Happy Thanksgiving – and ‘thank you’ to all of our volunteers

This Thanksgiving (and always!), we are all so very thankful for our wonderful volunteers! Thank you for all that you do! You have each truly made a difference!

Making a difference in Ethiopia

Farmer-to-Farmer volunteer David Olson returned from an assignment in Ethiopia last month. Enthusiastic about his trip and interactions with his trainees, David explains:

“There was such enthusiam of the group to learn [new techniques for meat processing]. Of the volunteer assignments that I’ve done, this was the best demonstration of my 10 years of doing volunteer work. It was so rewarding to see the expression on the face of one of the training participants, Biruk, when he cut his first rib-eye roll and realized that he actually knew what he was doing.”

Here are some photos of David in action: 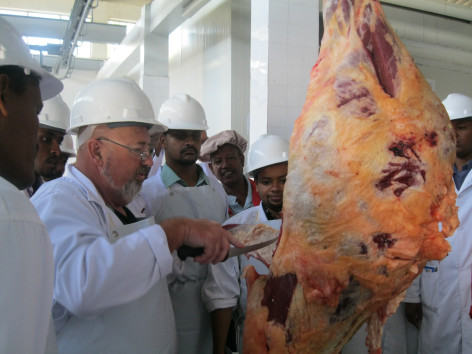 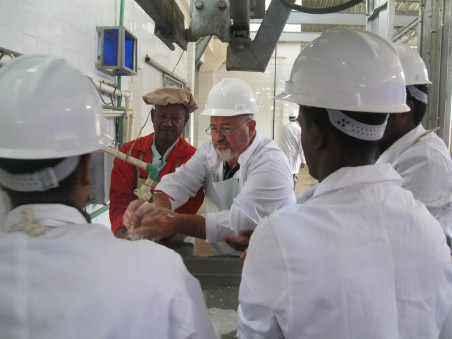 Women today benefit from a heightened presence on the political agendas of many governments and international organizations,and awareness about gender equality is at a higher level than ever. This progress notwithstanding, in many countries such as Mali, women lag far behind their male counterparts. According to UNICEF, only 30% of Malian women are literate, only 40% of girls regularly attend primary school, and only 17% regularly attend secondary (high) school. While the figures for men and boys are not that much more impressive, women definitely figure lower on the educational totem pole, and also suffer from traditional and religious constraints that prevent them from any rapid progress.

In a country where agricultural production comprises about 80% of economic activity, a classic education might not seem very important compared to the technical and vocational skills associated with agricultural production; however, when only two women amongst a group of 40 or 45 have basic reading and writing skills, simple accounting and record keeping tasks pose quite a challenge. Agricultural cooperatives – often times grouped by gender based on the crops they are producing – have an extremely difficult time moving forward if they don’t have a good idea where they stand, financially, or what their profits and losses are.

After almost six months in this country, and a slew of slightly frustrating conversations about gender equality, I am both optimistic and pessimistic about the future for the female population in Mali. In addition to the challenges posed by literacy, there are more subtle things that keep women from being as productive (read: profitable) as they could be. Most of these examples are anecdotal, but I think they are perhaps of more consequence than statistics or numbers.

Lala Walet, the gender focal point person at Winrock Mali, pointed out that women’s rights has been a huge focus of the government since independence, with the creation of the Ministry for the Promotion of Women, Children and the Family. The problem, however, stems more from the ‘basic education’ of children – not necessarily what they learn in school, but what they learn at home, in the street, and from the examples they see all around them. As a general rule, the woman is the caregiver of a family – she raises the children, takes care of the house, cooks and cleans. Anything she produces (in a market garden or community plot) is first and foremost destined to feed her family. A man will most often produce crops with the intention to market them. Because women’s production is often for domestic subsistence level consumption, higher quality seeds, costly inputs, trainings and technical assistance, and other resources that could improve productivity and profitability are often reserved for farmers selling their product.

A woman’s economic contribution to the family is most often of secondary importance to her duties as a wife and mother. If she is to be absent from the house for an extended period of time (for example, to attend a training workshop, or visit a neighboring village cooperative to see how they operate) she likely must ask the permission of her husband. That’s not to say that she won’t be allowed to participate, but to highlight the fact that there are definite barriers to the economic growth of women as a group. If they must continually ask for permission to move forward, their forward trajectory will necessarily be slowed.

Anais Troadec, an organizational development and project management specialist who concentrates on gender integration and mainstreaming, came to Mali with Winrock International to work with the women of a farming cooperative in Tienfala, about 30 km east of Bamako. In her initial assessment of the group, Troadec remarked that, “the women had never participated in the cooperative meetings nor did they give their opinions or make any decisions regarding financial matters,” and that before even beginning to talk about business or management skills, there were other obstacles to overcome. Barriers of self-image and self-confidence, cultural stereotypes that prevent women’s full inclusion in the co-op, and issues of communication between men and women were all subjects that had to be discussed before moving on to the business side of things.

Cultural perceptions and stereotypes play a huge role in keeping the status quo. Tradition dictates that women do not make any decisions regarding the future of the family or household, and this often translates to a women’s role in a cooperative. Men are pressured to be the sole provider in a family, and a woman’s economic contribution is negligible, if not discouraged.

After this training, there was a lot of excitement about women’s inclusion and involvement in the cooperative, and about moving forward in gender integration. In practice, however, tradition often trumps what is learned during trainings such as these. The culture and religion in Mali both have very specific notions about where and how women fit in to society, and this is hard to break out of. Even in the local language, Bambara, the word for woman means “patience and endurance” – she is seen as one who will endure hardship, and bear through difficult times; her traditional role is continually reinforced by her surroundings – both masculine and feminine.

Lala puts it best when she says that the elimination of poverty and human development are intrinsically linked to equality of the sexes and to empowering women. If over half of the population of a country are held back and not equipped to fully participate in the development of a country, the forward trajectory will be much slower than it’s potential. If, however, women and girls are encouraged to go to school, to learn a trade or a profession, and to be full participants in the progress and growth of a country, in that case I think the possibilities are endless.

The programs implemented by Winrock International Mali and the USAID Farmer-to-Farmer program put a strong emphasis on gender integration, trying to give a voice to women who have consistently been told that they are incapable or less capable than their male counterparts. Female volunteers are often recruited to work with groups of women producers to help reinforce the idea of women’s empowerment, and volunteers who come to Mali are briefed on gender issues so that they better understand the context in which they are working. By constantly emphasizing gender equality when working with both men and women, hopefully the ideas will become more engrained over time, and will be spread and shared by the participants of trainings and the people they work with.

I’ve had many drawn-out conversations with my colleagues in the office at Winrock, and with other people I’ve met and worked with about women’s roles in Mali and how it has changed over the years. Although there are still some very traditional ideas about women, the one thing I walk away with is a lot of hope. Most everyone seems to want things to change, and to me, that seems to be the most important driver.

International volunteerism is an ‘unbelievable opportunity’

Cliff Wener recently returned from an assignment with Winrock in Bangladesh and had much to say about the benefits of international volunteerism.

“It is an unbelievable opportunity to see what the world is all about. Now I see things related to countries I’ve been to, and it makes me a better citizen and helps me understand the world and U.S. politics better.”

Follow the link below to read more about Cliff’s thoughts on why volunteerism is important and what his international volunteer experiences have meant to him personally and professionally: https://winrock.org/volunteer/spotlight_cliff_wener.asp