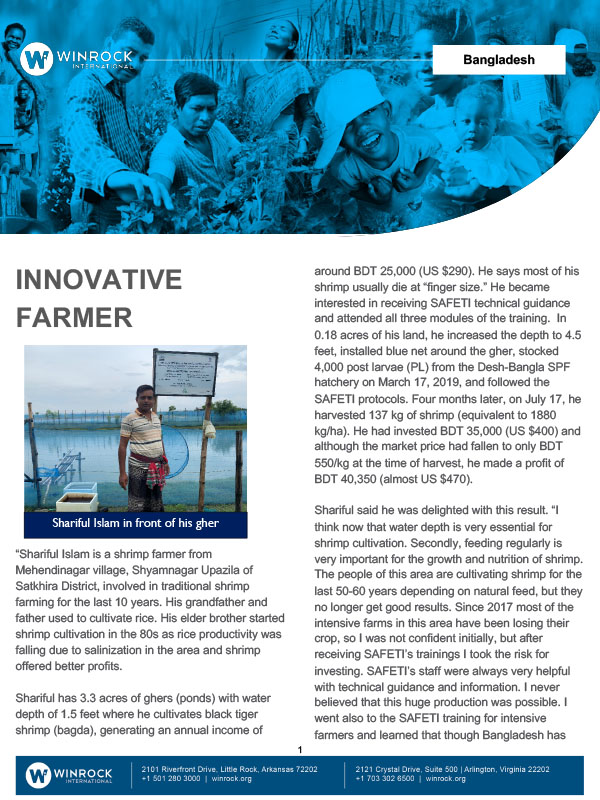 “Shariful Islam is a shrimp farmer from Mehendinagar village, Shyamnagar Upazila of Satkhira District, involved in traditional shrimp farming for the last 10 years. His grandfather and father used to cultivate rice. His elder brother started shrimp cultivation in the 80s as rice productivity was falling due to salinization in the area and shrimp offered better profits.

Shariful has 3.3 acres of ghers (ponds) with water depth of 1.5 feet where he cultivates black tiger shrimp (bagda), generating an annual income of around BDT 25,000 (US $290). He says most of his shrimp usually die at “finger size.” He became interested in receiving SAFETI technical guidance and attended all three modules of the training. In 0.18 acres of his land, he increased the depth to 4.5 feet, installed blue net around the gher, stocked 4,000 post larvae (PL) from the Desh-Bangla SPF hatchery on March 17, 2019, and followed the SAFETI protocols. Four months later, on July 17, he harvested 137 kg of shrimp (equivalent to 1880 kg/ha). He had invested BDT 35,000 (US $400) and although the market price had fallen to only BDT 550/kg at the time of harvest, he made a profit of BDT 40,350 (almost US $470).