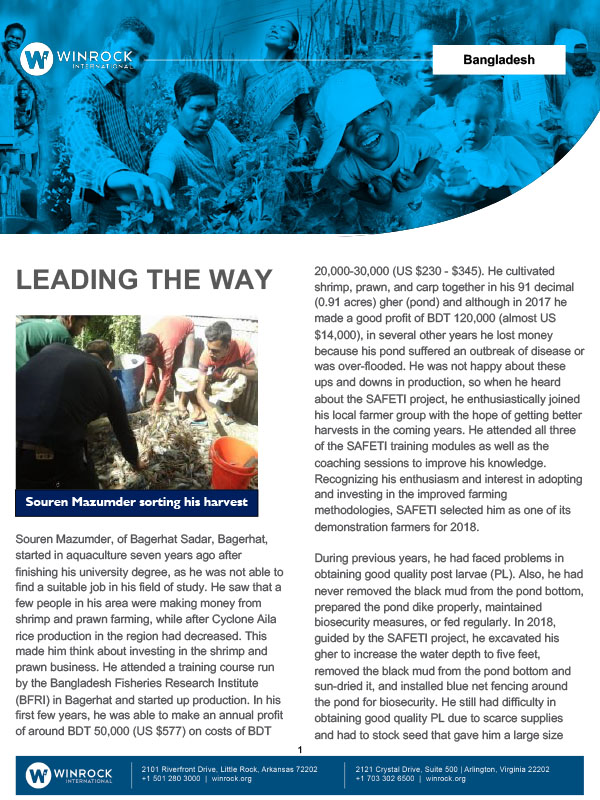 Souren Mazumder, of Bagerhat Sadar, Bagerhat, started in aquaculture seven years ago after finishing his university degree, as he was not able to find a suitable job in his field of study. He saw that a few people in his area were making money from shrimp and prawn farming, while after Cyclone Aila rice production in the region had decreased. This made him think about investing in the shrimp and prawn business. He attended a training course run by the Bangladesh Fisheries Research Institute (BFRI) in Bagerhat and started up production. In his first few years, he was able to make an annual profit of around BDT 50,000 (US $577) on costs of BDT 20,000-30,000 (US $230 – $345). He cultivated shrimp, prawn, and carp together in his 91 decimal (0.91 acres) gher (pond) and although in 2017 he made a good profit of BDT 120,000 (almost US $14,000), in several other years he lost money because his pond suffered an outbreak of disease or was over-flooded. He was not happy about these ups and downs in production, so when he heard about the SAFETI project, he enthusiastically joined his local farmer group with the hope of getting better harvests in the coming years. He attended all three of the SAFETI training modules as well as the coaching sessions to improve his knowledge. Recognizing his enthusiasm and interest in adopting and investing in the improved farming methodologies, SAFETI selected him as one of its demonstration farmers for 2018.