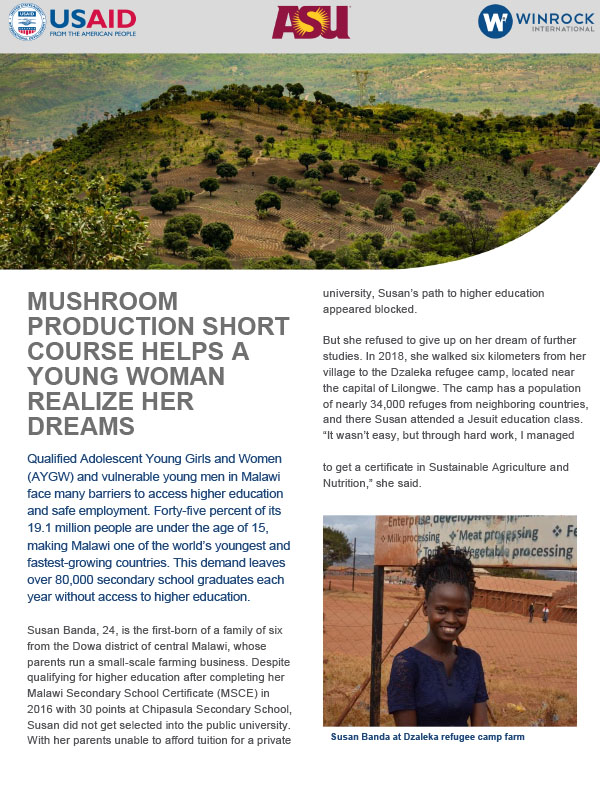 Qualified Adolescent Young Girls and Women (AYGW) and vulnerable young men in Malawi face many barriers to access Higher Education (HE) and safe employment. A country with one of the fastest growing populations and one of the youngest age structures in the world, where 45% of the 19.1 million total population is under 15 years of age, results in increasing pressure to use available resources. Due to various impediments, HE institutions leave over 80, 000 secondary school graduates each year without access to HE.

The story is not so different for Susan Banda, a brilliant young woman of 24 years and a first born in a family of 6 from Dowa district who completed her Malawi Secondary School Certificate (MSCE) with 30 points at Chipasula Secondary School in 2016. Despite being qualified for tertiary education, she did not get selected into the public university and her parents could not afford to pay tuition for a private university with a small-scale farming business. Susan was left helpless.

“Even without money or adequate resources, I did not give up on my dream to attend tertiary education. In 2018, I went to Dzaleka Refugee Camp, 6 kilometers from my village, to attend one of the courses which were offered to refugees by JESUIT services. It wasn’t easy, but through hard work, I managed to get a certificate in Sustainable Agriculture and Nutrition.” said Susan.

Life was still difficult for Susan and her family because she could not get job or an internship. Later in 2018, instead of staying idle at home, she volunteered to attend a second training of Youth Sport Facilitator offered to the camp refugees but that also did not change her luck.

Susan`s luck finally changed in February 2020 when she first heard, through WhatsApp, about a mushroom production short course offered at Lilongwe University of Agriculture and Natural Resources (LUANAR)-Bunda campus, supported by Strengthening Higher Education Access in Malawi Activity (SHEAMA) . SHEAMA is a 4-year USAID funded project for AGYW and vulnerable/disadvantaged youth. It is designed to increase Malawi’s skilled and employable (including self-employed) workforce by improving collaboration among HE institutions in Malawi and increasing the access, quality, quantity, relevance, and success of Open and Distance Learning (ODL) courses and degrees. Mushroom production short course, which ran for two weeks, was the first short course, offered by SHEAMA in partnership with LUANAR. A total number of 29 students attended the training from different districts across Malawi including Chitipa, Likoma, Salima and Chikwawa districts. There were15 female and 14 male students. Scholarships were offered to 26 students, 13 males and 13 females, including Susan Banda.

The delivery of the short course included industry participation, presented by a young entrepreneur and motivational speaker, Davis Chirwa, an alumnus of LUANAR who has ventured into the mushroom production business. He shared a brief presentation to show the students some of the new farming methods that he has adopted; cheap and affordable resources he uses to sustain his mushroom houses; and existing potential mushroom markets in Malawi.

Less than two months after the short course, Susan got a job at Churches Action in Relief and Development (CARD) in Dowa district as a coach. CARD implements a livelihood project at Dzaleka refugee camp which focuses on livestock, enterprise development and crop production including mushroom production. “In 2019, we did not do well as a project in mushroom production and our team was left frustrated. At the end of the season, we managed to harvest 55 kgs of mushroom from 225 kgs which we were expecting. Soon after Susan joined the team, we went to the farm, and using the skills and knowledge she acquired from the training, she was able to identify the mistakes which were made; starting from the incubation house to the production house which was built inappropriately and affected the spawning of the seeds to produce less harvest.” said the project coordinator Mr. Noel Nthala.

The next mushroom production of the project will commence in July 2020 and Susan will be the coach and supervisor of a team of 20 members to make sure that all the steps are followed in growing mushroom.

“It is a dream come true, my passion for mushroom production sparked in 2018 when I learned about the growing demand and market of mushroom on a WhatsApp forum called Permaculture. Now I have a job, I can ably support myself and my siblings to finish school. But this is not where my journey ends, I plan to save some of the money I earn from work to rent a field and harvest soya in the next season. I will sell the soya harvests and raise enough capital of about MWK 200, 000 to start my own mushroom production’’ said the young and ambitious Susan Banda.