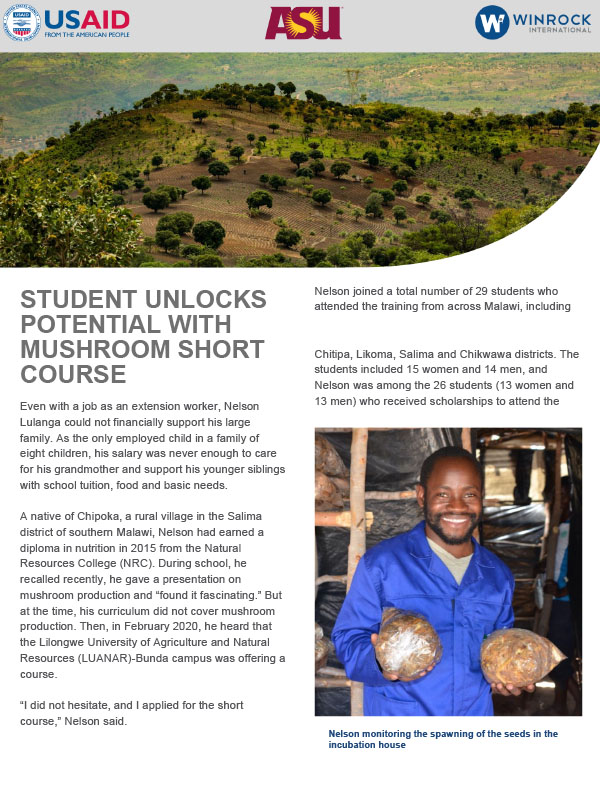 Even with a job as an extension worker, Nelson Lulanga could not financially support his large family. Being the only employed child in a family of 8 children, the salary was never enough to care for his grandmother, support his younger siblings with school tuition, food and basic needs. He could barely make the ends meet. Nelson comes from Chipoka, a southern rural village in Salima district, Malawi. He has a diploma in Nutrition obtained in 2015 at Natural Resources College (NRC).

“My interest in mushroom production started 5 years ago when I did a research in school and made a presentation on the topic even though my course curriculum did not cover mushroom production. I found it fascinating. When I heard that the course was being offered at Lilongwe University of Agriculture and Natural Resources (LUANAR)-Bunda campus in February 2020, I did not hesitate, and I applied for the short course.” said Nelson.

A total number of 29 students attended the training from different districts across Malawi including Chitipa, Likoma, Salima and Chikwawa districts. There were15 female and 14 male students. Scholarships were offered to 26 students, 13 males and 13 females including Nelson Lulanga. After attending the mushroom production short course supported by USAID through Strengthening Higher Education Access in Malawi Activity (SHEAMA) , he was motivated and inspired to venture into entrepreneurship.

Despite having big dreams, Nelson did not have any money, so he saved the money he received from SHEAMA as upkeep allowance to raise a capital of MWK 75,000. Using cheap and affordable resources from the village, he managed to build a 6 by 4-meter mushroom house with two rooms; a production room and an incubation room. Not only that, he used local community members in the village to help him make substrates and improvised to make sprayers using plastic bottles at small cost.

He bought 7 bottles of 350ml seeds at MWK 7,000 and he is expecting to harvest at least 600 kg of mushroom at the end of the season. The current market price of 250g mushroom is MWK500; Nelson is expecting to make a profit of no less than MWK1,000,000 from his small mushroom house.

As a young man, I can sustain myself and support my family with this business.

“My dream is to produce mushroom at a large scale and master the production of oyster mushroom. Currently, I employed other community members to support me with building mushroom houses, substrates making and packing at a small cost. If done at a larger scale, this will also promote the livelihood of members in this community. I will not stop there; I will also train other community members who have shown interest in mushroom production.”

Nelson has already developed flyers to advertise his produce, which have been distributed and shared through WhatsApp and social media. “From the feedback that I have been receiving, it shows that the demand of mushroom is high in the surrounding rural and urban areas, the harvests will not be enough.” said the young entrepreneur.

SHEAMA is working with University and Industry partners to identify market driven ODL programs from the high growth sectors in Malawi in order to increase the country’s skilled and employable (including self-employed) workforce.