Agroforestry for the Pacific Technologies
A publication of the Agroforestry Information Service
July 1993, Number 2

Tamarindus indica is best known for its delicious fruit. The brown, sticky, sour-sweet pulp is used widely as a flavor in a variety of dishes and drinks. 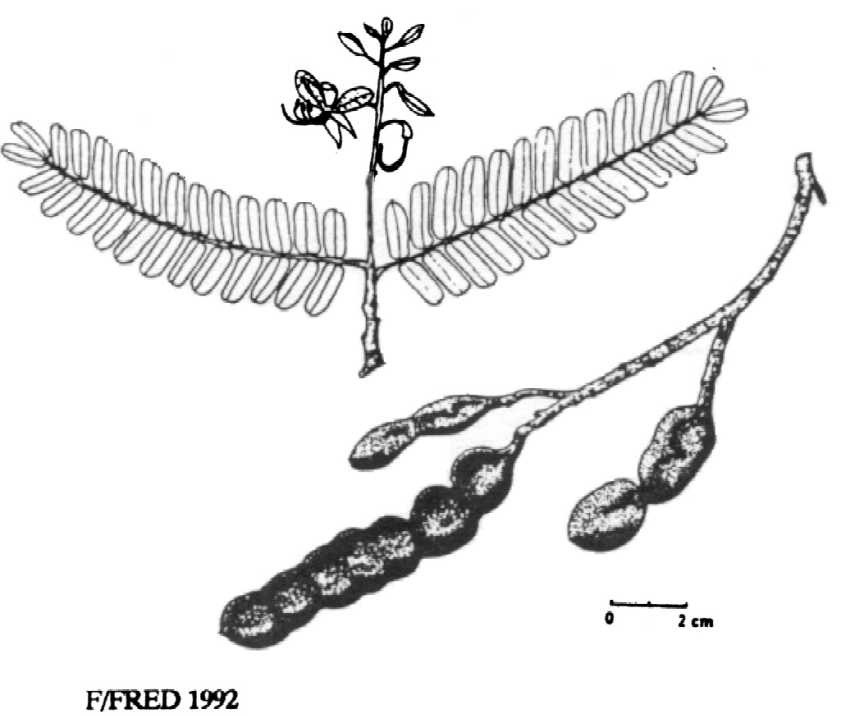 The usefulness of the tamarind tree does not end with its fruit. Sometimes compared to the coconut as another “tree of life”, it is widely adaptable and easily managed. It produces many valued food, medicine, wood and construction products. Drought resistant and strong, it performs well as a windbreak, preventing soil erosion and protecting people, crops and animals in harsh environments. Tamarindus also provides a handsome element in thousands of park, garden and roadside landscapes.

Botany
Tamarindus is a monotypic genus within the Caesalpiniaceae subfamily of legumes. It is large tree averaging 20 to 25 meters in height and 1 m in diameter. It has a wide, spreading crown and a short, stout trunk. The bark is strongly fissured and scaly grey on the stem and smooth on the branches. Leaves are alternate and paripinnate-each with 9 to 12 pairs of small leaflets. Small yellow flowers streaked with pink are contained in groups of 5 to 10 in drooping racemes 3 to 5 cm long. The pods are typically leguminous in appearance, oblong, straight or slightly curved, turning from green to dark brown as they ripen.
Tamarindus is slow growing but long lived. Individual trees commonly remain productive for 150 years or longer.

Ecology
A truly pantropical tree, Tamarindus indica performs well in both semi-arid and humid monsoonal climates Individual trees produce up to 50 kg of fruit in West Africa where rainfall often totals less than 500 mm a year. Tamarind also thrives in humid areas of Southeast Asia that receive more than 1500 mm of rainfall annually. It is found from sea level to 1500 m elevation.

Six- to eight-month droughts are common in most are-As where the tree is cultivated (F/FRED 19,02). Regardless of total annual rainfall, tamarind produces more fruit when subjected to a fairly long, annual dry period (Allen and Allen 1981; von Maydell 1986). Tamarind is not tolerant of persistent cold or brief frost. The tree prefers slightly acid (pH 5-5) deep alluvial, well-drained soils of loamy texture (von Maydell 1986). However, it also tolerates, a wide range of physical site characteristics. In Fiji, tamarind is successfully cultivated in soils of pH 4.5 to pH 8.7 (IIRR 1990). In India, it grows in soils with of pH 8.5 (Relwani 1993).

Tamarind cannot withstand stagnant inundation though it is often found on plains and stream banks where frequent flash flooding occurs. Because of its very deep, extensive root system, it can withstand violent typhoons and cyclones. It also tolerates the stiff, salty air of coastal areas (von Maydell 1986; von Carlowitz 1992).

Distribution
Tamarindus indica originated in tropical East Africa-probably Madagascar. Seafaring Arabian traders are thought to have spread seeds to Southeast Asia. Marco Polo mentions Tamarindus in the year 1298 (von Maydell, 1986). It is mentioned in Bhuddist sources from 650 AD and in Indian Brahmasamhita scriptures written between 1200 and 200 BC. Today tamarind is cultivated in India, Africa, Southeast Asia, Australia and the southern U.S. It is commonly known in India as “imli”, and in the Pacific as “tamirini”.

Uses
Fruit. Tamarind fruit is marketed worldwide in sauces, syrups and processed foods (F/FRED 1992). The soft, succulent pulp is used as a confectionery and an ingredient in curries, chutnies, preserves, pickles, sherbets and beverages. Nutrient composition is as follows: water 20.6%; protein 3.1%; fat 0.4%; carbohydrates (mostly sugars) 70.8%; fiber 3.0%; and ash 2.1% (Purseglove 1968). The tender pods can also be eaten as a vegetable–cooked or pickled. Reports of attainable fruit yields for individual trees vary widely depending upon degree of domestication. F/FRED (1992) reports an average yield at 10 to 50 kg per tree. ICRAF (1992) informants in semi-arid and humid India report yields of 800 and 500 kg respectively for domesticated trees. Once the seeds are extracted and the pods removed, tamarind pulp can be stored for several months in a compressed form. This is important in India where tamarind pulp yield averages 250,000 t annually, 3,000 t of which are exported (von Maydell 1986).

Ripe tamarind fruit has a widely recognized and proven medicinal value. The American pharmaceutical industry processes 100 t of tamarind pulp annually. The fruit is said to reduce fever and cure intestinal ailments. Its effectiveness against scurvy is well documented. It is a common ingredient in cardiac and blood sugar reducing medicines (von Maydell 1986). The pulp is also used as an astringent on skin infections.

Seeds. Young seeds contain an amber, sweet-tasting oil (10 to 15% by weight) (Allen and Allen 1981). This high-quality off has been used in varnishes and paints, for finishing Indian cloth, and as an illuminant. In India and Southeast Asia, tamarind seeds are also crushed and boiled to produce a paste that is used as a roofing material. This material is highly resistant to sea water and salt spray corrosion (PCRDF 1993).

The human nutritional value tamarind seed is quite low. It is used widely as animal feed, however, because ruminants are able to digest its complex starch.

The wood is hard and dense (900 kg/m3) and takes a fine polish (Allen and Allen 1981). Unfortunately, it is very difficult to work and the tree’s typically short bole limits its worth as sawn timber. It is, however, used extensively by local artisans and furniture makers.

Silviculture
The large brown seeds (2,000 to 2,500/kg) are viable only if removed from fresh, ripe pods. Seeds taken from dry fruit do not germinate well (von Maydell 1986). Germination normally occurs 7 to 10 days after sowing. The recommended seed treatments are scarification or an overnight soak in warm water. Seed can be sown in either seed beds or containers. Containers are recommended if seedlings will remain in the nursery for longer than four months. Thereafter, deep tap root development will make eventual lifting out and transplanting more difficult. Germinated seedlings should be shaded until they reach a height of about 30 cm. Clean seed can be stored for 3 to 4 years in a sealed moisture-free container (Relwani 1993).

Transplanting of bare-root seedlings requires extreme care as tamarind is especially susceptible to injury and denudation. Roots must be kept moist.

Orchards are usually planted at 12 x 12 in or 15 x 15 in (Relwani 1993). An effective windbreak can be created by planting one or two parallel lines of tamarind trees at 12 x 12 in. Small seedlings are susceptible to browsing damage and weed competition so some initial protection and spot weeding may be necessary. Young trees might also be tied to stakes to encourage a straighter stem form. In more arid climates, irrigation during the first dry season speeds growth substantially. Apart from these suggested treatments, once planted, tamarind trees require little management.

Tamarind starts bearing fruit at about 10 years, depending upon the environment. The fruit must be allowed to mature on the tree because fruit harvested prematurely has a highly acidic and fibrous pulp (von Maydell 1986). Mature fruit pods are cinnamon or dark brown and brittle.

Limitations
The primary limitations of Tamarindus are its slow growth and poor stem form. Unfortunately, although a legume, the species has not been observed to nodulate or fix atmospheric nitrogen

Further Reading
Allen, O.N. and Allen, E.K. 1981. The Leguminosae, A source book of characteristics, use; and nodulation. Madison WI (USA): The University of Wisconsin Press, pp. 641-42.