Agroforestry for the Pacific Technologies
A publication of the Agroforestry Information Service
September 1995, Number 15

Harvesting non-timber products such as fruits, oils, latex, gums, and fibers offer a way to use forests productively, while protecting them as reserves of biodiversity, wildlife habitat, and watersheds. Many plants produce oils which are important commercial products. Edible oils are usually processed from the seed of a wide variety of crops and forest species. Essential oils are extracted from many plant leaves, flowers, fruits, bark, wood, and roots. They are used in perfumes and cosmetics, medicinal products, pesticides and pest repellants, wood finishing and preservation, and various other industries. Many important essential oils are derived from tropical plant species such as nilam (Pogostemon cablin), lemon grass (Cymbopogon citratus), vetiver grass (Vetivaria zizanioides),sandalwood (Santalum spp.), cinnamon (Cinnamomum spp.), clove (Syzygium aromaticum), ylang-ylang (Cananga odorata), and cajuput (Melaleuca leucadendron).

The Java Social Forestry Project
The Java Social Forestry Project, funded through Ford Foundation grants to Winrock International and several other collaborating organizations, helped to sustain forest resources in an area of high population pressure and land scarcity. The project introduced improved agroforestry technologies which increase the employment and income earning opportunities of landless community members. Forest farmer groups cultivated annual and perennial crops in the open rows of timber plantations on land owned by the state forestry corporation. As their livelihood become more secure, the forest farmers’ motivation to protect the timber plantations also increased. As a result, tree survival and growth rose dramatically on sites that in previous years had been plagued by forest fire, illegal clearing, and timber theft. 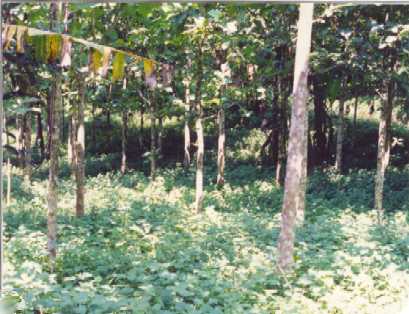 Farmers planted rice, corn and other annual crops between the rows of seedlings in newly reforested timber plantations. While the trees were young, harvests from these crops greatly increased family incomes.

However, once the forest canopy began to close, shade from the trees prevented further intercropping. Winrock worked with Indonesian forestry and agricultural research agencies to develop improved agroforestry systems that would allow farmer groups long-term access to the forest land in exchange for their continued cooperation in protecting the plantations and halting the recurring cycle of encroachment by surrounding communities. Shade tolerant understory crops were introduced through a participatory research and demonstration process.

Shade Tolerant Crops in the Understory 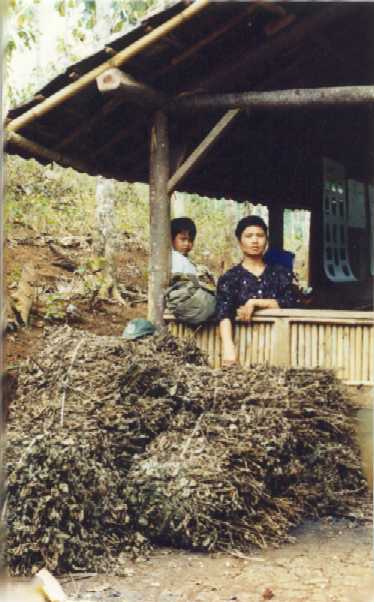 A member of the farmer group with bales of
dried nilam leaves ready for processing. (Photo: C. Stoney)

At one project site near Tasikmalaya in West Java, shade from a four-year-old teak stand prevented farmers from continuing to grow rice between the tree rows. Winrock, working in cooperation with local NGOs and Indonesian researchers, helped farmers to plant and manage trial plots to test shade tolerant crops that could thrive in the understory. One species, cardamom (Elettaria cardamomum), required more inputs than the farmers were interested in investing, and also did not produce a harvestable fruit until the second year of growth. Another of the species tested was a small, mint family shrub, Pogostemon cablin, which the farmers call nilam. The leaves of this shrub are harvested, dried, and processed by steam distillation to extract patchouli oil. The trial plots were productive enough to encourage other members of the farmer group to begin planting nilam under the canopy of the teak plantation, as well as under coconut palms on lands outside the forest.

The farmers initially sold the dried leaves to a factory in a nearby city, however, they were not satisfied with the prices paid for the product. Steam distillation is a fairly low-tech operation, and the leader of the farmer group at Tasikmalaya had some previous experience with it. A large boiler is filled with the dried plant material and water, which is boiled to produce steam. The steam containing the vaporized oils passes from the boiler through pipes, which are placed underwater in a small pond to cool. As the steam cools, the oil condenses and separates from the vapor. The oil can then be collected, purified, packaged and marketed.

Feasibility Studies: the First Step to Developing Rural Enterprises
In 1992 Winrock and its collaborating partner organizations assisted the farmer group to conduct a study of the feasibility of producing and marketing the patchouli oil themselves. After visiting a similar operation in a neighboring district, community members gathered information on local costs, and prices needed in the analysis of the enterprise. They had to determine the equipment and construction needs, the availability of fuel to heat the boiler, the availability of a year round water 1. source, the availability’ of nilam leaves to keep the process in operation, and local market conditions. Based on the analysis, a loan was obtained to cover part of the costs from the State Forestry Corporation, the agency that manages forest lands in Java. The State Forestry Corporation also agreed to make more forest lands available for intercropping with nilam to ensure that a sufficient supply of raw material would keep the operation profitable.

The steam distillation operation at Tasikmalaya used locally available materials including bamboo pipes and a second-hand boiler, which had previously been used for processing sugar cane. Since fuelwood is scarce in the area, dried coconut leaves are burned to heat the boiler. A small pond was excavated at the site to cool the pipes connected to the boiler. The total investment for the steam distillation operation was about US $5500, including equipment, construction, and start-up costs. The farmer owned operation was able to repay the loan within 2 years. Interest in planting nilam has spread within the community and to neighboring communities.

The scale of production is an important element in evaluating the feasibility of this type of microenterprise. According to a report in Indonesia Business Weekly (June 19, 1995), one of the main obstacles to increasing patchouli oil exports is the supply of raw materials. Because nilam leaves are produced by small holders cultivating in their home gardens, the supply of leaves for distillation is often limited and unreliable. Projects need to ensure that small holders have access to land to grow nilam on a large enough scale. If the scale becomes large enough to support a local distillery, the village can retain more of the income by processing the leaves themselves, rather than sending the leaves (and the profits) to a centralized processing site.

In 1994 the steam distillery added a second product line, cardamon oil, which is processed from cardamon seed husks. The cardamon oil is sold to a local company specializing in traditional medicines, which uses it in the preparation of a skin ointment, for export to Korea. Previously the husks had been a waste product with no commercial value. The cardamon husks are processed during the dry season when the nilam plants produce few new leaves. Because nilam is reproduced from cuttings, members of the original farmer group are also supplementing their income during the planting season by selling cuttings from their mature plants to other farmers who want to cultivate nilam.

Non-Timber Forest Enterprises Help Protect Forest Resources
By diversifying the use of timber plantations, the project increased the flow of benefits from the forest to local communities. The project was also able to forestall uncontrolled encroachment into protected forests and onto fragile sites, including steep slopes and watersheds, by providing people with legal access to forest land. The nilam shrub is a good crop to ensure protection of soils and water on forest lands and critical watersheds. It is a perennial crop, so it does not need to be replanted each year. After 3-4 years, frequent harvesting of the leaves will weaken the plant to the point that it needs to be replaced. During the interim, however, the soil is subject to much less disturbance than with annual cropping systems.

On sites with sufficiently high rainfall, nilam may be more productive in full sunlight. The species is shade tolerant, however, and can be grown under forest plantations; tree crops (oil palm, coconut, rubber); fruit tree orchards; home gardens; and other multistrata agroforestry systems. Intercropping nilam with an overstory component increases the overall productivity of a unit of land, as well as diversifying the cropping system. Farmers can get 2-3 harvests per year, beginning six months after planting. The flow of income from the understory crop may provide the incentive farmers need to allocate farm lands to an agroforestry system. Nilam is easy to propagate. As an understory crop on fairly fertile forest soils in West Java, nilam was productive with minimal fertilizer inputs. For optimal productivity, management and fertilization guidelines are given in Table 1.

Some of the plants from which essential oils are distilled have become important cash crops in Indonesia. Total exports of various Indonesian essential oils grew from 12,667 tons valued at US $64 million in 1993 to 16,669 tons valued at US $77.41 million in 1994. Patchouli oil, which is used as a binder ingredient in perfume and cosmetic manufacture, is one of the most important commercially produced essential oils in Indonesia, and constituted the largest percentage among the Indonesian essential oil exports. In 1993, Indonesia exported 1, 165,560 liters of patchouli oil worth US $19 million. In 1994, exports grow by 36.32% and 20.77% in volume and value terms, respectively, to reach 1,588,868 liters worth US $22.7 million. The export price for Indonesian patchouli oil ranges from $12 to $15 per liter, but could increase if quality standards and a more stable supply can be guaranteed. The main purchasers of Indonesian patchouli oil are the US (28.3%), Switzerland (14.0%) and France (12.9%).