NFTA 90-03, July 1990
A quick guide to useful nitrogen fixing trees from around the world

Acacia aneura is known as mulga in its native Australia where it is one of the best known species in the genus. Mulga is the Aboriginal word for a long narrow shield made of acacia wood. It is probably the most important woody forage plant in Australia because it is palatable, abundant and widespread in regions of low rainfall. Its use as an exotic, however, has been restricted by its relatively slow growth rate and its limited capacity to regenerate after fire or severe branch lopping. 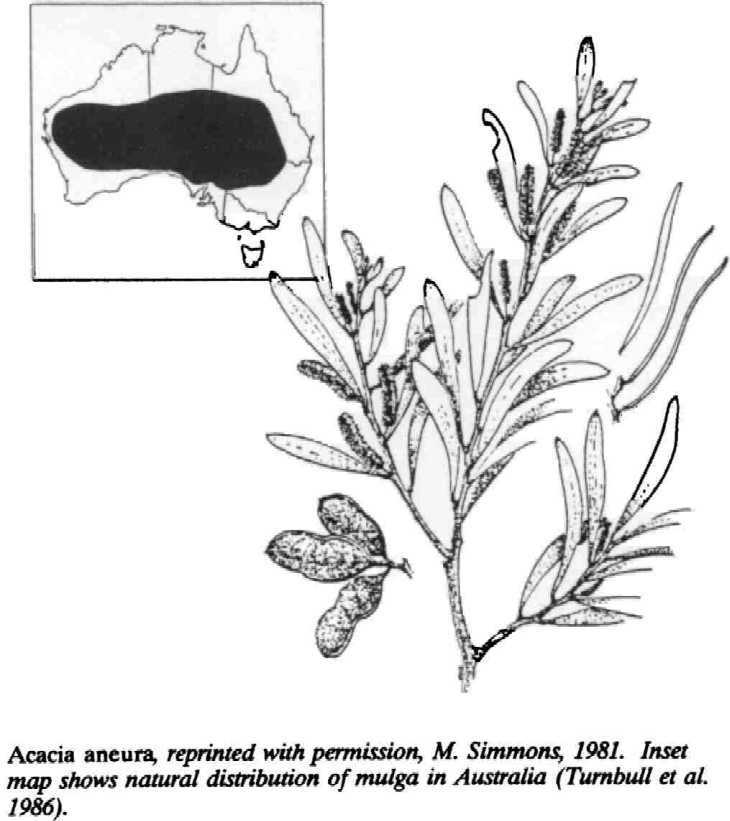 Botany
Acacia aneura F. Muell. ex Benth. is one of many thornless acacias endemic to Australia. It occurs as a 10-15 m tall, often single stemmed tree in higher rainfall areas but is a 2-3 m high shrub in dry situations or on very shallow soils. Its form and phyllode morphology are exceptionally variable (Midgley and Gunn 1985). The phyllodes range from short and needle-like to long (20 cm), broad (I cm) and flat. Very fine hairs give the foliage an attractive silvery-grey appearance.
Small yellow flowers form spikes 1.5-2.0 cm long. Thin,
flat membranous pods, 2-5 cm long, usually with an obvious narrow wing along their edge, contain dark brown seeds, each with a small pale aril at the base. Flowering depends on favorable weather conditions and only late summer flowering followed by winter rain leads to seed set (Davies 1976).

Ecology: Mulga is the one of the dominant species in Australian shrub woodlands. Natural populations extend over an area of 1.5 million km2 chiefly in the and climates where the annual rainfall is 200-250 mm. Mulga ranges in elevation from sea level to 300 m elevation. In many of the drier parts of its distribution mulga occurs as the only species in groves up to 50 m wide and 400 m long with intergrove areas acting as water catchments to provide substantial run-on water.

In the eastern part of its range in northern New South Wales and Queensland mulga is found in semiarid conditions with a mean annual rainfall of 300-500 mm. It experiences hot summers and coot winters with light frosts. Soils supporting mulga are usually acidic sands or sandy loams, which permit easy filtration of water into the upper horizons, but are usually very low in nitrogen and available phosphorus (Turnbull 1986). Acacia aneura can live for more than 50 years, it is drought-tolerant, but very fire sensitive (Kube 1987).

PROVENANCE TRIALS: The wide variability in soils and climate together with a high degree of polymorphism suggests that major provenance differences will occur in growth rates and drought and frost tolerance. International provenance trials were initiated in 1984 by FAO and CSIRO Division of Forestry and Forest Products, Canberra (Midgley and Gunn 1985) and trials were established in South Asia, the Middle East, Africa and South America.

WOOD USE: The heartwood of mulga is dark brown with contrasting markings of golden yellow; the sapwood is white. The wood is very hard, heavy (850-1100 kg/M3 ) and durable in the ground; it turns well and takes a high polish (Boland et al. 1984). Mulga also makes an excellent firewood and charcoal. In Australia the wood has been used extensively for fence posts but a log size rarely exceeding 2 in x 25 cm usually restricts the use of the wood to small turnery items.

FODDER. In many parts of Australia mulga forms a significant part of a sheep’s diet at all times of the year but without supplementary high quality feed it supplies protein and energy barely sufficient for maintenance of dry-range sheep (Goodchild and McMeniman 1987). Phyllodes have a high crude protein level (11-16%), low phosphorus content (0.05-0.1-2%) and good palatability (Turnbull et al. 1986, Vercoe in Boland, 1987). Excessive grazing may result in the death of mulga.

OTHER USES: Mulga can be used in and areas to provide shelter and shade, its attractive silvery grey foliage makes it a popular choice for amenity plantings. The Australian Aborigines ground the mulga seed for flour. The seeds have a protein content comparable to dried split peas or peanuts (Caffm et al. 1980). Aborigines also used the resinous phyllodes of desert mull form as an adhesive resin (Turnbull et al. 1986). 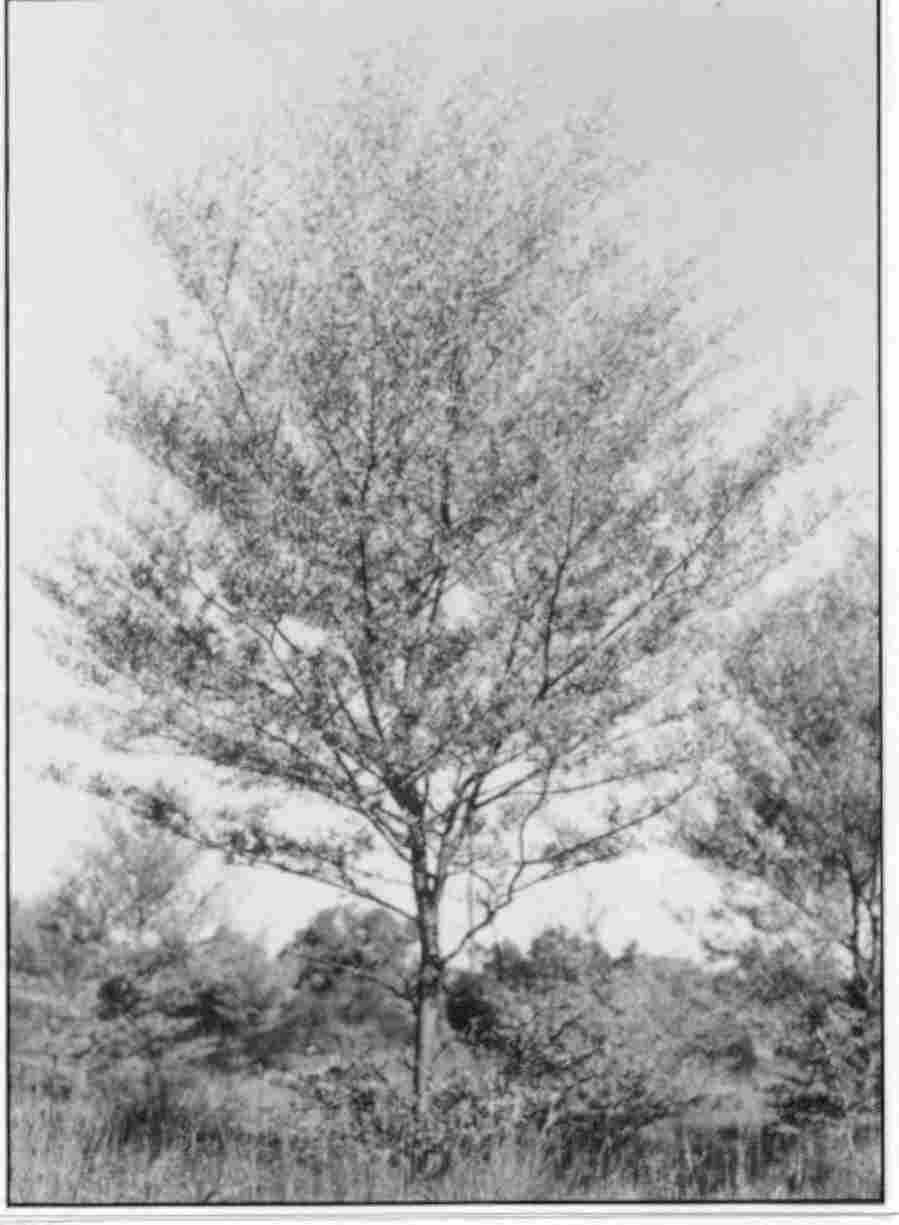 Acacia aneura (tree form) in a natural stand in Queensland.

ESTABLISHMENT: For good germination, seed (50,000-110,000/kg) should be scarified by mechanical abrasion or immersed in undiluted sulfuric acid (95% 36N) for 30 minutes and then thoroughly washed in water. Alternatively, immersion in hot water (90oC) for I minute will usually break dormancy (Doran and Gunn 1987). Seeds sown in a germination tray are ready for separating into containers within 10 days. The potting mix needs to drain freely but have good moisture holding capacity (Kube 1987).

Nursery growth is slow with seedlings often taking 6-8 months to reach 20 cm tall. When transplanted to the field the seedlings usually require several months without severe moisture stress to survive and in and areas may need supplementary irrigation. Established seedlings have the ability to survive severe drought. They develop a long tap root and an extensive lateral root system in the top 30 cm of the soil. Acacia aneura needs to be protected from browsing animals while young.

GROWTH: Growth rate is generally slow but is related to moisture conditions. In central Australia planted specimens receiving an average of 370 mm of rainfall a year grew in ten years into multi-stemmed shrubs 3 m tall and 2-4 cm dbh with a crown diameter of 2 m (Kube 1987). Cultivated specimens receiving regular irrigation have reached 10 m tall and 10 cm dbh in 10 years. In trials where rainfall is relatively high, the Charleville, Queensland provenance, a broad phyllode form, has grown more rapidly than provenances from central Australia (Ryan and Bell 1989). Trees with different phyllode forms have been observed to have different growth rates (Fox 1980).

SYMBIOSIS: A. aneura forms nodules with Rhizobium with which it exhibits a degree of specificity (Roughley 1987). Ectomycorrhizal associations have been observed and there is almost certainly VA mycorrhizal symbiosis (Reddell and Warren 1987).

PESTS AND DISEASES: In its natural habitat A. aneura is subject to partial defoliation by a range of insects and root damage by termites. Termite damage was light (4% mortality) to moderate (30% mortality) to two provenances aged 18 months in a trial in Zimbabwe (Mitchell 1989).

WEEDINESS: With its relatively slow growth rate and irregular seeding habits A. aneura is unlikely to become a serious weed.

Davies, SJJ.F. 1976. Studies of the flowering season and fruit production of some and zone shrubs and trees in western Australia. J. of Ecology 64:665-687.