FACT 99-01, January 1999
A quick guide to multipurpose trees from around the world

Acacia angustissima (Miller) Kuntze is a member of the Mimosaceae family and is thought to have originated in Belize, Central America (Dzowela 1994). Until recently very little work or study had been carried out on A. angustissima, but there is new interest in the use of this species in agroforestry systems due to its high potential growth rate and nitrogen fixing capabilities. Its common names include white ball acacia, fernleaf acacia and prairie acacia in the USA, while in Mexico and Central America it is known as barba de chivo, cantemo, guajillo, palo de pulque timbe and timbre. Acacia angustissima is closely related to and often confused botanically with A. boliviana and A. villosa (Gutteridge 1994). 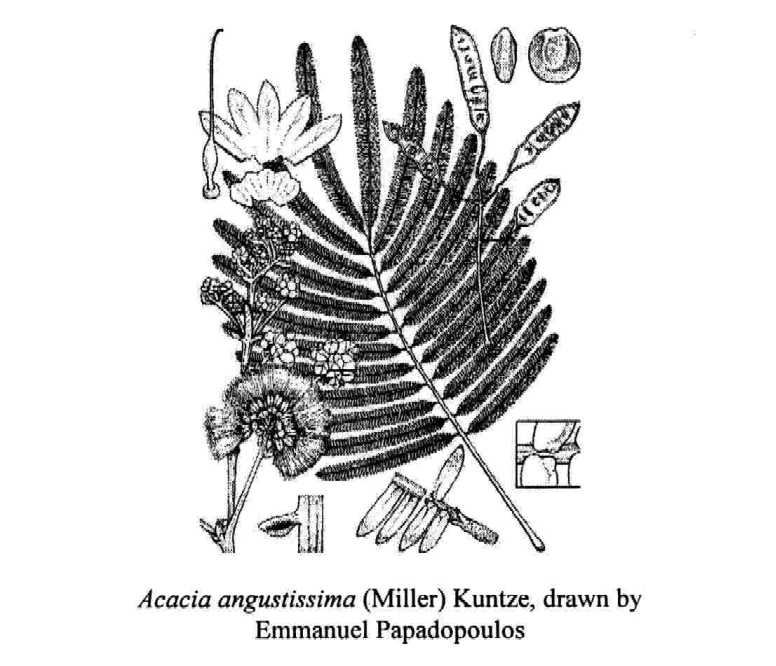 Botany
Turner (1996) carried out the most recent general study on Acacia angustissima. He recognized A. angustissima as having six intergrading varieties (var. angustissima; var. hirta; var. suffruticosa; var. chisosiana; var. leucothrix and var. oaxacana). Acacia angustissima grows as a thornless shrub or small tree mostly 2-7 m high with a single short trunk. It exhibits much variation in pubescence (almost none, or of the branchlets mostly of short appressed hairs), in size and venation of the leaflets, and in size of flowers and heads (McVaugh 1987). The leaves are mostly asymmetric with a displaced mid-vein and 10-25 cm long, with 10-20 pairs of pinnae and leaflets without secondary venation (Isely 1973, Turner 1996). The inflorescences are ellipsoidal with whitish heads 1-1.5 cm in diameter, turning pinkish to dull orange when dried (McVaugh 1987). The species flowers throughout the year in its natural range, and at the end of the dry season in trials in Zimbabwe (Dzowela 1994). The pod is oblong, 3-6 cm long and 6-9 mm wide, with straight or sinuate margins (Isely 1973). The pods are initially green, turning coffee-brown as they ripen (Dzowela 1994).

Ecology
In its natural range A. angustissima is found on hillsides, rock slopes, summits, and in grassland with other shrubs. It is often found in tropical deciduous or semi-deciduous forest (McVaugh 1987). In the native range, annual rainfall varies from 895-2870 mm, and mean temperature ranges are between 5° and 30°C. It grows from near sea level to 2600 m, but shows better growth potential at higher elevations. At lowland sites (20 m) in Papua New Guinea, A. angustissima flowered but did not seed, while at higher elevation (1650 m) it seeded prolifically (Brook et al. 1992). It tolerates cold climates (occasional temperatures below freezing) and free-draining acid soils (Dzowela 1994). It also withstands periods of drought, possibly due to its substantial taproot. It retains green foliage in the long (8-month) dry season in Timor, Indonesia (Gutteridge 1994).

Acacia angustissima grows rapidly and responds well to regular cutting. However, it produces weak branches that break off in moderate winds (Brook et al. 1992). This ability to grow quickly has resulted in A. angustissima becoming weedy and forming thickets, especially along roadsides and in sandy soil in pastures in its native range (McVaugh 1987). This weed potential has created concern among some researchers about the advisability of its use in agroforestry or agricultural systems (Bray et al. 1997).

Distribution
Acacia angustissima occurs in tropical and subtropical mesic habitats along both sides of Mexico from the states of Jalisco and Nuevo Leon southward to Panama (Turner 1996). Acacia angustissima is now also commonly found in Southeast Asia, particularly Indonesia, as well as in Australia, where it is used in experiments. There are similar experiments in Zimbabwe, Ethiopia, Hawaii, Haiti, Papua New Guinea, Brazil, and Indonesia to determine its potential as a fodder or mulch crop in tropical countries.

Uses
Fodder. Acacia angustissima produces large amounts of foliage with fodder potential. The crown architecture enables the tree to withstand frequent cuttings or defoliation with a high recovery and growth rate (Gutteridge 1994). Acacia angustissima has also been shown to respond well to coppicing. Biomass production has been shown to range from 10.3 t DM ha-1 (Dzowela et al. 1997) to 11.4 t DM ha-1 (Brook et al. 1992) at 2-m spacing. At 3-m spacing the biomass increases to a range from 11.5 t DM ha-1 (Bino 1997) to 12.4 t DM ha-1 (Isaac et al. 1994). These figures are based on cutting the trees back to 50 cm above ground level and on yearly cuttings taken during, and/or at the end of the wet season. Research shows that A. angustissima cuttings contain high levels of N, P and K, but due to a high tannin content (6% DM), the protein is less accessible to the livestock. Tests have shown that Acacia angustissima leaves degrade poorly in the rumen of cows (48% after 48 hours of incubation) (Dzowela 1994). Bray et al. (1997) found similar results noting that Acacia angustissima produced significantly more leaves than other shrub legumes, notably Leucaena spp., Calliandra calothyrsus, Gliricidia sepium, Cajuns cajan, and Sesbania spp. But he also concluded that even though A. angustissima has the potential to produce a high leaf yield, the high tannin content and low palatability means it is of limited nutritional value to livestock.

During feeding trials at the International Livestock Research Institute (ILRI) in Ethiopia, sheep fed 300 g of A. angustissima supplement per head per day died between 9 days and 21 days after consuming only 75-100 g per head per day at any time (Odenyo et al. 1997). This shows that the feed may contain toxins, and that the sheep did not particularly like it. Gutteridge (1994) found conflicting information regarding palatability and intake by livestock. In some areas of Indonesia A. angustissima leaf is reported to be eaten well and is regarded as an important source of forage. Additional trials are needed to evaluate the use of fresh and dry leaf for livestock feed, and to document any toxicity problems.

Farming systems. No information has been found about A. angustissima being used within farming systems in its native habitat. Elsewhere, research has been carried out to try and determine the tree’s potential as a multipurpose tree to be used in agroforestry systems. In Papua New Guinea, trials have been carried out using A. angustissima in an alley cropping system intercropped with sweet potato. Acacia angustissima provided enough N, P and K for the crop, but due to the rapid growth shaded the crop and inhibited the tuber yield (Brook 1993). During other trials its potential as a mulch producer has come into question, because of the presence of secondary compounds that bind the N and result in low-quality (slowly decomposing) prunings. This may mean that the mulch is a poor N source for the present crop, but it may have greater residual effects that could benefit the subsequent crop, or be a good N source to help build up organic matter in the soil (Dzowela 1994, Mafongoya et al. 1997). These long-term benefits could outweigh the initial low nutrient return to the soil over a number of years. Slowly decomposing prunings may have value for suppressing weed growth in associated crops.

Other uses. Although A. angustissima is not commonly used for agroforestry in its native range, it is an important medicinal species for the Tzotzil and Tzeltal Maya Indians in Mexico. They rank it the 4th most important species in the cure of bloody diarrhea and 7th in the treatment of mucoid diarrhea. It is also used as a cure for toothache, rheumatism and skin lesions, and is reported to inhibit growth in malignant tumors. Tests also show that A. angustissima possesses a mild antimicrobial effect on Escherichia coli and Staphylococcus aureus (Berlin et al. 1996). The bitter astringent bark is also used in Mexico for precipitating mucilaginous matter and inducing fermentation in the making of alcoholic drinks (Graham 1941). During laboratory tests A. angustissima has been shown to completely inhibit growth (after 48 hours) of Staphylococcus aureus, Bacillus subtilis, Klebsiella pneumoniae, and Candida albicans (Hoffman et al. 1993). This indicates that A. angustissima has the potential to be used in applications against human diseases caused by bacteria and yeasts.

Silviculture
Propagation. Acacia angustissima seems to fare better when grown from transplanted seedlings then from direct seeding. If it is to be directly seeded, then it is important not to sow too deeply. Roshetko et al. (1995) suggested sowing the seed on the surface of cultivated soil and covering with a layer of soil equal to the width of the seed. Weeds can suppress early growth and the establishment of the seedling; it is therefore necessary to maintain a weed free zone around the seed or seedling for successful establishment (Maasdorp and Gutteridge 1986).

Pretreatment of seeds has been described by Roshetko et al. (1995)—the best results for germination came from 12 hours soaking in cool water before sowing. The standard hot-water treatment (a two-minute soak in hot water followed by 12 hours in cool water) resulted in inferior germination. Shelton (1994) suggested scratching or nicking the round end of each seed with a file, knife or nail clipper (without damaging the cotyledon) before sowing.

The seeds are very small, 90,000-100,000 seeds/kg, and initially green then a coffee-brown. Acacia angustissima forms an association with soil Rhizobium to fix atmospheric nitrogen. When introducing A. angustissima into a new area it may be necessary to inoculate with an appropriate Rhizobium before planting. FACT Net’s site on the world wide web has a list of suppliers of seed and Rhizobium bacteria.

Fertilization. The application of fertilizer to A. angustissima has been shown to have different effects depending on when added. Fertilizer added to seeds had a negative effect on emergence and did not improve the competitive ability of the seedling against weeds once it started to grow (Maasdorp and Gutteridge 1986). Once A. angustissima is established the application of fertilizer has a positive effect on the growth of the tree (7-fold increase in crown volume on acid soils (Cole et al. 1996)). Costa and Paulino (1997) estimated that 53.8 mg/kg K and 104.2 mg/kg P would give maximum dry matter production and showed that nodulation significantly improved with K and P fertilization.

Pests. In its native habitat A. angustissima is eaten by the Acacia skipper butterfly, Cogia hippalus, and by the moth larva of Sphingicampa blanchardi and S. raspa. Two local birds also eat the seeds, the masked bobwhite and the Arizona scaled quail (Graham 1941). In trials in Hawaii the tree has been shown to be naturally resistant to attack from the Chinese rose beetle (Cole et al. 1996).

A full set of references is available from FACT Net