Acacia holosericea – A Successful Newcomer for the Dry Tropics

NFTA 88-04, August 1988
A quick guide to useful nitrogen fixing trees from around the world

This shrubby acacia is little used in its native Australia, yet it promises to be an outstanding multipurpose ne for the dry tropics. Its excellent potential for fuel, charcoal, animal fodder, land rehabilitation and as an ornamental is now being realized in Africa and the Indian subcontinent 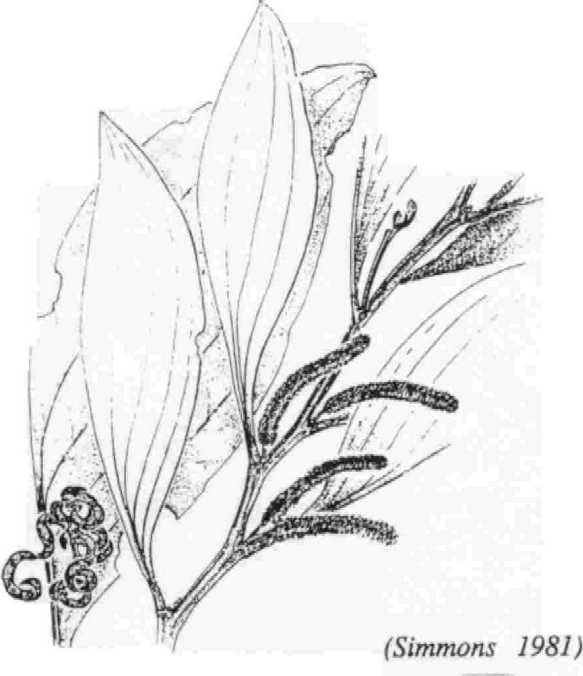 BOTANY: A. holosericea A. Cunn. ex G. Don is one of some 850 thornless species of the genus endemic to Australia. It bears large phyllodes, 10-25 cm long and 1.5 to 10 cm broad, usually covered densely with fine hairs, giving the tree attractive silvery foliage. Small bright yellow flowers are aggregated in prominent spikes 3-6 cm long. Narrow, hairless pods, 3-6 can long, are coiled in dense clusters and contain shiny black seeds, each with a yellow aril at the base. Flowering is heavy and precocious, and abundant crops of mature seeds may be formed within two years of planting. It commonly forms a spreading shrub to 5 m in height with many ascending branches from just above ground level. Occasionally it grows as a small tree up to 8 m in height.

ECOLOGY: Natural populations occur in a wide range of tropical climates. In semiarid areas mean annual rainfall can be as low as 300 mm and in these conditions it is confined to seasonally dry stream banks. Throughout much of its natural distribution annual rainfall is 600-1200 mm with most rain concentrated in four months. It does occur, however, in areas where rainfall exceeds 1500 mm (Booth and Jovanovic 1988). Most of the distribution is frost-free, but up to ten frosts each year occur at some inland sites. It occurs on a variety of soil types, but mainly on shallow, acidic, stony sands and loarns of low fertility (Turnbull, et al. 1986).

In Senegal, tests have shown that the species behaves satisfactorily with rainfall over 500 mm in areas under coastal influences and over 600 mm in continental Africa (Cossalter 1987). In extremely dry areas when annual rainfall is less dm 250-300 mm seedlings can survive for 2 to 3 years but then die. In the island environment of Cape Verde, however, where low rainfall is counterbalanced by higher air moisture, cooler temperatures and lower evapotranspiration, A. holosericea has withstood an average annual rainfall of about 200 nun in a 5-year period.

The wide variability in soils and climate suggest major provenance differences will occur in growth rates and drought and frost tolerance. Provenance trials have been started, but results are not yet available.

FUELWOOD AND CHARCOAL: The wood is hard and has a high density of about 870 kg/m3. With calorific values for wood and charcoal of 4670 Kcal/kg and 7535 Kcal/kg, respectively; it is a good quality fuel (Cossalter 1987; CTFF 1983). The rapid early growth rate makes it a highly productive fuelwood source.

FODDER: The fodder potential is mainly due to the large phyllode biomass produced during the dry
season, a period when most non-Australian acacias traditionally used for fodder shed their leaves. Fresh phyllodes are not palatable for cattle and sheep, but when the branches are lopped the dry foliage is eaten readily. Four-year-old trees in Senegal have produced about 3 tons of dry phyllodes per hectare, but estimates of crude protein and in vivo digestibility are low and suggest A. holosericea has a low feed value (Vercoe 1987).

WINDBREAKS & LAND REHABELITATION: The large, dense crown of this shrubby acacia enables it to form a screen. In Africa it is used to form the lower part of a multistorey windbreak with the taller Eucalyptus camaldulensis, a species with which it is frequently found in its natural range (Hamel 1980).

Advantage can be taken of the fast growth, dense crown, nitrogen fixing ability and vigorous colonizing characteristic of this species to revegetate and restore degraded mining areas (Langkamp and Dalling 1983). It also shows promise for sand dune fixation in Senegal and Somalia (Hamel 1980).

ESTABLISHMENT: For good germination, seed (95,500 to 175,000/kg) should be scarified by mechanical abrasion or immersed for one minute in boiling (100oC) water. Coppicing is generally regarded as poor, but contradictory reports suggest its resprouting ability may be influenced by tree age, season of cutting and height at which the cutting takes place.

GROWTH: Seedling growth is rapid. On favorable sites in Central Australia it has reached 4 m tall in 18 months. On drier sites 3 m growth in 3 years is average, and growth rate diminishes in succeeding years (Kube 1987). In Senegal a growth rate of 4.8 m in 40 months has been recorded in an area with 585 mm rainfall and a 7-month dry season (Cossaiter 1987). At Bambey, Senegal, 4 year old Acacia holosericea produced 13 tons/ha of green wood and ahnost 3 tons/ha of dry phyllodes, demonstrating its considerably greater productivity dm the local Acacia senegal.

PESTS: This acacia appears to be relatively free of pests and diseases in cultivation and resists termite attack.

PROBLEMS: The early and abundant seeding habit has the potential to make A. holosericea a weed species under certain conditions. Like many acacias, it is relatively short-lived, from as little as 4-5 years to not more than 10-12 years, and this may be a problem under some circumstances.