Acacia leucophloea – shade and fodder for livestock in and environments

FACT 96-04, June 1996
A quick guide to multipurpose trees from around the world

Native to arid areas in South and Southeast Asia, Acacia leucophloea (syn. Mimosa leucophloea) is easily identified by its white bark and large wide spreading limbs. It is most often utilized as shade for livestock and as a source of dry-season fodder. Growing well on alluvial or infertile soils, A. leucophloea also has great potential as a reforestation species for degraded sites. Currently, it is not commonly planted for this purpose. Common names for this species often refer to its light color; white-bark acacia (English), safed kikkar (Hindi), safed babul (Bengali), goira (Oriya), sarai, velvelam (Tamil). Other common names include pilang and besok (Indonesian). 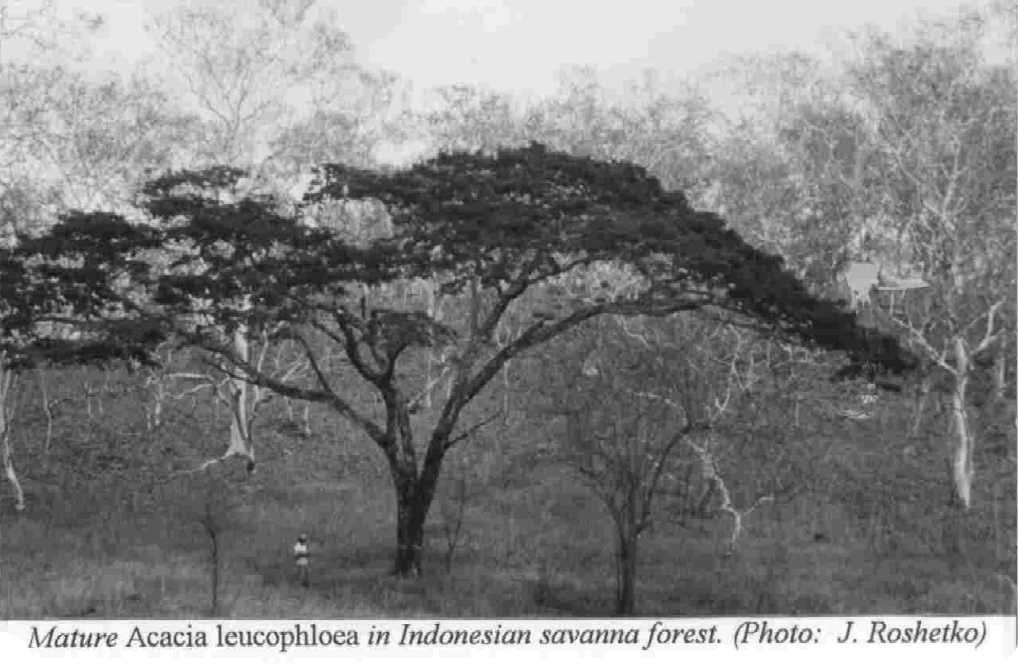 Botany
Acacia leucophloea (Roxb.) Willd. (Leguminosae Mimosoideae) is a large thorny tree attaining heights of 35 m and diameters at breast height (dbh) of 100 cm (Nielsen 1992, Heyne 1950). It may be deciduous. Mature trees become less thorny and can live to be 100 years old. Trunks are stout, dividing into several large diameter branches. Open-grown specimens have a characteristic wide umbrella-like crown. In India, the trunk is often crooked (Troup 1983), but reported as straight in Indonesia (Heyne 1950). Generally, the bark is white to yellowish gray, smooth and exfoliates in long strips. On old trees, the bark becomes black and rough (Troup 1983, Heyne 1950). In harsh environments and on poor soils this species remains a shrub or small malformed tree.

The feathery green foliage offers a strong contrast to the light-colored bark. Leaves are bipinnately compound having 5-30 pairs of leaflets. Circular glands are found on the rachis below the junction of paired-pinnae (Nielsen 1992, Troup 1983). Spines, 2-5 mm long, occur at the base of leaves. The leaves may fall during the cold or dry seasons and regrow with the rains. The conspicuous flowers are light-yellow to cream in color and are borne in abundance during the rainy season. Flowering occurs July through November in India (Troup 1983) and December through March in Indonesia (Djogo 1992). The pods are yellow, green or brown in color, flat and fairly straight. They measure 10-20 cm long, 5-10 mm wide and ripen from February to June in India (Troup1983) and July to September in Timor (Djogo 1992). Pods should be collected before they split and disperse their seed. Healthy pods contain 10-20 smooth oblong seeds of dark brown color and 6×4 mm in size (Kumar and Bhanja 1992).

Ecology
Acacia leucophloea is a component of dry-forests, savannas, bush woodlands, and desert ecosystems from sea level to elevations of 800 m. In these areas, rainfall is only 400-1500 mm/year and dry seasons may persist for 9-10 months. Temperatures are extreme, varying from -1° to 49° C.

Distribution
Acacia leucophloea’s native range through South and Southeast Asia is non-contiguous. Its largest continuous distribution is arid India through Sri Lanka, Bangladesh, Burma and much of Thailand. Other populations occur in southern Vietnam; Java and Bali of central Indonesia; and Timor of eastern Indonesia (Nielsen 1992, Troup 1983). This species has not been widely introduced to other regions.

Uses
Wood.
The wood of this species is strong, heavy and hard with a specific gravity of 0.71. It seasons well and takes a good polish (Troup 1983). The brick-red heartwood is very beautiful and is used to make decorative furniture. The pale yellow sapwood is perishable. Commodities produced from the wood include poles, farming implements, carts, wheels, turnery, construction timbers and fuel. The utilization of this species is limited because its wood has irregular interlocked grain, a rough texture, is difficult to work and is not durable

Fodder and Pasture. Acacia leucophloea is an important dry-season fodder and pasture tree throughout its range. Leaves, tender shoots and pods are eagerly eaten by goats, sheep and cattle. Singh (1982) reports that leaves contain 15% crude protein and 19% crude fiber. However, due to hydrocyanic acid toxicity A. leucophloea should not be used as a sole feed (Bhadoria and Gupta 1981). During dry seasons, this tree protects livestock and understory pasture from excessive temperatures. Grass beneath the trees remains succulent while exposed grass becomes dry and unpalatable. In eastern Indonesia, populations of this species have declined significantly due to heavy use as a dry-season fodder. Farmers do not replant A. leucophloea because of its slow growth.

Other uses.
The inner bark of A. leucophloea has a foul aroma. It produces a reddish-brown stain used to manufacture dyes and tannins (Heyne 1950). Fibers from the inner bark are used to make fish nets and rough rope. Additionally, a water soluble gum of fair quality can be extracted from the bark. The leaves yield a black dye and the bark produces tannin and dye (Heyne 1950, Troup 1983). Heyne (1950) reports the bark is used to distill liquor in India and seed sprouts are eaten as vegetables in Java. The vivid colors of its leaves, flowers and bark make A. leucophloea a beautiful, yet underutilized, ornamental tree.

Silviculture
Propagation. Seeds of A. leucophloea (37,000-50,000/kg) have hard seedcoats. Under natural conditions they germinate unevenly. To encourage uniform germination, seed should be scarified. Two methods are recommended: 1) submerge seeds in boiled water until the water cools – roughly 24 hours, or 2) soak seeds in sulfuric acid for 10-30 minutes followed by a cool water soak for 24 hours (Kumar and Bhanja 1992). The visibly swollen seeds should be removed from the water and sown immediately.

Management. Acacia leucophloea can be established by direct sowing, stump sprouts or seedlings. Direct sowing is preferred because the large roots of seedlings may hamper transplanting. Troup (1983) recommends the following method. Immediately prior to the rainy season, the sowing site should be cleared of weeds and the soil well cultivated. When the rains arrive sow scarified seed at a depth of 1 cm. Germination begins within a week.

Seedlings are sensitive to vegetative competition and browse damage. Weed control must be maintained for a minimum of two years. Livestock must be excluded from plantations until trees are beyond their reach. Annual cultivation around the seedlings improves growth and survival. Interplanting A. leucophloea at low densities with crops or pasture grasses can benefit both crops and trees (Troup 1983, Djogo 1992). Although this species is slow growing it should not be disregarded. Acacia leucophloea is a good reforestation species for poor soils in low rainfall areas. Otherwise underutilized, these sites could become useful fodder and fuel plantations.

Symbiosis
Acacia leucophloea fixes atmospheric nitrogen through a symbiotic relationship with Rhizobium bacteria which enables it to survive on infertile sites. Quantitative information concerning the amount of nitrogen fixed in this relationship is lacking.

Limitations
The wide crown of A. leucophloea competes with adjacent crops for sunlight, limiting the trees usefulness on farms. The wood degrades quickly and is difficult to work.

A full set of references is available from FACT Net