NFTA 92-04, June 1992
A quick guide to useful nitrogen fixing trees from around the world

Acacia nilotica (L.) Willd. ex Del. (Leguminosae, subfamily Mimosoideae) is one of about 135 thorny African Acacia species. Variation is considerable with nine subspecies presently recognized, three occurring in the Indian subcontinent and six throughout Africa (Brenan 1983.) They are distinguished by the shape and pubescense of pods and the habit of the tree. 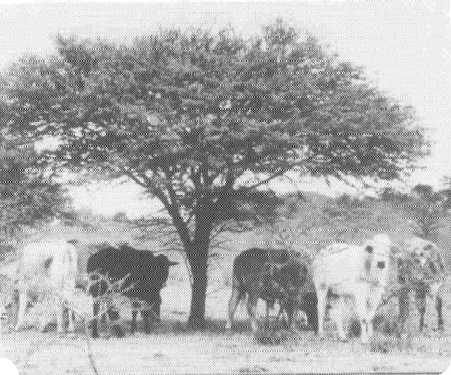 Botany
In habit A. nilotica varies from a shrubby tree with wide spreading crowns in savanna habitats (ssp. subalata, leiocarpa, adstringens, hemispherica and kraussiana), to a 20 meter tree (ssp. nilotica, tomentosa, and indica) in riverine situations. Ssp. cupressiformis has ascending branches like a poplar.

Acacia nilotica is easy to recognize by its bright yellow flowers in round heads, straight stipular spines often slightly deflexed, and dark indehiscent pods compressed over the seeds. Flowering is prolific, and can occur a number of times in a season. Often only about 0.1% of flowers set pods (Tybirk 1989.) The taxa form a polyploid complex most are tetraploids (2n=4x=52); but higher numbers have been found in ssp. nilotica (2n=8x=104) & ssp. tomentosa (2n=16x=208) (Nongonierma 1976.)

On the subcontinent, ssp. indica forms low altitude dry forests usually on alluvium and black cotton soils. It has been widely planted on farms throughout the plains of the subcontinent. The species grows on saline, alkaline soils, and on those with calcareous pans. Subspecies hemispherica is restricted to dry sandy streams beds near Karchi, ssp. cupressiformis has similar preferences to ssp. indica though is less resilient to weed competition.

A. nilotica occurs from sea level to over 2000 m. It withstands extremes of temperature (-1 to 50?C), but is frost tender when young. Annual rainfall varies from 250 – 1500 mm. Trees are generally deciduous during the dry season, though riverine ssp. can be almost evergreen.

Distribution
The species is naturally widespread in the drier areas of Africa, from Senegal to Egypt and down to South Africa, and in Asia from Arabia eastwards to India, Burma and Sri Lanka. It has also been cultivated elsewhere, including Australia, Cape Verde islands, Indonesia, Iran, Iraq, Nepal, Vietnam, and the West Indies.

USES.
Wood. Since the time of the Pharoahs, large timber trees have been exploited from the riverine forests of the Nile. At present the Sudan forests are managed on a 20-30 year rotation producing termite resistant timber especially suitable for railway sleepers. In India and Pakistan riverine plantations are managed on a 15-20 year rotation for fuelwood and timber.

The dark brown wood is strong, durable, nearly twice as hard as teak, very shock resistant, and is used for construction, mine props, tool handles and carts. It is best carved in a green state. It has a high calorific value of 4950 kcal/kg, making excellent fuelwood and quality charcoal. It burns slow with little smoke when dry.

Fodder. The pods and leaves contain 8% digestible protein [12.4% crude protein], 7.2 MJ/kg energy, and are rich in minerals (Le Houerou 1980). In part of its range smallstock mainly consume it, but elsewhere it is also very popular with cattle. Pods are used as a supplement to poultry rations in India. Dried pods are particularly sought out by animals on rangelands. In India branches are commonly lopped for fodder. Pods are best fed dry as a supplement, not as a green fodder.

Agroforestry. Babul (ssp. indica) is a popular farm tree of the central plains of India. More recently interest has centred on the fastigiate form (ssp. cupressiformis). This subspecies makes an ideal windbreak surrounding fields; its narrow crown shades less than other windbreak species.

Land Rehabilitation. In India this species is used extensively on degraded saline/alkaline soils, growing on soils up to pH 9, with a soluble salt content below 3%. It also grows well when irrigated with tannery effluent, and colonises waste heaps from coal mines. Over 50,000 hectares of the Indian Chambal ravines have been rehabilitated with A. nilotica by aerial seeding (it is one of the 3 most frequently used trees for this purpose).

Tannins. The bark of ssp. indica has high levels of tannin (12-20%) which are used for tanning leathers. Ten year old trees yield 35-40 kg of bark. The pods of ssp. nilotica have been used for tanning in Egypt for 6,000 years. Subspecies adstringens is used for both tanning and dye making. Deseeded pods from ssp. indica have 18-27% tannin levels, whereas ssp. tomentosa and nilotica reach up to 50%.

Other Uses. The tannin also contributes to its medicinal use as a powerful astringent. It is also a powerful molluscicide and algicide. Fruits added to ponds in Sudan kill snail species which carry schistosomiasis without affecting the fish.

There are many other reported uses (Fagg & Greaves 1990). The tree makes effective live fencing, a good host plant for growing sandalwood, and an important source shellac in the Sind. The gum is used in paints and medicines and has been collected for a millennia. It has similar properties to gum arabic (from A. senegal) and is frequently used in calico printing in India.

SILVICULTURE. Propagation. It is a pioneer species, easily regenerated from seed. The nutritious indehiscent pods have evolved for animal dispersal. A mature tree can produce 2,000-3,000 pods in a good fruiting season, each with 8-16 seeds, yielding 5,000 – 16,000 seed/kg depending on the subspecies.

Hard coated seeds can be extracted by pounding the pods or collected from animal pens after the pods have been eaten (Sheikh 1989). Pretreatment is needed. Mechanical scarification works best for small seed lots. Acid scarification from 60 – 120 minutes (depending on seed provenance or age), or pouring boiling water over the seeds and allowing them to cool are also effective.

Seed from natural populations of some subspecies are available from India and some Sahelian countries. A broader range of germplasm and Rhizobium inoculum, is available from the Oxford Forestry Institute (Oxford OX1 3RB UK) for field trials.

Management The species can be direct seeded or established by seedlings. in the nursery long poly tubes (20 x 7 cm) should be used so as not to restrict rapid tap root growth. Frequent root pruning is advised. Nursery grown seedlings are usually outplanted after 6 months, but in some cases stay in the nursery up to a year.

Establishment varies depending on the site. Seedlings are shade intolerant. In irrigated plantations in the Sind and Punjab, 10-15 seeds are spot sown at 2×3 m spacing on the tops of trenches. They are thinned to 3-4 seedlings after 3-4 months. Further thinning occurs at 5 year intervals. Rotations are 20-25 years. In the Thal desert, Pakistan (250 mm of rain), promising growth resulted from irrigation on a 10 day interval. Growth rates varied considerably depending on the sites, with maximum mean annual increment of 13 m3 /ha at 20 yrs old and 10.5 m3 /ha at 30 years recorded.

Acacia nilotica can become weedy when introduced out of its native range, particularly in more humid zones. Thorniness can be a problem when introduced to areas where people do not traditionally use thorn trees.