NFTA 92-03, June 1992
A quick guide to useful nitrogen fixing trees from around the world

Acacia saligna is a small nitrogen fixing tree native to the southwest of Western Australia. It is commonly known as golden wreath, orange wattle, or blue-leafed wattle and was formerly known as A. cyanophylla. It is fast growing and tolerant of a wide range of soils, including calcareous and slightly saline types in temperate climates. Acacia saligna is planted in North Africa and the Middle East for fodder, fuelwood, sand stabilization, and as a wind break. In Australia it is most commonly used as an ornamental, but is being increasingly planted in agroforestry systems for fodder production and soil conservation 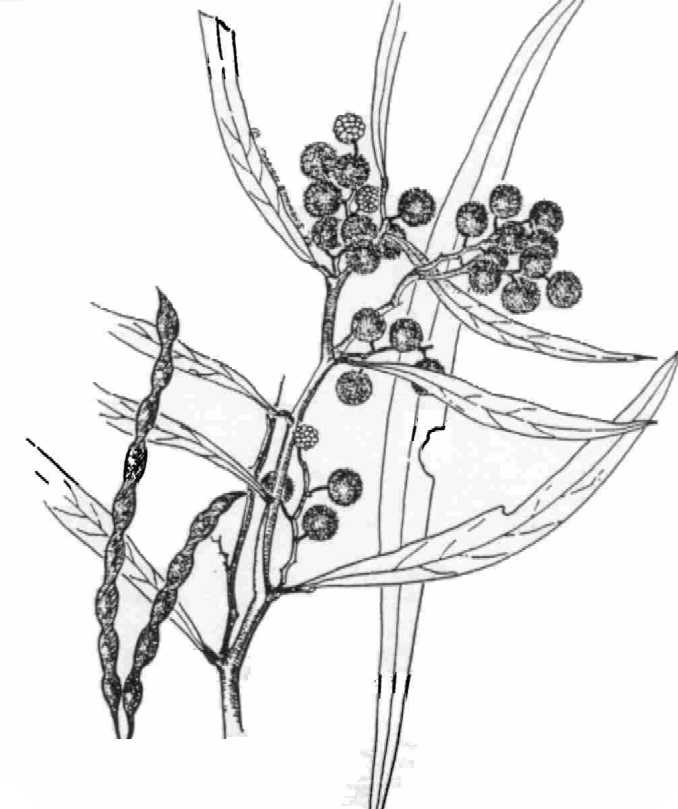 Botany:
A. saligna (Labill.) H. Wendl. is a dense and multi-stemmed, thornless, spreading shrub or single stemmed small tree up to 9 m in height. The bark is smooth and grey to red-brown on branchlets. Young plants become dark grey and fissured with age. Dark green to blue-green phyllodes with conspicuous midribs are long and narrow to lanceolate and 8-25 cm long. Flower heads are globular and contain 25-55 (up to 78) bright yellow, five-parted flowers. The pods are narrow, 4-6 mm wide and usually 8-12 cm long. The seed is 5-6 mm long x 3-3.5 mm wide, dark brown to black and shiny (Maslin 1974); there are 14,000-25,000/kg. Acacia saligna is 2n=26 and outcrossing.

Ecology
In its native range A. saligna is confined to southwest Western Australia. It has become naturalized in parts of eastern Australia from Victoria to southeast Queensland. In its natural habitat, A. saligna occurs where the mean annual rainfall is 300 to 1,000 mm. In drier areas it normally receives additional run-on water.

Mean maximum temperature of the hottest month is 23 to 36oC and mean minimum of the coldest month is 4 to 9oC. Much of the area of natural distribution is frost- free but occasional light frosts occur in inland areas (Hall and Turnbull 1976). A. saligna is sensitive to frosts and damage is likely to be severe if the temperature falls below –4oC. The tree ranges from sea level to about 325 m elevation.

Trees are common on alkaline, infertile sandy soils. In many places A. saligna is more or less restricted to creeks and rivers and disturbed roadsides. It is moderately common along the south coast of Western Australia but is best developed in the deep sands and loams along the water courses throughout the area. Further inland, in the wheatbelt, populations occur at the base of many of the large, granitic rock outcrops. On coastal dune systems it often forms dense thickets in the hollows between sand hills (Maslin 1974).

USES.
Wood: A. saligna wood is used as fuel and charcoal and for vine stakes and small agricultural implements (Michaelides 1979). It has been successfully processed into particle board in Tunisia (El-Lakany in Turnbull 1987).

Forage: The phyllodes, young shoots, pods and seeds, whether fresh or dry, are protein rich and non-toxic and palatable to both sheep and goats (Michaelides 1979). According to Woodward and Reed (1989), however, the phyllodes are not suitable for ruminants. This feed is especially valuable seasonally when other forage is scarce. The chemical composition shows the following ranges: dry matter (50-55%), crude protein (12-16%), crude fiber (20-24%), crude fat (6-9%), and ash (10- 12%) (El-Lakany in Turnbull 1987). Analysis of phyllodes from trial plantings in southeast Queensland indicate a moderately low digestibility (36.5% predicted in vivo) but high levels of crude protein (18.3%) (Vercoe in Boland 1989). The low Ca/P ratio of 4.1 should enable efficient use of phosphorus supplements.

Windbreaks: The tree is used extensively for coastal sand dune fixation in North Africa, the Middle East, and South Africa and for gully erosion control in Uruguay. In Australia it has been used in the rehabilitation of sand mining areas (Hall and Turnbull 1976).

Other Uses: Trees were planted in the past for tannin production from the bark (Hall and Turnbull 1976). The damaged bark exudes copious amounts of gum that is very acidic. Such acid-stable gum has promise for use for pickles and other acidic foodstuffs (Michaelides 1979). A. saligna is also widely planted as an ornamental.

Establishment. Prior to sowing, seed should be immersed in boiling water for 1 min to remove seed coat dormancy. Seed coats can also be scratched or nicked with a file or nail clipper. Seeds are available from NFTA. Treated seed should be planted to a depth of 0.5 cm. Seedlings can be produced either by direct seeding or in a nursery. A nursery phase of 10-12 weeks is recommended. Soil should not be allowed to dry between sowing and germination. Young plants require protection from grazing animals.

Growth. In trials in southeast Queensland, A. saligna attained an average height of 6.2 m after only 41 months (Ryan and Bell in Boland 1989). The tree is tolerant of drought, light frost, alkalinity, and salt (Simmons 1981). Successful irrigation trials (6 liters/tree every 2nd day) have been undertaken at the Desert Development Center, The American University in Cairo. A. saligna coppices well and fodder biomass production is optimized by regular, annual harvesting (El-Lakany in Turnbull 1987). Trees grow poorly in tropical areas, except at high altitudes. In such areas the species A. ampliceps, a valuable alkaline soil fodder tree, may prove a more acceptable alternative. 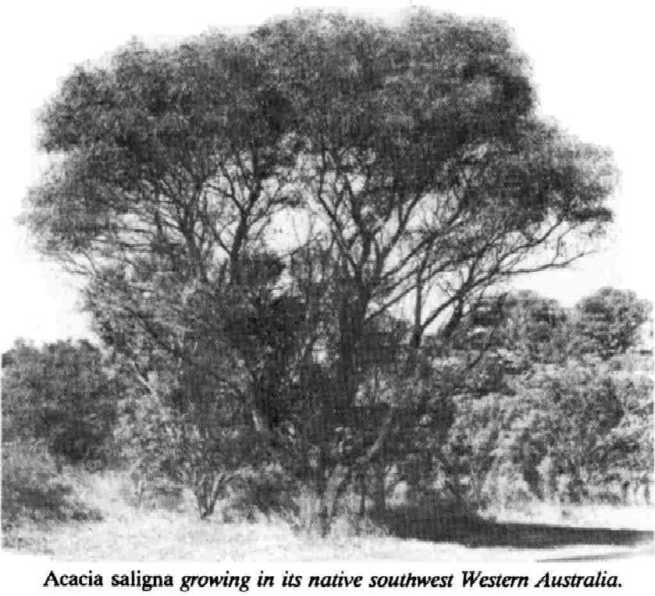 Symbioses. The tree modulates with certain strains of Rhizobium (Roughley in Tumbull 1987). In common with many other acacias, it forms associations with VA mycorrhizal fungi (Reddell and Warren in Turnbull 1987).

Weediness. Caution is advised using A. saligna. The tree has become a major weed in South Africa by invading and displacing the indigenous vegetation (Roux and Middlemiss 1963). The species was introduced to South Africa in the first half of the nineteenth century. It has spread to waterways and irrigation channels. The seed has also spread in river sand transported for road and dam construction. Its hardiness and ability to coppice rapidly after fires or from trunks has also led to widespread establishment (Stirton 1980).

Roux, E.R. and E. Middlemiss. 1963. Studies in the autecology of Australian acacias in South Africa. The occurrence and distribution of Acacia cyanophylla and, A. cyclops in the Cape Province. South Africa J. Science 59:286-294.