NFTA 91-02, April 1991
A quick guide to useful nitrogen fixing trees from around the world 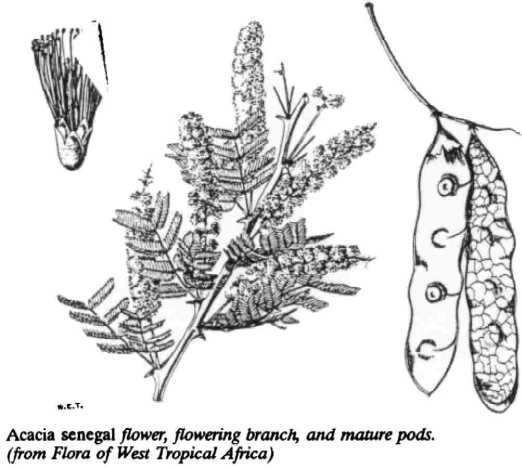 Botany
A deciduous shrub or shrub tree, Acacia senegal (L.) Willd. grows to 2-6 m (occasionally to 15 m) tall with a flat to rounded crown. The tree has many branches and erect twigs spreading within the upright part. The bark is typically yellow/brown and smooth on younger trees, changing to dark grey, gnarled and cracked on older trees. The branchlets have thorns just below the nodes: either three thorns with the central one hooked downwards and laterals curved upwards, or a single thorn with laterals absent. Leaves are small, grey-green, alternate, and bipinnate. Pinnae occur in (2-)3-8(-12) pairs, and leaflets in 7-25 pairs. The rachis sometimes have prickles. The white or cream colored flowers occur on 2-12 cm long spikes. Pods are dehiscent (open by splitting at maturity), yellowish to brown, flat papery, and oblong (2-19 cm long by 1-3.4 cm wide). Seeds are nearly round to flat olive brown, and 8-12 mm in diameter. The tree flowers during the rainy season.

Varietal differences in Acacia senegal are based on variation in natural distribution as well as differences in morphological characteristics such as: presence or absence of hair on the axis of the flower spike, color of the axis, shape of pod tips, number of pinnae pairs, occurrence of a distinct trunk, and shape of the crown. Four different varieties of Acacia senegal are recognized: var. senegal, var. kerensis Schweinf., var. rostrata Brenan, and var. leiorhachis Brenan.

ECOLOGY. Acacia senegal is very drought resistant. It grows on sites with annual rainfall between 100-950 mm, mainly between 300-400 mm, and 5-11 month dry periods. It tolerates high daily temperatures (mean maximum temperatures of up to 45oC or more), dry wind, and sandstorms. Generally it cannot withstand frost. Acacia senegal prefers coarse-textured soils such as fossil dunes, but it will also grow on slightly loamy sands and skeletal soils such as Lithosols. Although generally soils are well- drained, there are exceptions: in the Kayers region, South- Kordofan, East Sudan, A. senegal grows on heavy clay soils with approximately 800 mm annual precipitation. The best sites have pH of 5 to 8. The tree ranges from 100-1700 m elevation in the Sudan to 1950 m around Nakuru in Kenya.

USES.
Gum: Acacia senegal and its close relatives are the defined source of commercial gum arabic for food purposes. A. senegal produces the only acacia gum evaluated toxicologically as a safe food additive (Anderson 1989). The gum from other Acacia species (A. seyal etc.) is available commercially as gum tahla (approx. 10% of au acacia gum marketed) for technological applications. Gum arabic has been used for at least 4,000 years by local people for preparation in food, in human and veterinary medicine, in crafts, and as a cosmetic. Today, gum arabic’s applications are manifold. Formerly the international trade market largely absorbed all gum available, though recently international demand has declined together with gum prices.

Gum arabic is used in the food industry as a flavor fixative and emulsifier, to prevent crystallization f sugar in confections, as a stabilizer in frozen dairy products, for its viscosity and adhesive properties in bakery products, and as a foam stabilizer and clouding agent in beer. In pharmaceutics, it is used as a stabilizer for emulsions, binder and coating for tablets, and as an ingredient in cough drops and syrups. A soothing and softening agent, gum arabic is extensively employed in folk medicines. Among many other uses, it is used internally for coughs, diarrhea, dysentery, hemorrhage, and externally to cover inflammed areas. Gum arabic is used in cosmetics as an adhesive for facial masks and powders, and to give a smooth feel to lotions. Industrially, gum arabic is applied as an adhesive, as a protective colloid and safeguarding agent for inks, sensitizer for lithographic plates, coating for special papers, sizing agent for cloth to give body to certain fabrics, and coating to prevent metal corrosion. Gum arabic is also used in the manufacture of matches and ceramic pottery.

Wood:
Acacia senegal wood is locally valued for fuelwood and charcoal although biomass yield per unit land area is not sufficient to plant A. senegal purely for fuelwood. Wood is used in local construction for poles and fenceposts, the light-colored wood for tool handles and dark heartwood for weaver’s shuttles. Strong ropes are made from the bark fibers of the tree’s long surface roots.

Agroforestry:
Acacia senegal is grown in agroforestry systems especially in the Sudan in “gum gardens’ for gum as well as to restore soil fertility. Five-year-old trees are ready for tapping, and production peaks between 7 and 15 years. In Sudan, a traditional bush-fallow system is followed with a 20-year rotation during which time Acacia senegal is grown for 15 years. Agricultural crops are grown for five years (miuet, sesame, sorghum, groundnuts), followed by five years with young, unproductive A. senegal trees, which later produce gum during the last 10 years of the rotation. Corresponding to this rotation, 1/4 of the land is kept in agricultural crops, 1/4 in young unproductive trees, and 1/2 in productive trees. Controlled grazing is practiced after the trees have reached age four and under productive trees after the gum has been harvested. Wild trees are harvested during the dry season for gum exuded from cracks in the bark.

PROPAGATION. Seed should be harvested before pods have dried for easy collection and to avoid insect attack. Seed is easily extracted by hand. Freshly extracted seed should immediately be dusted with an insecticide. Seed will remain viable for 3-4 years if kept in opaque, airtight containers. There are 10,000-30,000 seeds/kg. Fresh seed requires no pretreatment if sown immediately after harvest. Seed collected in previous seasons, however, requires pretreatment to break seed dormancy. Soaking seed in water for 12-24 hours gives good results and is simple to apply. Seeds can also be nicked.

A. senegal is usually raised in the nursery in polyethylene pots, 2-4 seeds per pot, thinned to one seedling after 4-6 weeks. Direct seeding (5-8 seeds in 30 x 30 x 30 cm pits or larger) can also be used. Strict protection from fire and livestock grazing, and efficient control of weed competition during at least the first two years is important to seedling survival. Minimum spacing for block planting is 4 x 4 m. At 10 x 10 m spacing, agricultural intercropping is possible, for example, interplanting with millet, beans, or groundnuts.

FAO and UNEP. 1983. Notes on trees and shrubs in and and semi-arid regions. EMASAR Phase 11. FAO, Rome, Italy.