NFTA 94-07, September 1994
A quick guide to useful nitrogen fixing trees from around the world

One of few strongly gregarious sahelian tree species, Acacia seyal combines tolerance of periodically inundated heavy clays with major roles in fuel and fodder production in countries at the southern edge of the Sahara desert, especially Mali, Chad and Sudan. A gum (gum talha) is collected from the tree and a proportion enters international trade. The epithet seyal derives from an Arabic word for “torrent” used for the species in Egypt and denotes association with water courses. 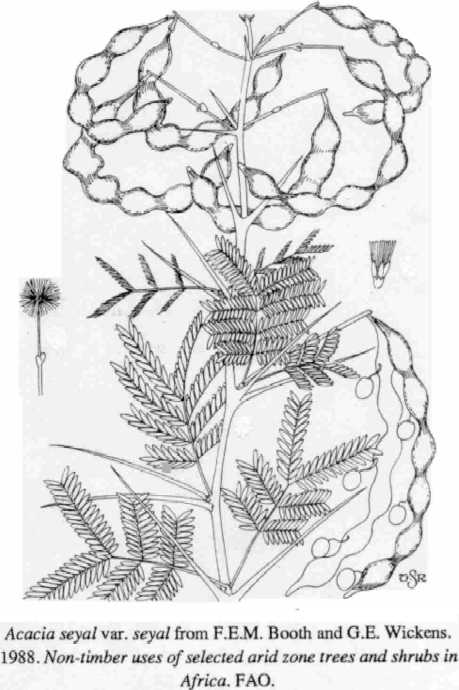 Botany
Acacia seyal Delile (family Leguminosae, subfamily Mimosoideae) is one of over 60 African acacias referred to die Uniseriae group of subgenus Acacia. The species usually reaches 9-10 m in height at maturity and in well-formed individuals a flat-topped crown develops. There are two varieties, differing primarily in whether or not pseudo-galls (“ant galls”) develop and in bark color. In var. seyal there are no pseudo-galls and a reddish bark color prevails, although periodic bark exfoliation exposes a pale powdery surface which darkens slowly. In var. fistula pseudo-galls are present and the powdery bark typically remains whitish or greenish-yellow. Both varieties have paired, straight, strong, pale-colored, stipular spines up to 8 cm long which in var. fistula are often fused at the base into the inflated pseudo-gall. The leaves are bipinnate – usually with 4-8 pairs of pinnae, each of which bears 10-20 pairs of close-set, obscurely veined leaflets. Individual leaflets are 1-15. mm wide and about 5-8 mm long. Small bundles of up to 5 pedunculate capitate inflorescences arise in axillary positions on the young parts of shoots. Each inflorescences is vivid yellow in color, about 15 mm in diameter, and is borne on a peduncle 34 mm long. The dehiscent pods are flat and somewhat curved, brown and up to about 20 cm long and 5-10 mm wide when ripe, with slight constrictions between the seeds. In a well-developed pod 6-10 seeds are present, each 6-9 mm long, 4-5 mm wide and about 2 mm thick – in 1 kg there are 20,000-25,000 seeds. The chromosome number of 2n = 52 suggests tetraploidy.

Distribution
The range of A. seyal extends from Senegal eastwards to western Somalia and the coastal lowlands east of the Red Sea, and from the Nile valley of southern Egypt to southern Zambia. The two varieties differ markedly in their ranges – var. seyal extends westwards from central Sudan and north of latitude 18oN and var. fistula extends south of latitude 10oS. The ranges overlap mainly in the upper Nile catchment, the Lake Victoria basin and the Ethiopian and East African rift valleys. Occurrence beyond the natural range is limited to arboreta (e.g. Iraq, Portugal) and experimental studies (e.g. India).

Ecology
Given suitable climatic and edaphic conditions closed, and essentially pure, stands of A. seyal develop but admit sufficient light for grass to grow in the understory. Through the greater part of the range of A. seyal mean annual rainfall is 500-1200 mm and there is a well-defined 6-8 month dry season with mean annual rainfall less than 50 mm. Occurrences in more arid climates are associated with presence of water in addition to direct rainfall. The phenological cycle relates closely to the rainfall regime. Where there is a well defined unimodal rainfall pattern, leaf fall takes place by the middle of the dry period and trees remain leafless for 4-7 months, depending on when the subsequent wet season begins. Leafless periods are briefer in bimodal equatorial rainfall regimes. Flowering is concentrated in the middle of the dry season and ripe fruits are present about 4 months later.

Temperature regimes vary through the range, particularly for var. seyal which is subject to mean annual temperatures of 18-25oC. Var. fistula occurs mostly where mean annual temperatures are 20-25oC, but also in cooler climates in Ethiopia, at the upper elevation limit (1700-2000 m). Relationships with extreme temperatures follow a similar pattern – in parts of West Africa where var. seyal is present, absolute temperature maxirna are 50-55oC. Absolute minima through the range of the species are generally 5-10oC but below 5oC at the northern limit and at altitudes >1800 m. The distribution pattern overall is indicative of a frost-sensitive species.

Relationships with soil are well-defined. There is an unusual degree of adaptation for deep, heavy soils (pH 6-8) accumulated at low points in a landscape or formed directly from fine-grained rocks, such as shales, and readily weathered volcanic materials. In communities containing both varieties, var. fistula displays greater tolerance of waterlogging and occupies lower positions in depressions and along drainage lines. Saline soils are not suitable.

Uses
Fuel. Var. seyal, especially, is an important source of rural energy as both fuelwood and charcoal. Stands managed on a 10-15 year rotation yield 10-35 m3 ha-1 of fuelwood.

Fodder. Both varieties of A. seyal are viewed favorable as forage. Dry matter net energy contents are high: 6-8 MJ kg-1 (foliage) and 4-7 MJ kg-1 (fruits). The associated digestible protein levels are also high: 100-150 g kg-1 in the foliage, and higher in the fruits. For both foliage and fruits, analyses indicate a well balanced supply of minerals and very favorable qualities in terms of proximate fractions (e.g. crude fiber 10-20%-, ether extract <7%). The foliage of var. seyal has been shown to contain secondary metabolites but experience suggests that levels are not a matter of serious concern.

Gum talha. Gum talha has not been toxicologically evaluated and is not listed as an approved food additive. It contrasts with gum arabic in several significant respects, being strongly dexatorotatory, of high molecular weight and low in nitrogen (0.06-0.24%) and rhamnose (<4% sugar composition). Ash contents of cobalt, copper, iron, nickel and, especially, aluminum (>6000 ppm) are high and tannin is present (2%), restricting acceptable use to such applications as a binder for foundry molding and a sizing agent in the texile industry.

Management of natural stands
Both varieties of A. seyal are noteworthy for occurrence in the undisturbed state in seral, even-aged stands. Reconstitution of an exploited var. seyal stand depends not on coppice shoots but on the presence of abundant seed and its exposure to a mild fire which enhances the germination of var. seyal but checks the regeneration of competing species. Stands 15 years old when harvested are likely to have produced a seed reserve sufficient to regenerate the stand. However, individual trees or uncut patches of the original cover should be left as seed sources to insure abundant regeneration. Where management for fodder production is concerned, evaluation of responses to lopping and cutting of var. seyal indicate limited recovery capacity in mature trees. Beating branches to detach leaves and fruits without damage to axillary buds is therefore preferred to exploit these as dry season resources.

Propagation
Unopened, full-sized fruits are gathered off the trees and allowed to release seed. After cleaning, seed stores well in cool, dry conditions, remaining viable for up to 8 years. Pretreatment in the nursery is advantageous, although not essential, to accelerate the germination rate. Scarification and acid treatments have proved favorable. However, germination rates have rarely exceeded 30% in 7 days. Seeds can be pregerminated in contact with moist cotton wool or filter paper to allow rapid identification of viable non-dormant seed. Transfer to containers filled with a silt-rich medium. Seedlings require shade until the second leaf expands and watering at intervals of 1-3 days as necessary to keep the medium moist but not waterlogged.

Formal stands
Stands of var. seyal have been established in Sudan, often by direct sowing of pretreated seeds to prepared planting spots. Sowing seed in batches ensures a high proportion of spots become occupied. Competition from weed growth is overcome by using taungya, with mechanized site preparation and sowing. Sesamuum or Sorghum is intercropped among widely spaced
(ca 4 m) rows of trees. For poles and fuelwood a 20 year rotation is projected. Initial stocking is 1000 stems ha-1. Thinnings after 10 and 14 years reduce stocking to 675 and 450 stems ha -1, respectively.

Nodulation
Nodulation occurs in natural populations. In artificial regeneration it has been achieved by pelleting seed with culture of bacterial isolates, sowing into an infected medium or germinating in unsterilized soil. Uninfected seedlings have been inoculated successfully by treatment with a suspension of a symbiont. Rhizobium strains from A. mellifera and A. senegal and Bradyrhizobium from the latter have proved to be, effective symbionts.

Pests
Over 40 species of insects are reported associated with A. seyal. These include 10 species of bruchid beetles which may damage high proportion of stored seeds. Beetles of various other families attack the wood, the bostrychid Sinoxylon senegalense being the most notorious and swiftly locating and infesting freshly cut wood, especially if lying on the ground. Attacks am much reduced if the bark is removed and the cut stems stacked upright. Subsequent creosote treatment ensures extended durability.

Adams, M.E. 1967. A study of the ecology of Acacia mellifera, A. seyal and Balanites aegyptiaca in relation to land clearing. Journal of Applied Ecology, 4: 221-237.