Acacias for the Hot Dry Subtropics

NFTA 89-02, May 1989
A quick guide to useful nitrogen fixing trees from around the world

Of Australia’s tropical area, almost 2 million km2 receives less than 500 mm of rainfall annually. Soils are diverse, but typically low in plant nutrients, with widespread and severe deficiencies in phosphorus and nitrogen and some deficiencies in trace elements. Surface soils are physically poor, and in places may be alkaline/sodic or saline (Brown and Turnbull 1986). Summers are extremely hot and elevated inland areas (e.g. the Pilbara region of northwestern Australia) may receive winter frosts.

The dominant woody vegetation of this zone, 120 or so species of Acacia, have evolved adaptations such as symbioses with Rhizobium and mycorrhizas, to cope with nutritional deficiencies and other stresses. These species constitute a unique, potential resource for rehabilitating degraded lands in the dry tropics. A few species have already shown exciting potential in the Sahelian zone of West Africa, but many more species remain untested. 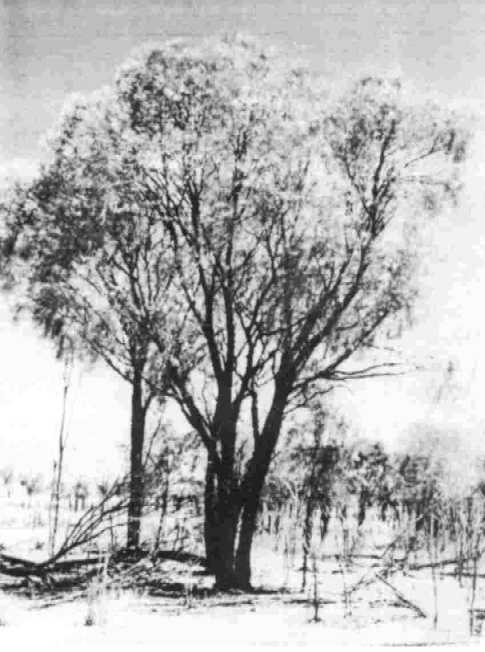 Acacia maconochieana is a highly salt and waterlogging tolerant tree from northwestern Australia.

FUELWOOD: Acacia holosericea has received fairly widespread attention in trials and plantings, and to a lesser extent, so have A. brachystachya and A. cambagei (NAS 1979, Turnbull 1988). Many other species are in the early stages of evaluation.

For firewood production on short rotations, Fox (1987) recommends trying A. murrayana, A. tumida, and A. cowleana; as well as A. pruinocarpa; A. xiphophylla and A. aneura for harsher, drier environments. A. aneura grew into a healthy, multi-stemmed tree 3 in height with a 2-4 cm DBH and a 1 m crown radius on a site receiving 370 min of rain/yr. and little supplementary water (Kube 1987). It can grow 1 m/yr. with supplementary irrigation.

A. tumida (Fitzroy Crossing provenance) has shown the fastest growth in recent acacia trials in Niger, reaching 2.4 m after 14 months, compared to 1.9 rn for A. holosericea and A. cowleana. In trials in several West African countries with dry seasons of 5-8 months, A. tumida has exhibited erratic survival, but trees have grown 3 to 4 in in 4 years (CTFT 1983). The results are considered promising enough to merit further trials. A. tumida demonstrates wide morphological variation, as well as variation in economically important traits such as coppicing ability, and may constitute more than one taxa as currently circumscribed.

For sandy soils, species that show promise (rapid growth, moderately long life spans and good coppicing/pollarding ability) are A. ampliceps, A. anaticeps, A. coriacea, A. eriopoda, A. jennerae, and A. salicina (Thomson, et al. 1988). Specimens of A. ampliceps have grown over 2 in in one year in Western Australia (Turnbull 1986). A. coriacea has reached 3 to 3.6 in in 7 years and withstood extreme drought periods in Senegal (CTFT 1983). A riverine form of this species from the Pilbara area has proven particularly fast growing in plantings in northwestern Australia. Early growth data from Iran indicated that A. salicina can have a mean annual height increment of 1 m/yr. (Webb 1973).

For areas receiving some run-on water and with heavy textured soils, A. citrinoviridis, A. difficilis, A. distans, A. hemignosta, A. maconochieana, A. pachycarpa, A. stenophylla, A. trachycarpa, and A. victoriae are promising (Thomson, et al. 1988).

FODDER POTENTLAL: Stock generally prefer grass and soft herbage to the relatively harsh phyllodes of and zone acacias (Fox 1987). During dry seasons, however, when other plant material is scarce, cattle and sheep will heavily browse certain more palatable species. A. aneura commonly called Mulga, is lopped to provide animal feed during drought periods. Biomass studies at Jodhpur, India, indicated that 7-year-old Mulga trees yielded 30 kg of fuelwood and 10 kg fodder when 75% of the canopy was pruned. International mulga trials coordinated by FAO/CSIRO are in progress to identify superior provenances (Midgley and Gunn 1985). Some early trial data suggest more rapid growth by provenances from the Charieville District of central Queensland. Despite its low to moderate digestibility (36-52%), it has a high crude protein content (11-16%), a low phosphorus content (0.05-0.12%) and good palatability, which increases with age (Turnbull 1986). In many parts of Australia, mulga is a significant part of a sheep’s diet at all times of the year, but, without supplementary feed, it supplies barely sufficient protein and energy to provide a maintenance ration for sheep (Niven 1983).

A. trachycarpa was unknown as a fodder in Australia, but in West Africa the species has been readily browsed by cows, sheep, and goats (Cossafter 1987). A trial in Senegal planted at 3 in x 3 in produced 2.03 t/ha of foliage at 1-5 years (Hamel 1980). Close relatives of this species, such as A. chisholmii, and A. lysiphloia, grow rapidly on degraded, infertile, lateritic and sandy sites, but their fodder value is unknown.

Vercoe (1987) recommends that A. shirleyi, A. bidwillii, and A. saticina (with in vivo digestibilities > 50%) and A. stenophylla (digestibility < 50%) be further studied for their fodder potential. Turnbull (1986) indicates that A. ampliceps , A. bidwillii (immature foliage), A. pachycarpa, and A. victoriae appear to have some fodder value for cattle and sheep, and A. salicina and A. stenophylla are grazed by sheep.

A. tumida, which is moderately palatable to stock in West Africa, yielded an average of 2.6 kg of dry phyllodes/tree and 8.7 kg of wood/tree when planted at 3 x 3 in and harvested after 18 to 23 months (Cossafter 1987).

SALINE/ALKALINE SITES: A. ampliceps, called the salt wattle, is a very fast growing shrub/small tree from northwestern Australia that has considerable promise for fodder plantings on alkaline/saline soils, especially where its roots have access to a shallow brackish water table. Other highly promising multipurpose small trees for saline soils include A. ligulata, A. maconochiena, A. salicina, A. sclerosperma, A. stenophylla, and A. victoriae (Thomson 1987, Aswathappa, et al. 1987). 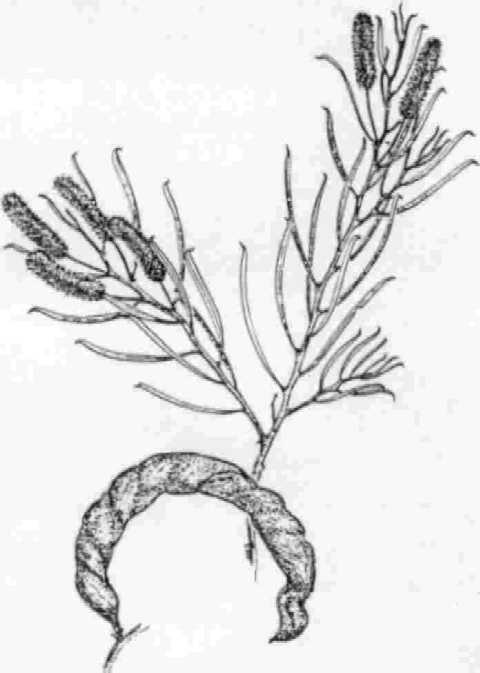 Acacia trachycarpa is well adapted to coastal areas with annual rainfall
greater than 500 mm, or in areas that receive runnoff water. Drawing from
Acacias in Australia by M. Simmons, Thomson Nelson Australia 1982.

FOOD VALUE: Seeds of many Australian Acacia species, including A. ampliceps, A. anaticeps, A. aneura, A. coriacea, A. cowleana, A. dictyophleba, A. holosericea, A. jennerae, A. murrayana, A. stipuligera, A. tumida, and A. victoriae are traditional foods of Australian abor- igines (O’Connell et al. 1983). These highly nutritious seeds are readily harvested (Brand and Cherikoff 19a5) and can be stored for many years. Certain precocious and prolific seeding species, such as A. holosericea and A. tumida can yield in excess of 100 kg of seed per ha from degraded and infertile sites within 2-3 years of planting. These species may have potential for food production on difficult sites in developing countries.

OTHER USES: Many of the Australian acacia species, particularly ones adapted to the driest environments, may prove most useful in stabilizing sand dunes. Firewood and other products could be secondary benefits. A. ampliceps and its close relatives (A. bivenosa, A. ligulata, and A. sclerosperma) have excelled in sand-dune stabilization plantings in Australia, Africa, the Middle East and India. A. stenophylla, of temperate Australian origin, has been extensively planted in dry parts of Tunisia for sand stabilization, honey production, and fodder/fuelwood production, but seed of sub-tropical provenances has become available only in recent years (Thomson and Cole 1987). Some species such as A.coriacea var. pendula A. cyperophylla (pendulous variant from Nullagine), A. grasbyi, A. hamersleyensis (pendulous variant from Tom Price), A. orthocarpa, A. sibilans, A. stipuligera, and A. wanyu have superior potential as ornamentals. Others, such as A. cambagei and A. pachycarpa have offensive odors. Although competition for water and slow growth have made alley farming in and and semi-arid areas less successful than in humid regions, some of the more rapidly growing Australian acacias with a moderately long life spans, good coppicing/pollarding ability, and useful fodder/green manure, may be useful for this purpose (Thomson, et al. 1988).

PROBLEMS AND LIMITATIONS. Heavy seeding, root suckering or a tendency to form thickets make some of these species potential weedy pests. Turnbull (1986) indicates A. bidwillii, A. cowleana, A. ligulata, A. murrayana, A. salicina, and A. victoriae, in particular, are potentially weedy. Since many species occupy wide geographic and environmental ranges, or may comprise several taxa, provenance testing and special attention to seed source are advised.

SEED SUPPLY. The Australian Tree Seed Centre of CSIRO’s Division of Forestry and Forest Products stocks seed of many of the above mentioned species and will provide a quotation on request.
Its address is:

Hamel, 0. 1980. Acclimatization and utilization of phyllodinous acacias from Australia in Senegal. IN: Browse in Africa – the current state of knowledge, pp. 361-373. ILCA, Addis Ababa, Ethiopia.

Thomson, L.A.J., J.W. Turnbull, and B.R. Maslin. 1988. Characteristics and potential uses of Acacia from the subtropical dry zone of Australia. Paper in preparation.

Webb, D.B. 1973. The introduction and trial of exotic tree species in the semi-arid zone of Iran. Unpublished.