A class of plants that helped develop soil on glaciated sites in the past has a future in agroforestry and land reclamation projects of today and tomorrow. These plants are known as actinorhizae, as they are nodulated by the nitrogen-fixing actinomycete, Frankia These predominately temperate trees are especially useful in areas where the mostly tropical woody legumes can not live or thrive.

Actinorhizal plants have been used historically to increase fertility in agricultural systems. Lack of knowledge about the group’s ecology prevents more widespread user but the trees are currently used in the following four ways: 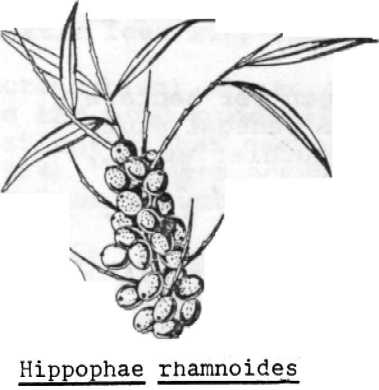 Environmental protection and land reclamation are benefits provided by several actinorhizal species. Elaeagnus, Purshia and Shepherdia spp. are widely planted in North America to prevent soil erosion (Fessenden, 1979). Hippophae rhamnoides is used for this same purpose in western and northern Europe. Casuarina species are planted in shelterbelts along deserts and coastlines in western Africa, India, China and other Asian countries to stop encroachment of sand dunes, diminish winds and decrease downwind deposition of salt spray (Andeke-Lengui & Dommergues, 1981; Turnbull, 1981). A shelterbelt built mainly with casuarina in southern China forms a “green wall” ranging from 0.5 to 5 km wide for 3000 km along the South China Sea.

The greatest use of any one actinorhizal genus is probably the production of Casuarina for firewood in the tropics. Large plantations are maintained on 5 to 15 year rotations (Kondas, 1981). Agricultural crops often are interplanted with casuarina during the first few years of the rotation. Harvested trees can be sold as firewood or converted into charcoal.

Planting Alnus, or alders, for lumber, pulp or fuelwood production is the second most common use of actinorhizal trees. Wood harvested from native stands is sold as fuelwood (Smith, 1978) or pulped and combined with softwood pulp for paper production (Hrutfiord, 1978). Mean annual wood yields for 8 to 10-year-old red alder, Alnus rubra, were nine oven-dry tons/ha/yr in British Columbia, and maximum production was 28 oven-dry t/ha/yr (Smith, 1978). Natural regeneration of alnus stands is excellent. Alnus acuminata and A. nepalensis are tropical highland species.

Other actinorhizal species are used as nurse crops for other trees. In the United States, Elaeagnus umbellata has been shown to greatly increase the productivity and quality of Juglans nigra, a hardwood species used extensively in furniture production (Schlesinger and Williams 1984). Elaeagnus apparently increased soil fertility, moderated temperatures and/or provided beneficial competition, which led to self-pruning of the tree crop. Alder has been shown to improve the growth of Populus, Pinus, and Pseudotsuga in mixed stands (Silvester, 1977).

Various casuarina species are planted from the tropics to temperate zones as windbreaks, to control soil erosion, as ornamentals, for particle board, and as a fallow -improvement crop in Papua New Guinea.

Alder foilage, twigs and sawdust have been successfully used as a cattle feed supplement (DeBell and Harrington, 1979).

Actinorhizal plants can contribute as much nitrogen per hectare as the most productive legumes (Torrey, 1978). A Senegal study estimated that casuarina fixed 288 kg/N/ha/yr (Gauthier et al., 1984). Alders accumulate between 40 to 200 kg/N/ha/yr, with maximum accumulations of up to 320 kg/ha/yr (Silvester, 1977).

Frankia is present in adequate amounts in most ecosystems for natural nodulation to occur. Inoculation might be necessary in disturbed soil, arid environments or sites where actinorhizal plants are not native. Pure cultures for many of the most important actinorhizal species are now available.

Abstracts have been made by author Dwight Baker from documents or observations by the authors cited.