NFTA 88-03, August 1988
A quick guide to useful nitrogen fixing trees from around the world

Providing high quality fodder during dry seasons is one of the most serious problems faced by many small-scale farmers in developing countries. Albizia lebbeck is particularly promising as a fodder tree for semi-arid regions in the tropics and subtropics, and it has many other uses as well. 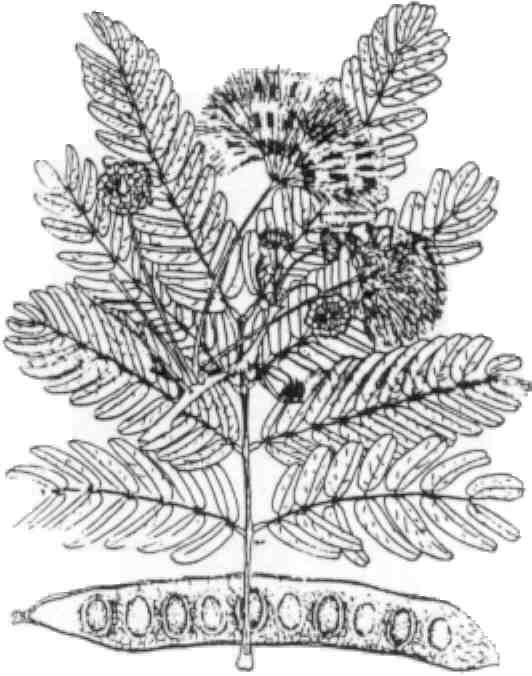 BOTANY
A. lebbeck (L.) Benth. is a moderate to large deciduous tree that reaches 30 m in height in rain forests. The tree develops a straight bole when grown in dense forests, but is spreading and low branching in the open. Unless coppiced frequently, trees will annually produce an abundance of seed from papery pods about 20 cm long and 3 cm wide (author). Common names such as “woman’s tongue” and “rattle pod” derive from the noise of pods shaking in the wind. Foliage is pale green when young and gray-green at maturity, and consists of 2-4 pairs of pinnae 50-100 mm long with 3-11 pairs of leaflets up to 50 mm long. Flowers are cream colored, hemispheric pompons.

ECOLOGY: The species is native to India, Burma and the Andaman Island , and naturalized in many other tropical and subtropical areas (Streets 1962). In these regions A. lebbeck, also known as “Siris” or “Indian Siris”, grows in a wide range of climates, covering an annual rainfall range of 600 – 2500 mm. However, it also has been grown successfully in areas with an annual rainfall as low as 400 mm. It grows in Himalayan valleys up to 1600 in. The species is adapted to a wide range of soil types, from acid soils to alkaline and saline conditions (Prinsen 1986). Older trees withstand grass fires and night frosts of considerable intensity. Such stresses kill off above-ground growth of young trees, but new growth usually follows.

FODDER: Most livestock readily eat leaves and young twigs of this fine fodder tree. Crude protein concentration is about 20% for green leaves, 13% for leaf litter, and 10% for twigs. Edible material has no known toxic compounds. In general, the digestibility of edible material from leguminous fodder trees is lower than that of leguminous herbs. In this regard, A. lebbeck is average. In vitro digestibility ranges from 45% for mature leaf to 70% for young leaf. In vitro digestibility of twigs is around 40%, considerably higher than for twigs of most other fodder trees.

Studies in Townsville, Australia, (lat. 19° S, annual rainfall c. 900 mm) have shown that trees do not have to be browsed directly, as leaves, flowers and pods fall sequentially during the dry season (Lowry, unpublished). Pradhan and Dayal (1981) measured an annual leaf litter yield of 5000 kg/ha from Indian Siris compared to 1800 kg/ha from a Eucalyptus hybrid and 8000 kg/ha from Acacia arabica.

TREES IN PASTURES: There is evidence that pasture herbage production is increased by low densities of A. lebbeck. Yields of Panicum maximum and speargrass under a canopy of A. lebbeck in a subhumid area of northern Australia were significantly higher than yields between the trees, 1710 vs. 753 kg/ha, for trees sufficiently isolated for considerable lateral light penetration (Lowry et al. 1988). Maintenance of moisture content appeared at least partly responsible for the difference. Increased grass growth was observed under a number of other tree species, but the difference was not as conspicuous and consistent as with A. lebbeck, suggesting the major factor was the right degree of shading. In a lower rainfall region, however, a much greener color of grasses under the A. lebbeck canopy suggested that increased yields were the result of increased levels of available nitrogen (Prinsen, unpublished).

YIELDS: A. lebbeck can be grown as a single-stemmed tree or as a multi-stemmed shrub. In the latter form it coppices as readily as Leucaena leucocephala. In a stand of naturalized A. lebbeck growing in shallow soil in a subtropical 750 mm rainfall area in Australia, estimates of average annual production of dry edible matter varied in different management systems. Stands of mature trees completely pruned back to the stem once every three years produced 1700 kg/ha/yr. Stands in hedgerows at a row distance of 3 m and defoliated by cattle twice a year produced 2500 kg/ha/yr. This production estimate compares favorably with a leucaena yield of 1500 kg/ha/yr in the same region, which indicates that A. lebbeck could serve as an alternative to leucaena in the lower rainfall tropics and subtropics. Although the digestibility of leucaena leaf is higher, A. lebbeck is less frost susceptible and better suited to acid soil. 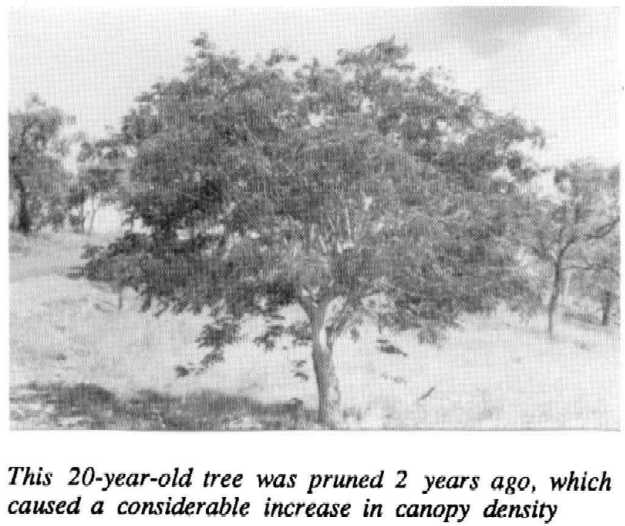 WOOD: Heartwood is brown to dark, and sapwood is white and large. Timber, with a specific gravity of 0.55 – 0.60, is very suitable for construction, furniture and veneer. Pulp is short-fibered and used for paper production only when mixed with long-fibred pulp (Anonymous 1970). Wood provides good fuel and has a caloric value of 22 kilojoules per kg (Anonymous 1970). In India, annual wood yields of 5 m3/ha were recorded in rotations of 10 – 15 years, but yields depend on environmental conditions.

NODULATION: A. lebbeck is not Rhizobium specific, and native strains are nearly always capable of producing an abundance of nodules.

PESTS AND DISEASES: This species has had no known serious pests or diseases, although a psyllid, probably of the genus Heteropsylla, recently was reported as seriously affecting seedlings in India (Hegde and Relwani 1988). The infestation could not be controlled with three sprayings of 0.2% Malathion, but was controlled by two sprayings of Nuvacron (0.05%) one week apart. Some records exist of termites damaging seedlings and fungal diseases attacking leaves in India. In Australia borers may kill off a few branches. However, no cases of significant yield losses have been reported.

ESTABLISHMENT: Seeds germinate well without scarification, but germination may be improved by immersing seed in boiling water for 3 seconds and then allowing it to cool and dry. Direct sowing is possible, but rows must be well-weeded for a few years. Another method is to raise seedlings in nursery beds for one year or more and then transplant them as stumps with about 25 cm root and 10 cm shoot (Anonymous 1970). This would considerably reduce the field establishment period.

OTHER USES: The tree is used as a folk remedy for many ailments. Another common use is as an avenue tree, and sometimes it is used to shade coffee and tea. Saponins and tannins in the bark can be used for making soap and in tanning, respectively. Bee keepers like the species for the light-colored honey its nectar provides, and the tree hosts the lac insect. Soil-binding ability makes it useful for soil conservation plantings (Sommen 1981).