NFTA 94-03, April 1994
A quick guide to useful nitrogen fixing trees from around the world

Alnus acuminata is a fast-growing species valued for its wood, watershed protection and soil improvement. Native from Mexico to Northern Argentina, it is known as: aliso (Mexico, Argentina, Colombia, Ecuador and Peru); aile, ilite (Mexico); ramrám, lambdn (Guatemala, Costa Rica and Peru); jaúl (Costa Rica); palo de lama (Guatemala) and; cerezo and chaquiro (Colombia). Easily propagated from seed or by natural regeneration, A.acuminata is a popular agroforestry species in its native range. It has been successfully introduced into southern Chile and southern New Zealand. 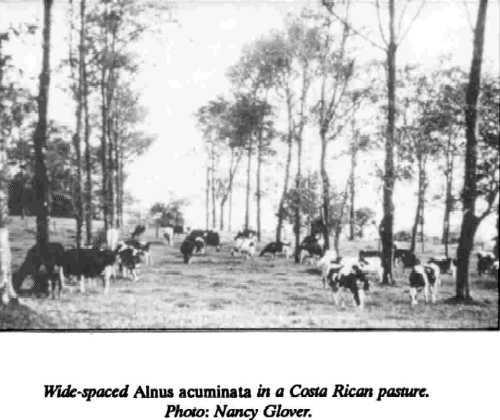 Botany
Alnus acuminata ssp. arguta (Schlectendal) Furlow (Betufaceae) grows to 30 m in height and to 50 cm in diameter (after 30 years) in natural conditions. Maximum age may be 60 years (L Fournier, personal communication). The leaves are simple, alternate, elliptical, 6 to 15 cm long, 3 to 8 cm wide, border double dentate, deciduous or semideciduos. The upper leaf surface is dark green and the lower surface is pale, whitish to light green. The bark is light-grey or silvery with yellowish lenticels. Crown shape is open rounded to pyramidal. Male and female flowers occur in separate catkins on the same branch. Inflorescences are cone-like with lignified scales, dark brown when ripened, and bearing more than 100 fruits per cone. The fruit is a small membranous-winged samara, 2 to 3 mm long that contains one seed. Dispersal is mainly by the wind. Seeds ripen in February, March and August in South America (NAS, 1980), and from September to January in Costa Rica (Rajas et al., 1991).

There is considerable confusion in the taxonomy of Alnus acuminata. Furlow (1977) reported the species as Alnus acuminata H.B.K., but in his last revision (1979) he classified it as Alnus acuminata ssp. arguta. The species also has been described as Alnus jorullensis H.B.K. by Carlson and Dawson (1985). Holdridge (1951) concluded that if subspecies populations exist they apparently intergrade into each other and because of similarities in wood and silvicultural characteristics they may be considered as a single species, at least from a forestry viewpoint.

Distribution and ecology
Alnus acuminata is native to the American continent ranging from Mexico to Northern Argentina in elevations between 1,200 and 3,200 m.a.s.l. where annual rainfall is 1,000 to 3,000 mm or more. The species occurs where mean annual temperature ranges between 4o, and 27oC; however it can withstand temperatures dipping briefly below 0o C (NAS, 1980).

Alnus acuminata is a fast-growing pioneer species that regenerates naturally in open, disturbed areas. It grows in moist soil environments, usually along the banks of streams, rivers, ponds, and swamps where it typically forms dense pure stands.
It also can be associated with wet flood plains, or moist mountain slopes, although it may be adapted to somewhat drier conditions. However, it is usually restricted to zones with extra soil moisture such as cool, tropical highlands, and cool, high-latitude regions with abundant rainfall where mist and cloud cover can be a source of fog-drip precipitation. In tropical highlands of Central and South America, clouds and mist am important in supporting Alnus acuminata and grass, when associated, through the dry season.

Alnus acuminata prefers deep, well-drained soils with high organic matter content. However, it is commonly found growing on shallow soils, such as landslides. Rojas et al. (1991) report that it will grow in soil with pH as low as 4.5.

Uses
Timber. Alnus acuminata wood is light brown-yellow to pink, odorless, and tasteless, without differences between the heartwood and the sapwood. Reports on specific gravity vary from 0.34 to 0.39 (Tuk, 1980) and 0.5 to 0.6 (NAS, 1980). The calorific value is 19,250 kJ/kg (CATIE 1986). The wood dries easily and preserves well. It has even grain, seasons fairly well, and is easy to work and finish by hand or machine. Despite its light weight it is tough and strong, and is sometimes used for construction. Timber is also used for fuelwood, posts poles, light lumber, boxes, broom handles, domestic implements, plywood cores, particle board, and musical instruments. A match company in Colombia evaluated more than 20 native species and found Alnus acuminata wood best suited for making stick matches (Ing. R. Arismendi, Personal Communication).

Agroforestry. Farmers in Costa Rica have grown Alnus acuminata in pastures and as a shade tree for coffee crops for more than 90 years. Trees are regenerated naturally or planted from nursery stock at spacings of 8 to 14 m (about 100 trees/ha).

One benefit of including trees in cattle pastures is greater milk production–cows on pastures with Alnus acuminata produce more than cows on pastures without it (Budowski, 1983). Farmers in Costa Rica sometimes construct crude fences around individual seedlings to protect them from livestock-protection is needed until trees grow tall enough that livestock can not browse new growth.

Silviculture
Propagation. Alnus acuminata is propagated by seeds (more than 2 million pure seeds/kg). Seeds are recalcitrant and must be planted quickly-viability decreases from 70% to 20% in a few months. Seed viability can be extended by storing seed in airtight containers at 5oC-viability is 50% and 31 % after 2 and 3 months, respectively (Rojas et al., 1991).

No seed pre-treatment is necessary. Rojas et al. (1991) recommend broadcasting seed in germination beds (15 to 20 g of seed per ml of bed) and covering them with a very thin layer of mixed soil and sand. The germination bed should be a 1:1:2 mixture of fine soil, sand and organic material. Seeds should be watered twice daily with a very fine mist to maintain soil humidity. Overwatering may cause darnping-off. Germination starts 6 to 7 days after sowing and is complete within 15 days. The most vigorous seedlings should be transplanted to pots or back plastic bags 20 days after germination. Seedlings may be planted out when they are 20 cm tall (in about four months). Bare-root seedlings and stump cuttings are possible alternatives to container-grown seedlings. Seedlings do not compete well with weeds so frequent weeding is important (Rojas et al., 1991).

Management. Alnus acuminata is grown in plantations mainly in Colombia and Costa Rica, but in other countries as well. In Colombia, an initial spacing of 2.6 x 2.6 m (1,480 trees/ha) is common (Sieco Smit, 1971). In Costa Rica, an initial spacing of 3 x 3 m is preferred. At least two thinnings are recommended, the first after the third year and the second after 10 to 15 years, leaving 250 to 350 trees per hectare. Trees are harvested in rotations of about 20 years. Average annual wood production is 15 to 20 M3 per hectare. According to Canet (1985), a stand of 30-year-old trees with a density of 35 trees/ha yielded 70 m3/ha of timber, 18.3 ton/ha of dry fuelwood, and 3.6 ton/ha of leaves and fine branches. Alnus acuminata resprouts vigorously from the stump after cutting.

Symbiosis
Alnus acuminata, like other Alnus species, forms a symbiosis with actinomycetes of the genus Frankia. Rojas et al. (1991) report that nodules begin to grow on 13-day-old nursery seedlings. Estimates of nitrogen fixation for Alnus species vary widely between 62 kg/ha/yr for A. sinuata in Alaska and 125 kg/ha/yr for A. glutinosa to 320 kg/ha/yr for A. rubra in Oregon (Carlson and Dawson, 1985). In a 2-year-old A. acuminata plantation in the Colombian highlands (1200 trees/ha), Carlson and Dawson (1985) estimate an annual increase in soil nitrogen of 279 kg/ha. Acetylene reduction values for 120-day-old A. acuminata greenhouse seedlings inoculated with a crushed nodule suspension were between 32.5 and 86.4 pmol of ethylene produced per gram of nodule dry weight per hour (Russo and Berlyn, 1988).

Pests and diseases
Alnus acuminata is susceptible to attack by defoliators (Nodonota irazuensis and Nodonota ca. parvula, Coleoptera, Chrysomelidae). A stem borer Scolytoes alni, (Coleoptera, Scolytidae) has been observed in Costa Rica during the dry season. Vertebrates such as Sciurus sp. (Rodentia, Sciuridae) may cause debarking and Sylvilagus brasiliensis (Lafomorpha, Leporidae) may destroy seedlings. Fungi such as Fusarium sp. and Trichoderma sp. may damage seeds; Colletotrichum Sp. and Phomopsis sp. may affect leaves; and Rosellinia sp. may affect stems and roots in mature trees (CATIE, 1991).