Alnus nepalensis – A Multipurpose Tree for the Tropical Highlands

Alnus nepalensis D. Don. (Betulaceae) called utis in Nepal, maibau in Burma, and Indian or Nepalese alder in English, is one of 35 species of alder worldwide. Alnus is one of 15 genera of trees that fix nitrogen but are not in the legume family. 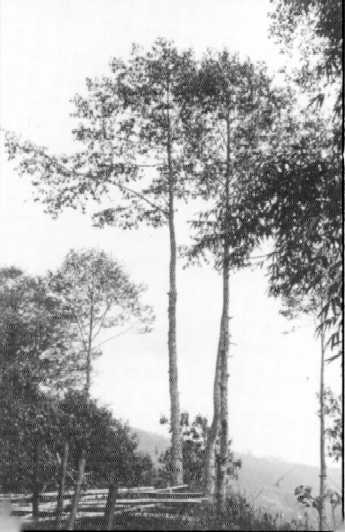 BOTANY
Utis is a deciduous or semideciduous tree with a straight trunk that reaches up to 30 m in height and 60 cm (rarely to 2 m) in diameter. The bark is dark green or grey, often with yellowish patches and short, raised lenticels. The leaves, which are frequently damaged by insects, are alternate, elliptical, 6-20 cm long, 5-10 cm wide, entire, denticulate or sinuate. The upper leaf surface is dull or shiny dark green, the lower is pale with dot-like, yehow-brown scales.

Open-grown Alnus nepalensis in eastern Nepal. (Peter Neil)
The narrowly cylindrical clusters of tiny flowers, or catkins, occur as male or female separately on the same or different twigs in autumn. Male catkins are yellow, 10-25 cm long, and hang in clusters at the end of twigs. Female catkins are much shorter, erect and woody, and occur on branching side twigs. The fruits, which superficially resemble cones of the pine family, are dark brown, upright on short stalks, elliptical, composed of many spreading, hard woody scales. Empty cones may persist on the tree. The seeds are light brown, circular and flat with two broad membranous wings, more than 2 mm across. Seeds ripen from November to March depending on geographical locality.

ECOLOGY
A. nepalensis occurs throughout the Hiinalaya at 500-3000 m elevation from Pakistan through Nepal, northern India, Bhutan and Upper Burma to southwest China and Indochina. It is found naturally in moist, cool or subtropical mountain monsoon climates, with an average annual rainfall of 500-2500 mm and a 4-8 month dry season. Mean annual temperatures range from 13-26oC. Soils tend to be moist and well-drained, varying from loam and loamy sand to gravel, sand, and clay. At lower altitudes particularly, utis occurs on moist sites, such as near rivers and in ravines, but it will colonize rocky sites exposed by landslips, or lands abandoned following cultivation. It occurs naturally in both pure and mixed stands.

Alnus nepalensis is a pioneer species and grows well in full light although it will also tolerate shade. It does not require high soil fertility, but prefers permeable soils and should not be planted on compacted or eroded soils. Utis grows well on soils with high water content, but not on waterlogged soils. It grows poorly on dry, exposed ridge-tops.

USES
Utis wood is moderately soft with densities of 320-370 kg/M3 (NAS 1980) to 480-590 kg/m3 (Lamichhaney 1984). Wood calorific value is low (18,230 kJ/kg – Hawkins 1982, or 20,480 kJ/kg – Webb et al. 1984), but utis wood, like that of other alders, dries rapidly and burns easily. Although not among the best construction timbers, utis has an even grain,
seasons fairly well, and is easy to saw and finish by hand or machine. The wood preserves fairly well, but is perishable if subject to alternately wet and dry conditions. The wood is also subject to discoloration by oxidation and fungal sap stain. It is suitable for boxes, splints and matches (Dey and Ramaswami 1960) and for newsprint (Guha 1965).

The foliage is of low to moderate value as fodder. Mature leaves are eaten by sheep and goats, but not cattle (Panday 1982, Singh 1982). Leaves are also used as animal bedding. The tree’s bark is occasionally used for tanning and dyeing (Little 1983).

Utis is well known as a species that gives some stability to slopes that tend to slip and erode. Seed has been broadcast to stabilize landslides. In Burma, A. nepalensis has been effectively used to reforest abandoned taungya areas (Troup 1921, NAS 1980).

Cardamom is planted under utis in eastern Nepal (including about 80% of cardamom plantations in flam District – Ghimire 1985). On terraced slopes in Nagaland State, India, A. nepalensis is commonly pouarded for poles and interplanted with crops such as maize, barley, chili and pumpkin (Zeliang et al. 1985). The trees provide fuelwood, green leaf manure, and
help in soil conservation. Farmers in India cultivate utis on the berms (mounded earth borders) of crop fields (Kayasha 1985).

ACTINORHIZAL SYMBIOSIS. Alnus nepalensis forms a symbiosis with N-fixing actinomyeetes of the genus Frankia. Although the biochemistry and physiology of the ‘alder-type’ symbiosis with Frankia are not fully understood, cell-free preparations of nitrogenase have been obtained from, Alnus nodules (Postgate 1979). Studies in West Bengal indicated that nitrogenase activity was highest in young nodules irrespective of tree age and concluded that, A. nepalensis is capable of fixing significant amounts of nitrogen (Sharma and Ambast 1984). Sharma et al. (1985) investigating soil properties under five stands in the Eastern Himalaya found that total soil N increased with increasing stand age.

PROPAGATION. The species is readily propagated from seed (1.6 to 2.3 million seeds/kg, if pure). It is orthodox and will retain viability for at least a year if properly dried and stored in seated containers. No pretreatment is needed. Germination starts 1-2 weeks after sowing and is completed 2 weeks later. Transplanting into containers can begin 4-5 weeks after germination. Below 1200 m elevation seedlings should reach planting size (25-35 cm) in 4-5 months, but above this altitude they may take as long as 11 months (Napier and Robbins 1989). Young seedlings are liable to damage by ants and defoliation by frost and are very often killed.

Most planting is done with containerized seedlings, although bare-rooted seedlings have proven successful given proper lifting and handling and nioist site conditions. Wildings (natural seedlings) have also been used successfully, especially on north-facing slopes. Direct sowing is an alternative. The seed must be fresh and have a high germination capacity. Ample quantities should be used, and the seed sown on exposed mineral soils. Good results are obtained when soil from under old trees is mixed with seed to facilitate even broadcasting and to introduce Frankia. Vegetative propagation has been unsuccessful (Lohani et al. 1980).

SILVICULTURE. Alnus nepalensis has a wider range of site tolerance than its natural distribution would suggest. It has been successfully established in plantations in a number of countries, mostly within its natural range, but also in Hawaii and Costa Rica. A spacing of 2.5 x 2.5 m is commonly used for plantations in Nepal, although a closer spacing is desirable for fuelwood crops. Poles and fuelwood can be harvested after five years on good sites.

Utis will coppice after cutting, but successful regrowth seems to depend on season and locality – wet season feuing and moist localities being best. Small diameter timber can be harvested in less than 10 years. Longer rotations are needed for ordinary saw timber.

Actual growth rates of A. nepalensis vary considerably, particularly in response to differences in soil moisture. Recorded growth in Nepal’s middle mountains – compares favorably with figures from West Bengal and Hawaii. A 9-year-old stand in Nepal had a meanannual increment in height of 2.7 m and in diameter at breast height of 2.9 cm. Corresponding figures for 10- year-old stands in West Bengal and 8.5-year-old trees in Hawaii were 1.7 m and 1.6 cm (Homfray 1937) and 0.7 m and 1.2 cm (WhiteseU 1976), respectively. In Costa Rica a 3-year-old stand had a mean annual icrement in height of 2.3 m and in diameter of 3.6 cm (Palmer, cited in Lamichhaney 1984). Biomass and volume tables have been produced in Nepal.

PROVENANCES. Research in Nepal has shown local provenances to perform best at any given site. No provenances have proven to be of overall superiority (Lamichhaney 1984, Jackson 1987).