FACT 96-02, January 1996
A quick guide to multipurpose trees from around the world

Andira inermis (Sw.) Kunth ex DC (Berendsohn 1989) is a nitrogen fixing tree that is commonly grown as an ornamental. It has a handsome spreading crown, evergreen foliage, showy pink flowers and responds easily to management. In El Salvador it is known as almendro de río or river almond because its fruits are similar to the fruits of Terminalia catappa (beach almond). Andira inermis is a multiple use tree that has not been extensively used in agroforestry or other reforestation programs because of relatively slow growth rates; however, it offers refuge for wildlife year-round and could be used as fodder for ruminants and other domestic animals. 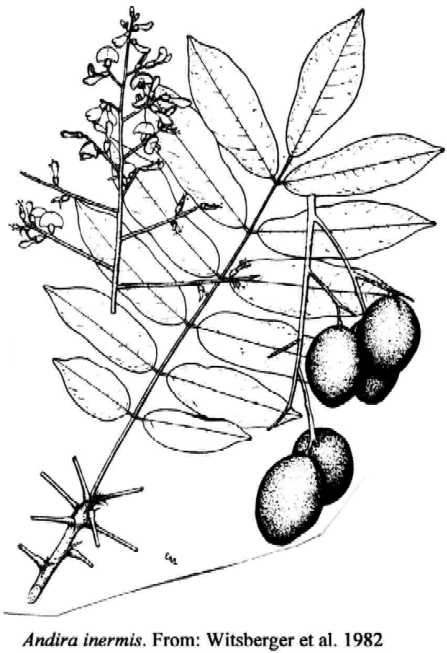 Botany
This tree is a legume that belongs to the Papilionoideae sub-family. It grows to 35 m in height and more than 90 cm in diameter (Allen and Allen 1981, personal observations). It has pink flowers in racemes that are self-incompatible and outcrossers (Bawa 1974). It has a dense and spreading crown with bright tan young leaves and shiny green mature leaves with entire margins. Leaves are pinnately compound with 7 to 17 leaflets. The stem has a rough outer surface. It has a drupe-like fruit with one seed that does not open at maturity, an exception among the legumes (Witsberger et al. 1982, Little and Wadsworth 1964). In the Pacific plains of Guatemala, the trunk frequently forms buttresses up to 3 m tall (Standley and Steyermark 1964).
Synonyms include Andira jamaicensis (W. Wright) Urban and Geoffroya inermis W. Wright (Little and Wadsworth 1964).

The number of common names that Andira inermis has is related to its widespread distribution, many uses and botanical characteristics. Names include Almendro de río (river almond) and almendro macho in El Salvador, Guacamayo in Honduras, carne asada in Costa Rica, moca blanca in Puerto Rico, and cabbage angelin, partridge wood or cabbage bark in the United States (Witsberger et al. 1982, Little and Wadsworth 1964).

Ecology
Andira inermis is found in riparian zones, along rivers and in areas with a high water table. It grows in alluvial forests in Central America but may be found in drier areas. It is found along roadsides, river banks, woodlands and pastures, from sea level to 900 m above sea level (Witsberger et al. 1982, Little and Wadsworth 1964). It requires low light for establishment and high light for development. It is an evergreen tree with the foliage continually being replaced throughout the year, especially before flowering (personal observations). In Puerto Rico, two flowering seasons are observed, one between January and February and the second one, between May and September (Little and Wadsworth 1964). In Barro Colorado Island, Panamá, trees may flower for nine months under suitable moist conditions (Croat 1978). This pattern is also observed in trees growing in urban areas in El Salvador where trees flower between December and July (personal observations).

Distribution
Andira inermis is native from southern Mexico to Peru, Bolivia and Brazil. It has been introduced in the Antilles, Caribbean islands, Florida and Africa (Witsberger et al. 1982).

Agroforestry. It is used as a shade tree in coffee plantations because it has a spreading crown and responds well to pruning (Witsberger et al. 1982).

Wildlife. Bats eat the fruits. Flowers are visited by bees, birds, and butterflies (Allen and Allen 1981; Janzen 1976; Little and Wadsworth 1964).

Forage. Preliminary studies by scientists at the University of El Salvador showed that the foliage is edible and palatable for ruminants. Research is now being done with rabbits (Jacob Palacios, personal communication).

Wood. The wood is very hard, heavy (0.77g/cm³), and very resistant to attack by fungi and termites (Guzmán 1947; Little and Wadsworth 1964; Behrendt et al. 1968; Allen and Allen 1981). Andira inermis lumber has been used for bridges, railroad tracks and waterfront docks and also to make furniture, billiard-cues, umbrella handles and boats (Little and Wadsworth 1964).

Other uses. The bark is reported to have vermifuge, purgative and narcotic properties (Guzmán 1947). Prunings from shade trees in coffee plantations are good firewood. In the wild, this tree also offers a suitable environment for some plant epiphytes like orchids, bromeliads, mosses and ferns. In conservation programs, it has been used to restore degraded watersheds where moist conditions are prevalent (El Salvador Forest Service, personal communication).

Silviculture
Propagation. Mature fruits are collected and kept under cool conditions. The hard seeds need to be scarified before planting. The El Salvador Forest Service recommends making a cut on the hard fruit endocarp with a file and then planting them in seed beds or plastic bags.

A recent seed treatment study for A. inermis compared seeds that were scarified with a file; placed in hot water at two temperatures (70ºC and 80ºC) for 5, 10, and 15 seconds; or non-treated (Navarrete and Orellana, unpublished).

Establishment. One-year-old plants, 50 cm tall or more, can be transplanted during the rainy season. Andira inermis can also be direct seeded. Two or three seeds, per site, are planted directly in the field (El Salvador Forest Service, personal communication).

Symbiosis
Allen and Allen (1981) reported nodulation of A. inermis in Hawaii. In Brazil, Faria et al. (1987b, 1986) found that A. inermis and six more Andira species showed nitrogenase activity with the acetylene reduction assay. They also report that isolated rhizobial strains showed an infective-host range within the cowpea miscellany.

Limitations
Andira inermis does not grow well in areas with a marked dry season. It grows very slowly even with suitable moist conditions (Little and Wadsworth 1964). Bark and seeds are reported to be poisonous (Guzmán 1947). Processed wood is attacked by borer insects when used under saltwater (Behrendt et al. 1968). Fruits are attacked by the weevil, Cleogonis sp. (Janzen 1976) with possible effects on seed germination.

Related Species
There are approximately 30 Andira species distributed in Tropical America and one in Africa (Pennington 1995). Some important species in Brazil are A. racemosa Lam., A. fraxinifolia, A. nitida Mart., A. frondosa, A. legalis and A. anthelmia (Vell.) Macbr. (Faria et al. 1987a, 1987b, 1986). Andira galeothiana Standl. and A. vermifuga Mart. are used as fish poison, vermifuge, narcotic or vomiting agents. Andira retusa HBK and A. inermis yield the alkaloids berberine and angelin. Andira araroba, is the source of a fungicide (chrysarobin) used to treat skin diseases (Allen and Allen 1981).

Research Needs
Studies are needed to determine the amount of nitrogen Andira inermis provides to crops in agroforestry systems. Provenance and propagation studies are also needed.

For a complete set of references write to FACT Net. The author acknowledges the assistance of the Facultad de Ciencias Agronómica, Universidad de El Salvador.