NFTA 88-06, November 1988
A quick guide to useful nitrogen fixing trees from around the world

A variety of cultivars and the many ways they can be used in farming systems have made pigeonpea (Cajanus cajan) popular to small scale farmers. It is the major pulse crop of the semiarid tropics, has been used for centuries in intercropping systems, and is an ideal source of fodder, food and firewood in agroforestry systems. 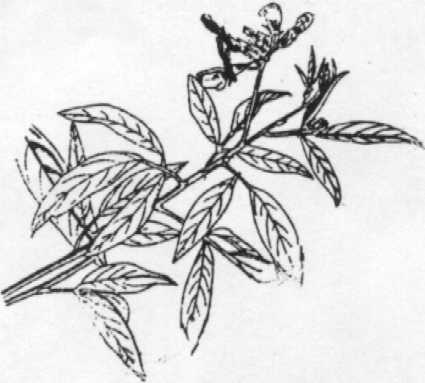 BOTANY
C. cajan (L.) Millsp. is a leguminous shrub that can attain heights of 5 m. Pigeonpea probably evolved in South Asia and appeared about 2000 BC in West Africa, which is considered a second major center of origin. The slave trade took it to the West Indies, where its use as bird feed led to the name “pigeonpea” in 1692 (van der Maesen 1986). Leaves are trifoliate and spirally arranged on the stem. Flowers occur in terminal or axillary racemes,
are 2-3 cm long (Purseglove 1968), and are usually yellow, but can be flocked or streaked with purple or red.

Pods are flat, usually green in color, sometimes hairy, sometimes streaked or colored dark purple, with 2-9 seeds/pod. Seeds are, widely variable in color, 6-9 nun in diameter, and weigh 4-25 g/100 seed (Sheldrake 1984). C. cajan was long considered to be one of two species (with a minor W. African species) of the genus Cajanus DC. However, this genus is now thought to be congeneric with Atylosia and Endomallus, and also includes species of Rhynchosia and Dunbaria (van der Maesen 1986). Cajanus is now recognized as having 32 species.

ECOLOGY: Pigeonpea is hardy, widely adaptable, and more tolerant of drought and high temperatures than most other crops. It grows on acid sands in the Sahel and alkali clays in India. Frost or excessive soil salinity are not tolerated. and waterlogging for 3-4 days severely reduces yields (Chauhan 1987). Various cultivars are grown from sea level to 3,000 in.

USES: Food. Pigeonpea is best known as a human food. Short duration shrubby varieties such as ICPL 87 can yield 5-8 t/ha of grain when grown as sole crops (Reed 1987). In India, decorticated, split dried peas (dam) are an important protein source. Dahl is 25% protein and has a good balance of all amino acids except methionine and cystine, which are slightly deficient for the human diet (Faris et al. 1987). Some anti-nutritional factors are present, but are destroyed by cooking. In the Caribbean and Fast Africa, pigeonpeas are eaten green as a vegetable and are commercial grown and canned in the West Indies. Vitamin A (470 mg/100g) and C (25 mg/100g) contents of vegetable pigeonpeas are five times those of green peas (Faris et al. 1987). When grown as a perennial, pods may be picked ripe or green for a long time. The vegetable line ICPL24 produced 11 t/ha of green pods in five pickings in Gujarat, India (Faris et al. 1987).

Animal feed. Pigeonpea is an excellent fodder species. Crude protein values of fresh forage range from 15-24% (Whiteman and Norton 1981). Its exceptional nutritional value and high productivity can give good liveweight gains. In Hawaii, Henke et al. (1940) reported cattle weight gains of 280 kg/ha/yr in pure pigeonpea compared with 181 kg/ha/yr in mixed grass pastures over a 6.5 mo grazing period. Foliage is retained well into dry seasons. Although forage production depends on the stage of the crop, growing conditions, and management, experimental yields exceeding 50 dry tons/ha/yr have been reported in intensively managed cut and carry sole stands (Whiteman and Norton 1981). Under less intensive management, 3-8 dry t/ha/yr can be expected. Poor early growth makes it unable to compete well in mixtures with grasses. Grain, whole pods, and milling trash have been proposed as a substitute for soybeans and maize in poultry and pig feed, but deficiencies in some amino acids and antinutritional factors may limit its suitability unless expensive additives or processing are used (Wallis et al. 1986).

Wood. Pigeonpea sticks are an important household fuel in many areas. Productivity more than makes up for comparatively poor fuel characteristics (low specific gravity and high moisture content). Stick yields of 7-10 dry t/ha/yr are routinely reported for medium and early duration lines, and yields of 30 t/ha/yr from irrigated, early duration varieties have been reported in India (ICRISAT 1986). Perennial varieties can produce 10 t/ha/yr of dry material over a 2-3 year period on good sites. Sticks also produce thatch and basket materials.

Other Uses. Pigeonpea is modulated with Rhizobium of the cowpea type and is an effective green manure crop. Whiteman and Norton (1981) recommend incorporating high density plantings at or about the time of flowering. When allowed to perennialize, pigeonpea can drop 1.6 dry t/ha/yr of litter in the first year (Sheldrake and Narayanan 1979). It is used in folk medicine in West Africa and has been proposed as a nurse crop in India (Purseglove 1968).

CROPPING SYSTEMS: Pigeonpea is used in a great variety of cropping systems throughout the tropics. Although average grain yield (650 kg/ha) and harvest index (20-25%) are low, its hardiness and ability to grow on residual soil moisture make it attractive to small farmers (Sheldrake and Narayanan 1979). Early growth is slow, making it an ideal, noncompetitive intercrop with cereals such as sorghum and millet. Such systems give full sorghum yields and over 70% of the pigeon pea grain harvest that could be obtained if the two crops were grown separately (Willey et al. 1981). Pigeonpea is a short-day plant, and its maturation period is related to daylength sensitivity of particular cultivars (Sheldrake and Narayanan 1979). Farmers in India, where pigeonpea is usually grown as an annual, exploit this trait. In the north, it is planted as a late-maturing crop (9-11 mos.) at relatively wide spacings (50,000/ha) during the longest summer days. In the peninsula, medium duration varieties (6-8 mos.). which flower as days grow shorter, are planted solely or intercropped with cereals (Willy et al. 1981; Sheldrake 1984). Early varieties, which are usually determinate (flowers borne on terminal racemes) and photoperiod insensitive, are sown densely (100,000 plants/ha) as sole crops during the rainy season or the post rainy season, when they use stored soil moisture and benefit from fewer pests and diseases (Sheldrake 1984). 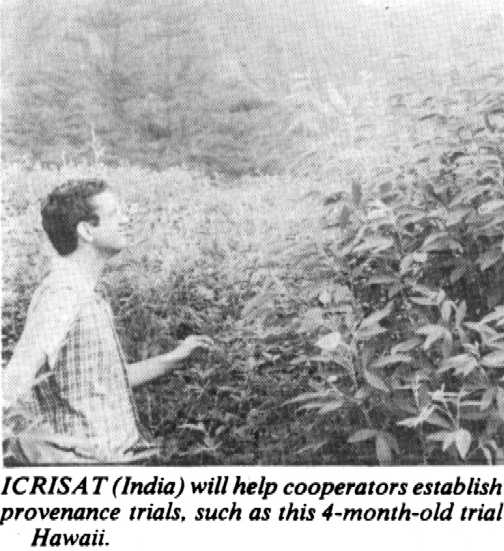 In Africa, greater use is made of its perennial nature. In East Africa, long duration pigeonpea is sown with cereals or short duration grain legumes such as cowpea. After the grain crop is harvested, pigeonpea grows to its full height and pods are used as a green vegetable or pulse. In the next year, pigeonpea is either ratooned and the cereals are planted, or it is allowed to dominate the field for pod production (Omanga and Matala 1987). Cereals are rarely planted among unratooned pigeonpea in the second year, because it is too competitive. Animals allowed to graze fields after cereals are removed eagerly browse the pigeonpea (Omanga and Matala 1987).

Ongoing work at ICRISAT suggests it can be used as a semipermanent, perennial component in alley cropping. Its traditional uses as a rotational/fallow crop in East Africa and as a part of shifting agriculture in SE Asia deserves more attention. It has been used as food and fodder- bearing windbreaks and live fences. It is widely planted as a backyard plant for shade and as a green vegetable.

ESTABLISHMENT: Pigeonpea is best established by direct seeding in a well-prepared field. Gaps should be filled with seedlings grown -in pots. No pre-germination treatment of seeds is needed.

BREEDING SYSTEMS: Pigeonpea (2n=22) is mostly self-pollinating, but a range of 3 – 95% outcrossing has
been reported. This is probably a function of environment and populations of pollinating insects (Sheldrake 1984). When pure lines need to be maintained, it may be necessary to cover plants with muslin bags to exclude insects. The “wrapped flower” character, with overlapping petal lobes, delays flower opening and has been used to increase the degree of selfing (Sheldrake 1984). Male sterile lines have been developed and are used in hybridization programs. One ICRISAT hybrid, ICPH8, consistently yielded 25% more grain than the best control in 15 trials in India (Wallis et al. 1986). Interspecific hybrids with species of the congeneric genus Atylosia have shown promise as fodder and cover crops.

PESTS AND DISEASES: In India, wilt (Fusariun udum) and sterility mosaic (mite-borne virus?) are the most important diseases (ICRISAT 1986). Wilt and leaf spot (Mycovellosiella cajani) are important in East Africa (Omana and Matala 1987). Rust (Uredo cajani) is the major disease in the Caribbean (Reed 1987). Root rot (Phytophthora dreschsleri) can be a problem in poorly drained fields. Resistance to these diseases, notably wilt and sterility mosaic, exists and should be exploited when pigeonpea is used as a perennial or grown in areas of heavy rainfall. Important insect pests include the pod borer, (Heliothis armigera, and the podfly, Melanagromyza obtusa, (Reed 1987). Scale insects (Coccus spp.) can build up rapidly and severely damage perennial stands. Insect resistant lines are not yet widely available.

Chauhan, Y.S. 1987. Screening for tolerance to salinity and waterlogging: case studies with pigeonpea and chickpea IN: Adaptation of chickpea and pigeonpea to abiotic stresses.Proc. of Consultants’ Work 19-21 Dec. 1984, ICRISAT India.