Casuarina cunninghamiana Miq. (river oak, river she-oak) is one of the largest species of the genus Casuarina, attaining a height of 20-35 m and diameter of 0.5- 1.5 m. ‘Me foliage consists of deciduous, jointed needle-like branchlets known as cladodes with reduced scale-like leaves in whorls of 8-10, commonly 9. Young trees typically have a pyramidal crown with ascending branches; the crown becomes more open with maturity. C. cunninghamiana, with a haploid chromosome number of 9, is dioecious and wind pollinated. Male flower spikes are borne at the tips of shoots and small rounded female flowers occur in clusters along the branches. Fertilized female flowers develop into rounded cones (6-10 mm diameter) which ripen in the autumn and shed seed rapidly at maturity (Boland et al. 1984, Turnbull et al. 1986). 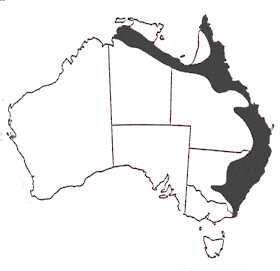 The native range of the species mends from southern New South Wales, where it is a protected species to north Queensland, Australia (15-37o S latitude). It typically occurs in pure stands along freshwater streams and rivers, extending to adjacent valley flats and rarely hillsides. A distinct subspecies, C cunninghamiana subsp. miodon, occurs in the Northern Territory (Wilson and Johnson 1989). The altitudinal range of the main occurrence is 100-500 m while the range is 20-1000 m. It may hybridize with the closely- related species C. glauca (Turnbull et at. 1986).

Precipitation in the native range varies from 600-1100 mm per annum (50 percentile). Some populations occur in areas receiving as little as 375 mm, but they would have access to groundwater due to their riverine habitat (Turnbull et al. 1986). As a planted exotic, the river she-oak appears only moderately drought tolerant (Bulloch 1986). Once established it will survive drought periods, but growth will be reduced without access to groundwater.

Maximum temperatures in parts of the native distribution exceed 32oC while southern populations at higher elevations may experience up to 50 frosts per annum and temperatures down to -8oC (Turnbull et al. 1986). Certain individuals within a high elevation provenance showed slight or no injury five months after exposure to mid-winter minimum temperatures of -12oC and heavy snow in a two-year-old field planting in California, USA (Casuarina Improvement Association, unpublished data). 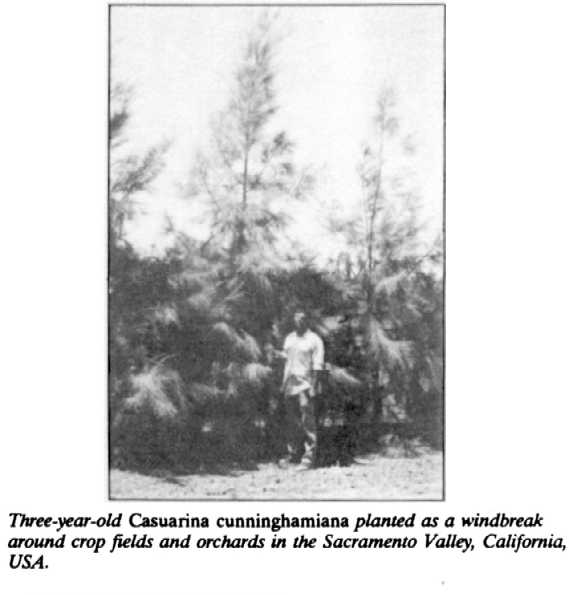 Shelter: Its fast growth, moderately dense canopy and retention of lower branches close to ground level when young make the species well-suited for use in windbreaks to protect field and horticultural crops (NRC 1984). Side trimming of single-row shelterbelts is recommended to maintain form and foliage density. Older trees may tend to open out at the base if trimming is infrequent or too severe (Bulloch 1986).

Erosion Control: Native stands of the species are protected due to their value in streambank stabilization (Boland et al. 1984). In Egypt, it has been planted along irrigation canals to stabilize batiks and prevent excessive wind deposition of sand in the canals (El-Lakany 1983).

Fuelwood: C. cunninghamiana, like other casuarina species, is recognized as an excellent source of fuelwood. Wood density ranges from 800-900 kg/m3 (Turnbull et al. 1986). The wood is very easily split, can be burned either green or dried, and bums slowly leaving little ash (NRC 1984). In a sample evaluation of biomass properties, C. cunninghamiana wood with a specific gravity of 0.72 composed 73% of total biomass and yielded 4544 cal/g upon combustion (Rockwood et al. 1980).

Wood Products: The timber is moderately strong, tough, durable and straight-grained. However, excessive splitting and warping during seasoning limit its utility for posts, poles and sawn lumber. The wood has been used in small dimensions for products such as furniture, turnery, shingles, flooring, packing cases, tool handles and barrel staves (Turnbull et al. 1986).

Other Uses: The foliage is palatable to sheep and cattle, but is considered useful only as emergency drought fodder (Bulloch 1986, Turnbull et al. 1986). It is also used in ornamental landscaping and as windbreak plantings along highways.

ACTINORHIZAL SYMBIOSIS: In its native range, root hairs of C. cunninghamiana commonly become infected with the symbiotic actinomycete Frankia, thereby forming root nodules which are the site of N2 fixation (NRC 1984). Artificial inoculation prior to outplanting with an effective strain of Frankia greatly enhances tree growth, particularly on sites low in N. Inoculation can be accomplished by applying an aqueous suspension of crushed root nodules to young seedlings in containers or nursery beds. Pure cultures of Frankia isolated from root nodules of C. cunninghamiana have also been used for artificial inoculation (NRC 1984).

PROPAGATION AND ESTABLISHMENT: The species is readily propagated from seed (average 1.8 million/kg) and rapid germination is achieved at about 30oC. It can be vegetatively propagated by rooting young softwood cuttings using an IBA hormone treatment (Turnbull et al. 1986).

Seedlings are generally grown in containers in the nursery before outplanting in the field. Recommended spacing for single-row horticultural shelter are 1-1.5 m and for multi-row farm shelter or plantations 2-3 m (Bulloch 1986). C. cunninghamiana develops a deep fibrous root system, except in waterlogged soils where it is more shallow and spreading (El-Lakany et al. 1982).

In and and semiarid areas, C. cunninghamiana is successfully grown under irrigation using furrow, flood or drip methods (NRC 1984). It has also been irrigated using municipal and industrial wastewater effluent. The species’ dense fibrous root system is very effective at intercepting and absorbing nutrients such as N, P and Ca in wastewater compared to other tree species (Stewart et al. 1988).

Poorly modulated seedlings show a response to applications of N fertilizer. On sites deficient in P, addition of P fertilizer is
required before a growth response to N fertilizer or Frankia inoculation is observed (Reddell et al. 1988). Weed control during establishment is vital for good stand survival since C. cunninghamiana is intolerant of competition when young
(Bulloch 1986). After canopy closure, weeds are suppressed by shading and the self-mulching effect of fallen branchlets.

PESTS, DISEASES AND LIMITATIONS: Protection from grazing animals, rabbits and hares is important in young plantings (Bulloch 1986). Grasshoppers can be damaging particularly when the trees are young. Basal trunk damage and girdling may also be infected by rodents, requiring tree guards and weed control to reduce cover. C. cunninghamiana is susceptible to Phytophthora and Clitocyberoot rots (Bulloch 1986).

In Florida, USA, C. cunninghamiana has naturalized in wild areas as a result of seed spread along watercourses (NRC 1984). Therefore care should be taken with plantings along canals or watercourses to prevent unwanted escapes. Although root suckering in older trees has been reported, it is less common than with C. glauca (Turnbull et al. 1986).