Casuarina equisetifolia: An Old-timer with a New Future

C. equisetifolia has two variants. C. equisetifolia var. incana is a small (6-10 m) tree that grows exclusively along the coast of Queensland and northern New South Wales. Var. equisetifolia is a tall (10-40 m) tree found on seacoasts from Malaysia to subtropical Australia, Melanesia, Micronesia, the Philippines and Polynesia. 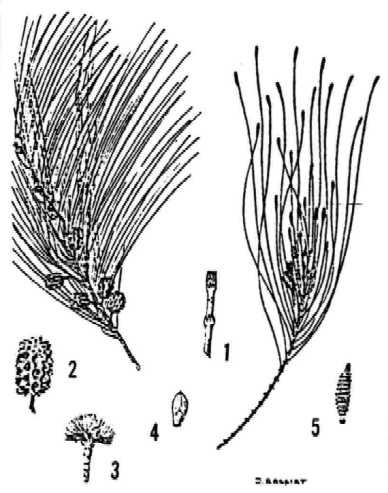 Botany
Like other Casuarinaceae, C. equisetifolia as a conifer-like appearance which is increased by hanging green branchlets and cone-like fruits. Casuarinas are actually typical angiosperms with simplified and reduced unisexual flowers. They are dioecious or monoecious, the proportion of male, female and monoecious trees varying widely from one site to another. The stem of Casuarinaceae is composed of two parts: indeterminate persistent branches which, after secondary thickening, form the permanent above-ground plant body-, and determinate deciduous branchlets (incorrectly called cladodes), about 1.5-2.5 mm in diameter. These branchlets are the major photosynthetic organs of the plant (Torrey and Berg 1988). The leaves are reduced to white or brown scales fused laterally at the base in whorls that define nodes on the branchlets.
Individual plants have striking phenotypic variations in the crown shape, branch angle, length of branchlets, and size and shape of cones. C. equisetifolia is known to hybridize with other casuarinas, such as C. junghuhniana and C. glauca.

USES. The wood of C. equisetifolia is dark brown, very hard (density 1000 kg/m3), and resistant to decomposition in soil or saltwater. It is often used as round wood for making piles, poles and fences, but splits too severely during drying to be popular as lumber; although in areas with acute wood shortages, such as southeastern China, C. equisetifolia is used for house beams and simple furniture (Midgley et al. 1983).

Because of its high calorific value (ca. 5000 kcal/kg), C equisetifolia wood is an excellent source of fuel and charcoal. People in China and India use stumps and even litter for fuel, use which also draws heavily on soil phosphorus and potassium reserves.

Because of its resistance to salt-laden winds, C. equisetifolia is widely used to stabilize coastal sand dunes. It is also extensively planted as windbreaks to protect crops. In some tropical lowland agroforestry systems it is associated with crops such as coffee, cashew nut, coconut, groundnut, sesame and various grain legumes.

C. equisetifolia and its hybrids are often used as ornamental plants for urban beautification, parks and seaside resorts. There is also potential for incorporating C. equisetifolia into mixed-species tree plantations.

ROOT SYMBIOSES. Root nodules are prolific on C. equisetifolia when they occur. Effective strains of Frankia are now available to inoculate C. equisetifolia on sites where the same Frankia-compatible group of trees (in principle any species of the Casuarina genus) have not been previously planted.

When there are no limiting factors, the response to inoculation is spectacular. Inoculation with Frankia entrapped in alginate beads is the most convenient system (Sougoufara et al. 1989). Inoculation with crushed nodules, which is sometimes practiced, should be discouraged because of the risk of introducing non-nodulating or poorly effective strains and disseminating soil-borne pathogens Pseudomonas salanacearum, a bacterium that causes casuarina wilt. Prolonged waterlogging inhibits nodule development.

As in other actinorhizal plants, spontaneous endomycorrhizal (VAM) infection occurs easily in C. equisetifolia. True ectomycorrhizae have, however, been seldom reported, except in certain coastal areas of northern Australia where a wide range of fungi are involved (Paul Reddell, pers. comm.). Proteoid roots have also been observed on their root systems. These are unique structures made of tightly packed rows of rootlets which may increase the ability of the host plant to absorb nutrients and thereby better tolerate nutrient deficient soils.

SILVICULTURE. Ripe green cones are collected from branches lopped from mature trees and dried in the sun. One kg of green cones yields 20-60 g of seeds. There are 300,000-700,000 cleaned seeds/kg. The seeds have a relatively low viability of 80-90% for fresh seeds and 30-40% for seeds after 3 years storage. Germination is usually complete within 2 weeks after planting.

At 6-10 weeks the 10-15 cm high seedlings are transplanted into containers where they are grown for 5-8 months to a height of 50-70 cm, at which time they are transplanted to the field. Another procedure is to transplant the- 10-15 cm seedlings into a new bed at a 10 x 10 cm spacing to obtain plants ready to be planted bare rooted in the field. Cuttings and microcuttings can be used when working with clones.

C. equisetifolia does not sucker as vigorously as C. glauca. Plantation planting density is usually around 2,000 plants/ha, but private farmers can plant up to 8,000 to 10,000 trees/ha (Midgley et al. 1983).

C. equisetifolia can be improved by exploiting the large phenotypic variation of its populations. There are essentially two approaches to increase both wood production and N2-fixation potential: conventional plant breeding and screening of elite individuals followed by vegetative propagation.

The N2-fixing potential of C. equisetifolia can be greatly enhanced through the use of selected clones inoculated with effective Frankia strains. Clone beta of C. equisetifolia, inoculated with strain ORS021001 and irrigated throughout the dry season in Senegal, fixed 45 g N2/yr/tree during the two first years of growth (Dommergues, unpublished data). Extrapolating this result gives a figure of 90 kg of N2 fixed annually/ha at a planting density of 2,000 trees/ha.

YIELD. Compared to some of the other casuarinas, C. equisetifolia is relatively short-lived, surviving only 40-50 years. Its growth is rapid during the first 7 years (1.5-2.5 m/yr), then gradually declines. In general, the volume yield reaches a maximum at age 15-20 years (7-10 m3 /ha yr -1). The yield could probably be greatly increased by using selected clones and applying proper management practices, including irrigation and inoculation with effective Frankia strains. C. equisetifolia plantations are generally managed on a rotation of 7-15 years.

PESTS AND DISEASES: C. equisetifolia is not prone to any serious pest and diseases, except when grown in unfavorable conditions. Pests that attack the tree include crickets and grasshoppers (Chondracis rosea, Schistocera gregaria), defoliators (Lymantria xylina), stem borers (Apate momachus) and sap feeders (Icerya spp.). The major root diseases are caused by, Pseudomonas solanacearum, Trichosporium vesiculorum and Rhizoctonia spp.