Casuarina glauca – A Hardy Tree with Many Attributes

NFTA 91-05, July 1991
A quick guide to useful nitrogen fixing trees from around the world

Known as swamp she-oak in its native Australia, Casuarina glauca grows in difficult, saline sites inhospitable to many other trees. This Casuarina has been planted in agroforestry systems primarily as a windbreak but also in woodlots for fuelwood and reserve fodder. 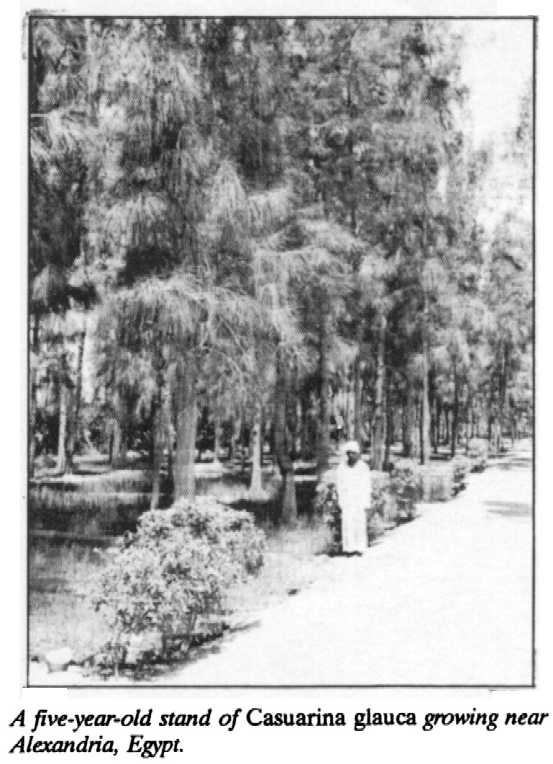 BOTANY
Casuarina glauca Sieb. ex Spreng. (family Casuarinaceae) is a medium-sized tree 10-15 m tall, occasionally reaching 25 m, with an often buttressed and fluted main stem. The dense crowns of plantation- grown trees become sparse to narrow in free-growing trees (Midgley et al. 1983). The jointed, green, cylindrical branchlets, which serve as leaves for casuarinas, are much coarser, thicker, and longer (1 diameter, 30-60 cm long) than those of C. equisetifolia or C. cunninghamiana. The length of the internodes on branchlets averages 15 mm. The reduced, true leaves appear as teeth at the nodes and vary in number from 12-16, occasionally to 20.
C. glauca is dioecious; male and female trees occur in approximately 1:1 ratios in natural stands. Male flowers appear as 4-7 cm long, light-green spikes. Female flowers are sma dark red, and inconspicuous. Males trees flower at 2-3 years of age and female trees produce fruits one year later. Trees fruit mainly in autumn, except in plantations (for example, in Egypt), where trees produce crops in both autumn and spring.

The cone-like woody fruits vary in size with provenance, ranging from 12 to 16 mm long and 11.5 to 14 mm wide (El-Lakany and Youness 1985). Fruit bracteoles are relatively thin compared to other casuarinas. C. glauca is a prolific cone producer and averages 70 seeds/cone and 1,300,000 seeds/kg (El-Lakany et al. 1989). Closed cones may persist on the tree for more than a year.

Casuarina glauca hybridizes with other casuarina species through open, wind pollination. A hybrid with C. cunningharniana has been reported in Australia and identified in Egypt (Badran et al. 1976), and a hybrid with C. equisetifolia is recognized in USA and Egypt.

ECOLOGY
Natural distribution is limited to a narrow coastal belt of southeast Australia (23-37o S latitude) with an insular occurrence on Fraser Island. Trees occasionally extend 50-80 km inland. Trees often occur along the edges of tidal reaches and estuaries, intermediary between mangrove swamps and open woodland, and sometimes on or near beach fronts. On swampy sites water tables may be only 30 cm from the surface. Trees usually occur close to sea level but are also found on seasonally moist hillsides near the sea, and up to 900 m elevation in Hawaii. In its native range annual precipitation averages 500 mm; in Hawaii rainfall is as much as 4,000 mm (NAS 1984). Annual temperatures range from 5 to 33oC.

C. glauca has proven widely adaptable. In Egypt, trees grow on clay to coarse smd, saline to calcareous, and dry to water-logged soils. Trees grow on very dry sites with saline soils in Israel and flowish on limestone soils in Florida, USA. In Hawaii, trees have been planted on parent basalt. C. glauca has also been successfully planted in Kenya, India, Malaw@ and South Africa.

Wide intraspecific variation for certain characteristics has been reported for C. glauca (El-Lakany and Shepherd 1983). Early results of provenance trials in Egypt and elsewhere suggest substantial growth gains are possible through use of proper seed sources. In an irrigated plantation on the desert fringes in Egypt, height growth varied by a factor of two among nine provenances (El-Lakany and Youness 1985). Biomass productivity of 12-year-old irrigated plantations was estimated at 496 t/ha of which wood volume was 294 m3/ha (Megahed and El-Lakany 1986). Provenance testing is underway in California, USA for frost tolerance (Merwin 1990). Irrigation is required to establish trees in desert areas.

SYMBIOSIS. C. glauca forms a symbiosis with actinomyeetes of the genus Frankia.. Spherical woody nodules, some exceeding 20 cm in diameter, are found in large masses near the base of the trunk and as deep as 10 m. Root nodules have been observed on trees in natural stands and on trees in plantations growing on very saline or water-logged sites. The greatest number of nodules are found in soils with pH ranging from 6-8.

For Casuarina species, N-fixation is greatest when species are inoculated and when inoculated with nodules from the same species (Reddell and Bowen 1985, Reddell 1990). Crushed nodules or soil from beneath mature trees can be used to inoculate nursery seedlings. Under conditions of high soil salinity, drought or water- logging, C. glauca exhibited more efficient N-fixation than C. cunninghamiana (El-Lakany 1987). Inoculum is available from CSIRO, Davies Lab, PMB, Aikenvale, QLD 4814, Australia.

USES. Shelterbelts: C. glauca finds its best use in shelterbelts, windbreaks, and amenity plantings around settlements. The trees are wind-firm and show rapid early growth. In parts of North Africa and the Middle Fast, especially in water-scarce areas, they are preferred to eucalypts for plantings. Windbreaks are planted 2-3 rows wide. Like other casuarinas, trees can be coppiced to form dense hedges. The low branching habit and extensive litter production help reduce soil erosion. Trees have also been used successfully to stabilize stream banks and shifting sand dunes.

Wood: The most universal use of casuarina is for fuel. The wood has a high calorific value (about 5,000 Kcal/kg) and tends to burn slowly with little smoke or ash. Branches, branchlets, and other litter also burn well. Casuarina wood makes excellent charcoal. Wood is reddish-brown, tough, and fissile with a density ranging from 662 (El-Lakany 1983) to 980 (Midgley et al. 1983) kg/m3. Timber is used for handles, fence raus, rafters, shingles, stakes, small sea-water piles, for flooring and turnery, and in Egypt, with some technical difficulty, for particle board. The timber does not season readily and has a tendency to warp.

C. glauca has potential for use in wide-row intercropping and, contrary to common belief, has been found to increase yields of crops sheltered (El-Sayed et al. 1983). Farmers usually dig a ditch between the crop and trees to minimize competition for water and nutrients. An excellent shade tree, it is planted along streets in many and zone cities. Like other casuarinas, the dense canopy and slow-to-decompose litter severely inhibit understory plant growth.

PROBLEMS AND PESTS. Prolific production of root suckers lends C. glauca a serious potential for weediness, especially in humid areas. It is considered a pest in Florida and the Hawaiian isles (NAS 1984). In and areas such as Egypt it has generally not become a weed, although it can spread along water courses. The tree itself is almost pest-free except for Stromatium fulvum, a wood borer which makes the stem susceptible to wind-damage and rot.