Casuarina junghuhniana Miq. occurs naturally in Indonesia where its common names are jemara or cemara (Java), and adjaob and kasuari (Timor). It is an environmentally important nitrogen-fijdng tree, hosting the actinorhiza FranW. C. junghuhniana is a fall forest tree 15-25 m taH and 30-50 cm diameter, that can grow up to 35 m in height and I m in diameter. A putative hybrid with C. equiselifolia is commercially cultivated in Thailand (Chittachumnonk 1983). C. junghuhniana is locally important in Indonesia for fuelwood, poles and soU conservation. With domestication its utility could be enhanced.

BOTANY: The crown of jemara is reasonably open and consists of numerous long deciduous branchiets bearing reduced scale leaves. It is dioecious; individual trees are carry either male or female flowers. Male flowers are borne on the tips of deciduous branchlets and female “cones” in the axils of scale “leaves” on permanent shoots. This species grows rapidly with a strong apical dominance. It has the capacity to produce vigorous root suckers and female trees seed abundantly.

DISTRIBUTION: The taxonomy of C. junghuhniana is very confused and requires revision. Currently the species is considered to consist of two subspecies. Subspecies junghuhniana is found on the islands of Java, Bali, Lombok, Sumbawa and Flores. A subspecies tentatively called timorensis occurs on Timor, Wetar, Sumba and perhaps Sumbawa, Indonesia. Variation within each subspecies further complicates the subgroupings. The subspecies junghuhniana consists of discrete populations having coarse, fme, and intermediate textured deciduous branchiets but the patterns of variation are currently unresolved. The coarse forms may be related to tree growth on exposed sites. The coarse form is notable for its rugged, deeply furrowed corky bark which is unusual for a Casuarina. Subspecies timorensis on Timor is also thought to consist of two forms which the locals term ‘white’ and “black’ casuarinas. The hillside form has long, robust deciduous branchlets which in the riverine form are short and thin. Provenance trials of this Casuarina have not been conducted. Environmental variation in natural habitat, however, suggests that considerable genetic variation is present.

ECOLOGY: Casuarina junghuhniana is wholely tropical in distribution, and is a native of highlands in Indonesia where it pioneers deforested lands such as screes (rocky slopes) and grasslands, and in disturbed areas it replaces mixed mountain forest plant communities (NAS 1984). Subspecies junghuhniana typically grows in extensive pure stands on volcanic slopes between altitudes of 1500 to 3100 m but can also occur below 100 m. Subspecies timorensis is normally found at lower altitudes, especially in Timor where it grows from near sea level to 300 m. Rainfall in its natural habitat is monsoonal with a well-defined summer maximum and a range of 700-1500 mm (NAS 1984). C. junghuhniana often forms pure stands in dry and periodically burned- over areas. It is also found along gravelly stream beds in Timor. Once trees reach a few meters in height they are fire resistant and have good sprouting ability if fire damaged. C. junghuhniana grows in a wide range of soils from volcanic, sandy to compact clay sod and including very acidic sites, pH 2.8 (Chittachumnonk 1983). It also appears well-adapted to growmg on alkaline soils in Timor (Turnbull 1989 pers. comm.). It can tolerate waterlogging up to 104 days (Verhoef 1943). It is considered moderate (NAS 1984) to very (Djogo 1989) drought resistant and is especially good as a pioneer on landslide-prone soils (Diogo 1989). In Timor it commonly grows on Umestone-derived soils.

USES: As with other casuarinas, wood of C junghuhniana is highly suitable for fuelwood and charcoal production. Its calorific value in charcoal form is 7180 kcal/kg, among the highest for a firewood species. Its wood is very heavy having an air-dry density of 900 kg/m3 (Chomcharn et al. 1986).

C. junghuhniana is especially suitable for wind breaks and for ornamental plantings. It is not used as fodder. In Timor C. junghuhniana is used for soil improvement, live fencing, building material and firewo4 and branches and foliage are burnt and the ashes spread in village gardens (Djogo 1989). It has been used in irevegetation and land rehabilitation projects in Java for nearly a century. In Thailand its straight-stemmed character makes it a popular underground pile for construction work as well as for fish-trap stakes. It is grown on farm boundaries for pole production in Kenya and Tanzania. 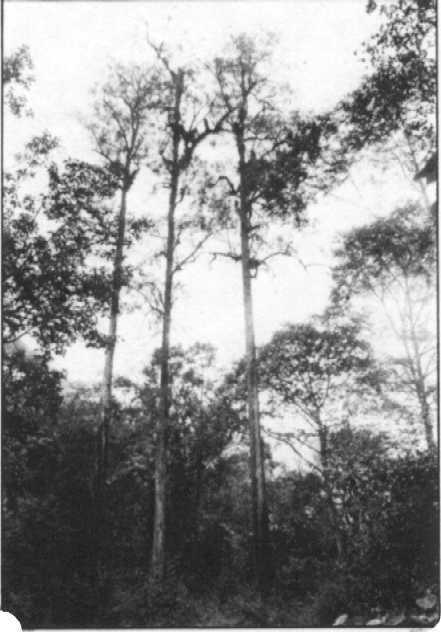 SILVICULTURE: Seed from C. junghuhniana is small with approximately 1-1.6 million seeds per kg. No special pre-treatment is needed to germinate seed. Like most casuarinars, seed probably loses viability quickly unless kept in dry, cold storage.

In Indonesia, Kenya and Tanzania all C. junghuhniana are raised from seed. In Thailand and India planting stock is raised by vegetative propagation because only male trees were originally introduced. Airlayering has been tried but with little success. The most successful method for production on a large scale was developed in Thailand. Stem cuttings of young shoots are placed in small pots filled with soil and river sand. Several pots are enclosed in polyethylene bags with tops supported by a stake. Rooting hormone (IBA) is necessary to promote rooting. The rooting process takes 3-4 weeks under 70% shade. Mahmood and Possuswam (1980) also report successful root cuttings of shoots and root suckers of this Casuarina in India.

YIELD: C. junghuhniana has the potential to grow very quickly. In irrigated plantations in Thailand it can attain 21 m height and 15 cm diameter at 5 years. Growth is normally slower without in*ation. In Markhanam, Madras, India trees reach 5 m taH at 20 months after planting (Thirawat 1953). Well-maintained plantations can produce 30-35 m3/ha/y (Boontawee and Wasuwanich 1980).

PESTS AND DISEASES: There appear to be no serious insect pests of C. junghuhniana. In East Java forests of C. junghuhniana have been attacked by caterpillars but the trees recovered even after repeated defoliations. Defoliation of
C. junghuhniana plantations by a locust (Aulaches miliaris) during rainy season has also been reported in Thailand. Young trees died but older trees suffered only a temporary setback. Also reported from Thailand was minor damage to young shoots by an insect identified as Aristobia approximator in plantations (Chittachumnonk 1983). In dry areas subterranean termites can destroy young plants by attacking their roots.