Dalbergia latifolia is a premium-quality timber species internationally known as “Indian Rosewood”. It is used to manufacture furniture, paneling, and other ornamental products. Medicines and an appetizer are made from tannins in the bark. The tree is commonly called sitsal, beete, shisham or Bombay blackwood in India, and sonokeling or sonobrits in Indonesia. 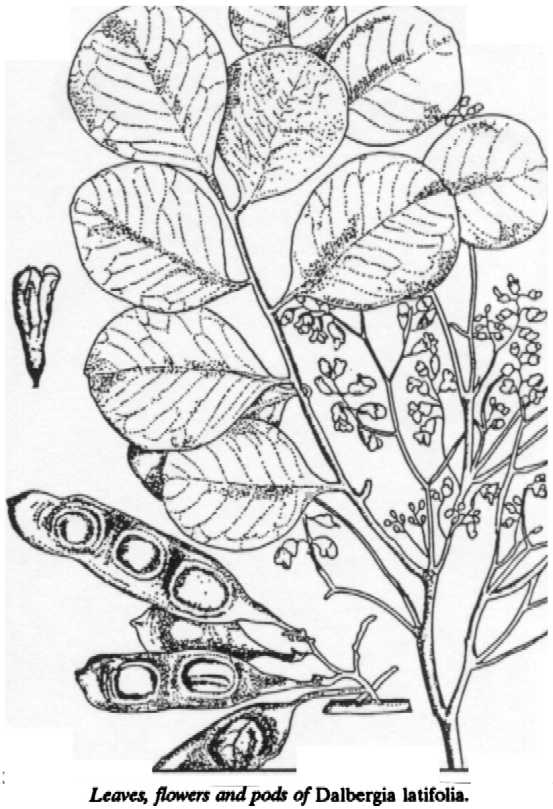 Botany
Dalbergia latifolia Roxb. (Leguminosae, subfamily Papilionoideae) is predominantly a single-stem deciduous tree with a dome shaped crown of lush green foliage. On wet sites it may remain evergreen. The trees reach a height of 20-40 meters with a girth of 1.5 – 2.0 meters (Prasad et al, 1993). Leaves are alternate, odd-pinnate with 5-7 unequal-sized leaflets originating from the same rachis. Leaflets are broadly obtuse, dark green above and pale below. Flowers are white in axillary panicles, 0.5-1.0 cm long. The brown pods are oblong-lanceolate and pointed at both ends. They contain 1-4 smooth brown seeds and do not open at maturity. The bark is grey, thin with irregular short cracks, exfoliating in fibrous longitudinal flakes (Troup, 1921; Kadambi, 1954). The root system is well developed, consisting of deep tap roots and long lateral roots. When near the soil surface, roots produce suckers.

Ecology
The annual rainfall in D. latifolia’s native habitat ranges from 750-5000 mm. As a seedling D. latifolia is shade tolerant but sensitive to drought and fire. In maturity, it is tolerant of drought and ground fire, but susceptible to crown fire. It is classified as a moderate light demander (Troup, 1921). Establishment is restricted by frost. It survives maximum temperatures of 37°-50° C, minimum temperature of 15° – 0° C, and relative humidity of 40-100 percent. Dalbergia latifolia occurs from the low plains to roughly 1500 m (Kadambi, 1954). It commonly grows with Tectona grandis, Terminalia sp., Anogeissus latifolia and bamboos.

DISTRIBUTION. The natural range of Dalbergia latifolia stretches from the sub-Himalayan tract to the southern tip of India and the island of lava in Indonesia (Kadambi, 1954). Its best growth occurs in the Western Ghat forests of Karnataka, Kerala, and Tamil Nadu. It has been introduced to Burma, Sri Lanka, Nepal, Nigeria, and Kenya (Kadambi, 1954).

USES. Wood. The sapwood of D. latifolia is pale yellowish-white often with a tinge of purple. Heartwood varies in color from light golden brown to shades of light purple with dark streaks, or deep purple with distant black lines. The heartwood darkens with age and weighs about 850 kg per cubic meter. The wood is very hard with no distinct annual rings. It is difficult to work because of its high density. The wood is fragrant and commands a high price. It is used to make premium-grade furniture, panelling, veneers, and interior and exterior joinery. Secondary uses of the wood include; knife handles, musical instrument calico-printing blocks, mathematical instruments, agricultural implements, and boats keels and screws.

Agroforestry. Dalbergia latifolia is a popular agroforestry species in Indonesia. Trees are spaced widely, 3 x I to 6 x 2 m, with intercrops of upland rice, maize, beans, or cassava during the first three years. In other systems D. latifolia is planted with mango, annona, jackfruit, and guava. When the tree canopies begin to close, shade tolerant crops, like turmeric and ginger, are underplanted (Sukandi, 1993). Farmers use the nitrogen- rich foliage of D. latifolia as a green manure and fodder.

Medicinal uses. Tannins from the bark are used to produce medicines for the treatment of diarrhoea, worms, indigestion, and leprosy. These tannins also produce an appetizer.

SILVICULTURE. Propagation. Under natural conditions, D. latifolia reproduces by seed, root sucker or coppice. Artificial reproduction is common by seed, root cutting, and stump sprout. Direct seeding is possible under moist conditions with good weed control. Root cuttings can be planted directly in the field or raised in a nursery for future transplanting.

Fresh seed germinates at 50-75% within 7-21 days of sowing. Stored in gunny sacks or earthen pots, seed remains viable for six months (Kadambi, 1954). Seed viability can be extended to 9-12 months by drying seeds to 8% moisture content and storing them in airtight containers, however, germination will decrease to 30-40%. One kilogram contains 21,000 seeds
(DITSI, 1980).

Although no seed treatment is necessary, soaking seed in cool water for 12-24 hours will hasten germination. Nursery grown seedlings are transplanted to the field after 6 months in Java (DITSI, 1980) or 12 months in India (Kadambi, 1954).

Root cuttings should be taken from trees that are at least 5 years old. Recommended length of cuttings is 20 cm with a diameter of 1-2 cm. Keep cuttings at room temperature for three days before planting them in either nursery beds or polyethylene bags (Soekeri, 1979). Eighteen cm of the cutting should be planted below the soil surface with 2 cm above. Transplant cuttings to the field after 6 months in the nursery (DMI, 1980).

Dalbergia latifolia can be quickly established by stump sprouts. Stumps are made from seedlings of seed or cutting origin. Stump roots and shoots should be 4.5 cm and 2.5-4.0 cm long, respectively. Root-collar diameter should be 0.5-1.5 cm (Deshmukh, 1975). Planting must coincide with heavy rains or survival will be low.

Management As pure stands, D. latifolia is spaced at 1.2 x 1.2 to 1.8 x 1.8 m (Deshmukh, 1975) or 2 x I to 2.5 x I m (Japing, 1936 in Kadambi, 1954). Wider spacing may produce crooked stems. For agroforestry systems spacings of 3 x I to 6 x 2 m are common (Sukandi, 1993). Trees are usually harvested in 30-40 years. In Java, to obtain 30 cm of heartwood a 50 year cutting cycle is recommended (DMI, 1980). Dalbergia latifolia is generally managed by clear felling followed by artificial regeneration. After planting or direct sowing, regular weeding is necessary until trees dominate weed competition. loosening soil around seedlings also improves growth. Weeding and soil loosening should be done before weeds become dense. The sudden removal of heavy weed growth from around seedlings may cause death from exposure (Kadambi, 1954).

Growth and Yield. Fertilization, soil moisture conservation and weed control enhance the typically slow growth of this species. In a 25 year old plantation in Purwakarta, West Java average diameter breast at height (1.30 m above the ground) was 26.1 cm and tree height 20.3 m (Sukandi, 1993). A maximum diameter growth of 3 meters has been reported in Karnataka, India (Prasad et al., 1993).

SYMBIOSIS. Dalbergia latifolia is known to be a nitrogen fixing tree. However, studies on the symbiosis of this species with Rhizobium bacteria have not been made.

TREE IMPROVEMENT. Tree improvement programs for D. latifolia should involve the selection and breeding of specimens with excellent timber/furniture characteristics. Selection of superior genotypes have been made and an experimental seed orchard established in Karnataka. In-situ conservation has been initiated at Nagarahole, Coorg, India. For more information contact the lead author.

RELATED SPECIES. Dalbergia sissoides, another endemic species to the western Ghats of India, is closely related to D. latifolia. Its wood is not distinguished from that of D. latifolia in trade; but it is stronger, harder, and lighter in color with more streaks. The wood of D. sissoides does not take as high a polish as the wood of D. latifolia, but it commands a high market price for use in premium-grade furniture and cabinets (Prasad and Shilalingadaradhya, 1988).

Kadambi, K. 1954. The silviculture of Dalbergia latifolia. Monograph of Indian trees, No. 1. Government of India, Manager of Publications, Delhi.