NFTA 92-07, December 1992
A quick guide to useful nitrogen fixing trees from around the world

Elaeagnus are temperate nitrogen fixing species commonly used for land reclamation, and as nurse crops. They are distinctive because of their peltate brownish scales which give the foliage a silvery appearance. The general appearance of the trees, leaves, and fruits are reminiscent of the olive. Hence the common names applied to the species often include the word olive (e.g. Russian olive, autumn olive). 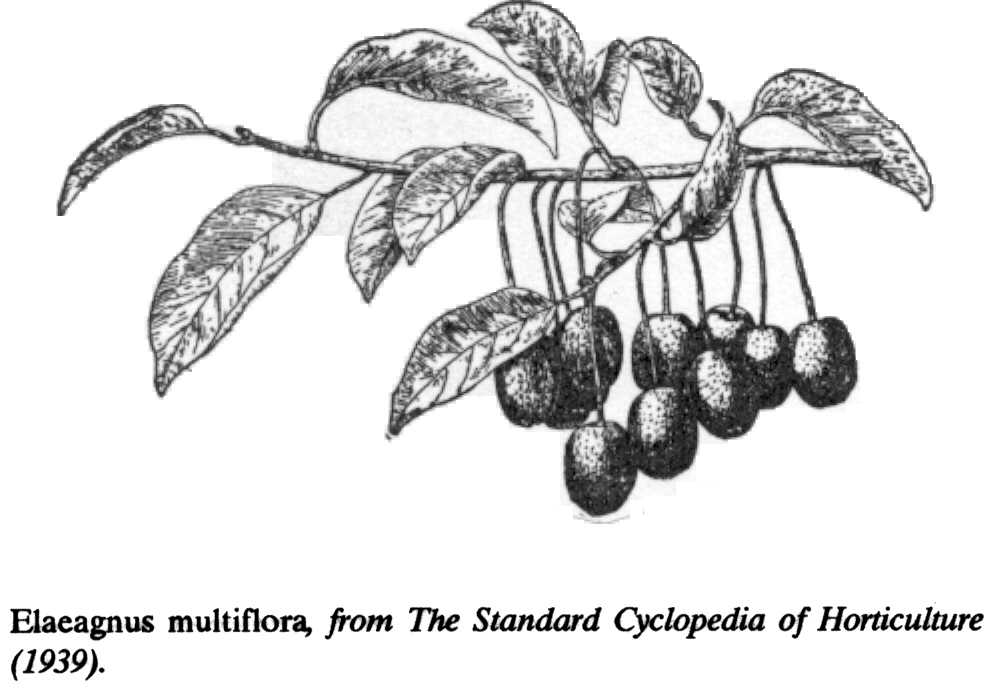 BOTANY
Elaeagnus is the major genus within the family Elaeagnaceae. Approximately 25 species have been identified as well as numerous varieties. The other two genera within the Elaeagnaceae, Hippophae and Shepherdia are also nitrogen fixing, and are very similar to Elaeagnus in general appearance and growth habits. Species of Elaeagnus may have spines, may be deciduous or evergreen, and generally never reach heights greater than 6-7 meters. Leaves are simple, alternate, and entire. Flowers are small and inconspicuous, but are commonly very fragrant. The deciduous species usually flower in the spring; the evergreen species flower in the fall. Flowers are borne in the axils of leaves.
Fruits are a drupe with a single stony seed, and are usually brightly colored and fleshy with a sweet tart taste. Fruits of E. angustifolia are creamy yellow in color and may be 1-2 cm in length, whereas those of E. umbellate are generally smaller and bright orange-red.

ECOLOGY. Elaeagnus is distributed in temperate and subtropical climates around the world. The deciduous species (E. umbellate, E. angustifolia and E. commutata) tolerate the very cold winters of the higher northern latitudes. For example, E. angustifolia survives in the high plains of Wyoming and Utah, USA where temperatures can reach -34oC. The evergreen species (E. pungens) are hardy only in moderately cool subtropical zones. Elaeagnus grows readily in almost any soil type although it thrives in calcareous soils.

Like other actinorhizal plants, they are pioneer species and prefer open sunlight. Their ability to grow well an degraded soils has made them popular for conservation and reclamation planting (Fessenden 1979). Distribution of seed by fruit-eating birds is the most common method of dissemination.

DISTRIBUTION. The native range of Elaeagnus is very wide. They occur from southern Europe through all of continental Asia. One species, Elaeagnus commit, is native to North America. Their center of origin is probably Asia. The most popular species are those originating from Japan. Human activity has made the current range worldwide.

USES. Elaeagnus species are not utilized for wood nor timber. Rather they are valued for their ability to reclaim degraded soils, and as soil-improving nurse trees (Dawson 1990). The genus makes good windbreaks. Elaeagnus angustifolia was introduced to the plain states of the western United States for this reason.

Within North America, Elaeagnus has been one of the major genera provided by government agencies for sod. conservation (Fessenden 1979). The bright red fruits of E. umbellate attract numerous songbirds, and it is desirable for increasing wildlife habitat. Most of the species also make suitable shade for animals.

The fruits of E. umbellate and E. multiflora are edible and have been used in ways similar to other small soft-fleshed fruits. Their flavor is pleasant yet tart. They are used for preparation of jams, jellies or even desserts. These foods are a favorite in Korea.

SILVICULTURE. Fruits of Elaeagnus are collected when ripe and the pulpy flesh removed by maceration. Stratification of the seed in peat moss or sand at 1-10oC for 30-90 days gives best germination of new seed. Removal of the hard seed coat, or treatment with plant hormones also overcomes seed dormancy. The seed coat contains a dormancy factor which inhibits immediate germination even when the wed imbibes moisture. There is tremendous seed size variability in all Elaeagnus species. 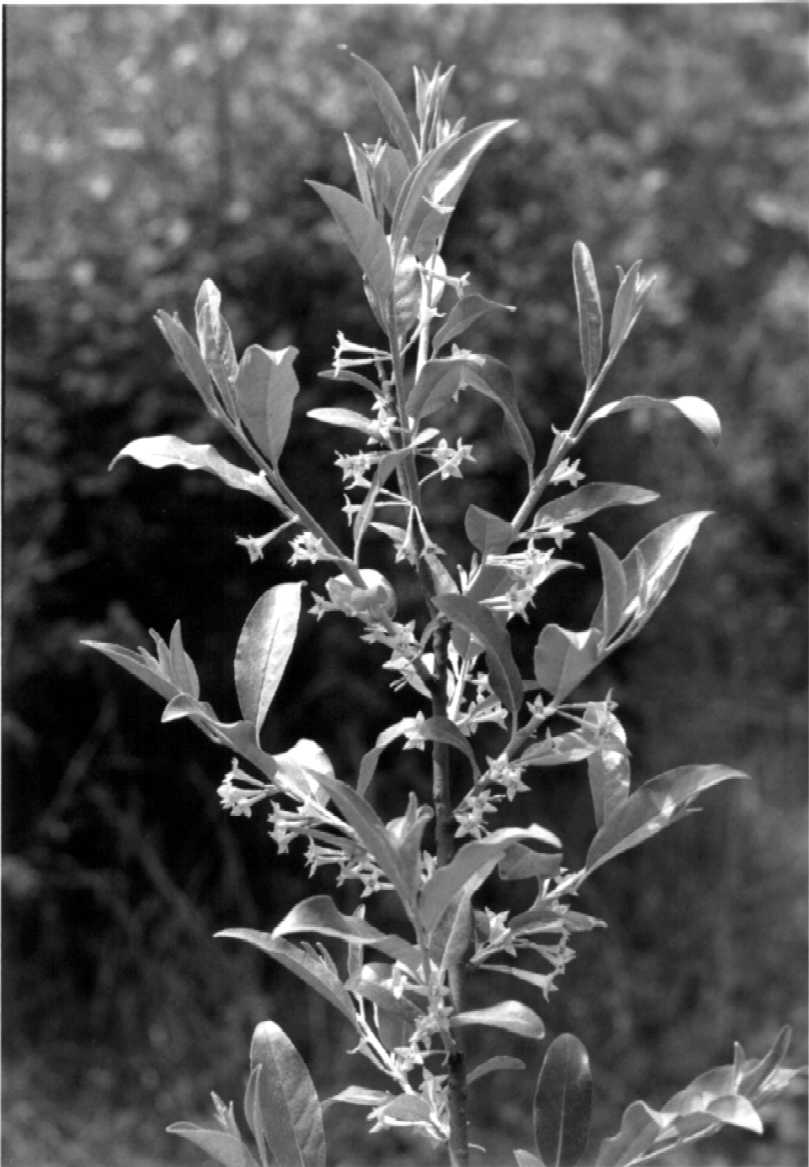 Direct seeding of Elaeagnus in the field is practical although fall planting may be required to overcome the dormancy factors (Beloit and Berry 1990). Young plants of Elaeagnus grow quickly and branch profusely. No single dominant main stem develops. If an arborescent architecture is desired, frequent pruning and training will be required. Pruning is also used to maintain plants as hedges. Elaeagnus make handsome ornamentals. When Elaeagnus are used as nurse trees for timber crops, they are usually planted in alternate rows with the main species. Because of their short stature and slower growth, they usually do not compete significantly with the main crop. When used as a nurse tree in temperate North America, Elaeagnus are competitively removed from the plantation over a period of 15-20 years (Dawson 1990). However, during the period of their growth and nitrogen fixation, they improve soil fertility, provide shading, increase moisture retention, and reduce soil-borne disease (Friedrich and Dawson 1984).

ACTINORHIZAL SYMBIOSIS. Root nodules are common and numerous on all species of Elaeagnus growing in moist soils. On semiarid sites, modulation is limited in upper soil layers but nodules will likely form well below the soil surface where moisture is available on a continuous basis. Root nodules are formed by direct penetration of young roots by the actinomycete bacterium Frankia. Root hairs are not required for infection (Miller and Baker 1985), a situation unlike most actinorhizal plants or many legume trees.

Root nodules are perennial and increase in size as the tree continues to grow. Young active nodules are snow-white in surface coloration, although older interior parts of nodules are light or dark brown and woody.

Elaeagnus is modulated by Frankia strains that also nodulate Hippophae and Shepherdia, but not by strains that colonize other actinorhizal plants such as Casuarina and Alnus. lnocula is available for Elaeagnus species, although inoculation may not be necessary since most plants spontaneously nodulate in the nursery or upon planting in the field. Unlike Rhizobium, Frankia survive in the soil for long period without the presence of host plants. However, if Elaeagnus is to be used for reclaiming severely degraded soils or mine sites, it is appropriate to inoculate in the nursery.

Estimates of nitrogen fixation by Elaeagnus species have not been carefully made, but it probably does not fix as much nitrogen as other actinorhizal species like Alnus or Casuarina. Paschke et al. (1989) estimated from nitrogen mineralization studies that Elaeagnus umbellate interplanted with Juglans nigra might contribute as much as 90 kg nitrogen per hectare per year.

LIMITATIONS. The ability of these species to grow on almost any site combined with their prolific seeding habit can make them a serious weed. Their introduction is prohibited in some places.

Beloit, L.F. and A.M. Berry. 1990. Methods for production and use of actinorhizal plants in forestry, low-maintenance landscapes, and revegetation. In: The Biology of Frankia and Actinorhizal Plants. C.R. Schwintzer and J.D. Tjepkema (eds.). Academic Press, New York. p. 281-297.

Fessenden, RJ. 1979. Use of actinorhizal plants for land reclamation and amenity planting in the USA and Canada. In: Symbiotic Nitrogen Fixation in the Management of Temperate Forests. J.C. Gordon, C.T. Wheeler, and D.A. Perry (eds.). Oregon State Univ. For. Res. Lab., Corvallis, OR. p. 403-419.