NFTA 94-02, January 1994
A quick guide to useful nitrogen fixing trees from around the world

Erythrina variegata is a showy, spreading tree legume with brilliant red blossoms. Commonly known as the ‘Indian coral tree’ in Asia or ‘tropical coral’ in the Pacific, this highly valued ornamental has been described as one of the gems of the floral world. It has also proven valuable for fodder production and as a sturdy component of windbreaks. It is a useful species for soil enrichment because it modulates readily and prolifically in both acid and alkaline soils. Farmers in India appreciate E. variegata as fodder, light timber and, more recently, pulp for the paper industry. 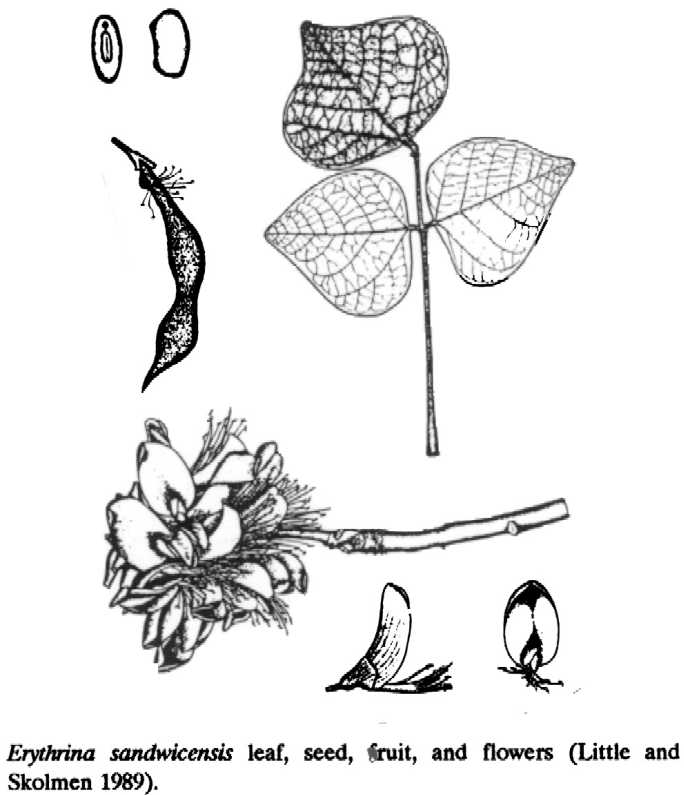 Botany
Erythrina variegata is a medium to large tree, commonly reaching 15 to 20 m in height in 20 to 25 years. It has an erect, spreading form, typically with several vertically oriented branches emerging from the lower stem. On favorable sites, the stem can reach a diameter at breast height (dbh) of 50 to 60 cm in just 15 to 20 years.

The smooth bark is streaked with vertical lines of green, buff, grey and white. Small black prickles cover the stem and branches. These become longer if the tree suffers moisture stress. They typically drop off as the girth of the stem
expands (Hegde, 1993). The leaves are trifoliate. The leaflets are commonly variegated, medium to light green, heart shaped, 7 to 12 cm wide and 12 to 18 cm long. The trees are deciduous, typically losing their leaves before flowering
except under very humid conditions.

Brilliant orange-red flowers emerge in dense, cofiioal inflorescences 5 to 7 cm long and 2 to 3 cm wide, usually after the leaves have dropped. Flowering is normally followed by a lavish production of seed. The pods are thick and black-1.5 to 2 cm wide and 15 to 20 cm long. Each contains 5 to 10 egg-shaped seeds. These are glossy brown, red or purple and
are 6 to 10 mm in diameter and 12 to 17 mm long.

A column-shaped cultivar, ‘Tropic Coral’ or ‘Tall Erythrina’, is used extensively in windbreaks and as an ornamental in parks and gardens. Through cultivation, it has spread from New Caledonia to Australia, Hawaii and southern Florida. Unlike other cultivars, the leaves of ‘Tropic Coral’ remain on the tree through flowering.

Ecology
Erythrina variegata is well adapted to the humid and semi-arid and tropics and subtropics, occurring in zones with annual rainfall of 800 to 1500 mm distributed over a five- to six- month rainy season. The species is most commonly found in warm coastal areas up to an elevation of 1500 m. The trees prefer a deep, well-drained, sandy loam, but they tolerate a wide range of soil conditions from sands to clays of pH 4.5 to 8.0. They can withstand waterlogging for up to two weeks and are fairly tolerant of fire. Erythrina variegata is bird pollinated, outcrossed and sometimes genetically incompatible.

Distribution
Erythrina variegata is native to the coast of India and Malaysia. It has been widely introduced in coastal areas of the Old World tropics, extending from East Africa and Madagascar through India, Indochina, Malaysia, northern Australia and Polynesia. The seeds can float on salt water for months, facilitating the spread of the species. Introduced to the Americas, it was so well established by 1825 that Candolle described two new species based on trees considered to be native to the New World (McClintock, 1982). It is now a very popular hedge species in southern Florida.

Uses
Support for vine crops. Farmers in India use E. variegata to support climbing plants such as betel (Piper betle), black pepper (Piper nigrum), vanilla (Vanilla planifolia) and yam (Dioscorea spp.) (Hegde, 1993). Trees established to support vines are usually planted at a spacing of 2 x 2 to 2 x 3 m. Vines are planted three to four months after establishment of the tree seedlings or during the following rainy season. During the hottest months, foliage from the closely spaced trees shades the vines and keeps them moist. When the days become cooler, the leaves fall and the vines receive more direct sunlight, which matches their requirements at this time.

Shade. Coffee and cacao growers establish E. variegata shade trees from large cuttings (2 to 3 m long and 2 to 5 cm in diameter) at a spacing of 8 x 10 m. The trees are pollarded once a year to a height of 2 to 3 m to produce a spreading crown. The pruned leaves are usually spread in the plantation as mulch. The branches may be used as fuelwood.

Windbreaks. Erythrina variegata, particularly the columnar variety, is widely used as a windbreak for soil and water con- servation. The trees have a strong, vertical root system that does not seem to compete too severely with adjacent crops (Rotar et al., 1986). Windbreaks are normally established from large cuttings planted in lines at a spacing of about 2 m.

Live fenceposts. Erythrina variegata makes excellent live fenceposts. Farmers commonly establish fenceposts from three-year-old upright branches about 15 cm in diameter and 2.5 m long. These are normally stacked in the shade in an up- right position and left to cure for one week before planting.

Fodder. The foliage of E. variegata makes an excellent feed for most livestock. Leaves normally contain 16 to 18% crude protein and have an in-vitro dry-matter digestibility of 50%. A tree of average size, pruned three or four times a year,
produces from 15 to 50 kg of green fodder annually depending on growing conditions. Trees maintained in coffee plantations benefit from associated cultivation practices they can produce up to 100 kg of fodder from one annual harvest. The leaves have no known toxicity to cattle.

Wood. The wood of E. variegata is light and soft, with a specific gravity of 0.2 to 0.3. Each shade tree in a coffee plantation can yield from 25 to 40 kg of wood from annual pollarding. The wood is used to construct floats, packing boxes, picture frames and toys, and, in India, it is increasingly used for pulp production. The timber requires careful seasoning, preferably kiln drying. It does not split on nailing, but holds nos poorly.

Medicinal. Erythrina variegata has a reputation for medicinal properties in India, China and Southeast Asia. The bark and leaves are used in many traditional medicines, including paribhadra, an Indian preparation said to destroy pathogenic parasites and relieve joint pain. Juice from the leaves is mixed with honey and ingested to kill tapeworm, roundworm and threadwonn (Hegde, 1993). Women take this juice to stimulate lactation and menstruation. It is also commonly mixed with castor oil to cure dysentery. A warrn poultice of the leaves is applied externally to relieve rheumatic joints. The bark is used as a laxative, diuretic and expectorant.

Other uses. With their rapid growth and prolific modulation, all erythrinas are a good source of organic matter for green manure. The nitrogen rich litterfall decomposes rapidly, making nutrients available for plant uptake. The dry foliage of E. variegata normally contains from 1 to 3% nitrogen Aqueous leaf extracts of E. variegata have also proven highly toxic to certain nematodes (Mohanty and Das, 1988).

Silviculture
Establishment Erythrina variegata is successfully propagated from seed or large stem cuttings. Seed should be scarified by soaking in hot water (80oC) for 10 minutes and then in tepid water overnight. Treated seeds normally germinate within 8 to 10 days. Well-watered seedlings are normally ready for planting at 10 weeks.

Woody cuttings establish best under dry conditions. They should always be held for at least 24 hours before planting to prevent attack by soil fungi. Cuttings establish quickly, producing axillary shoots in three to four weeks and then rooting. To produce tall trees with straight stems, it is important to retain the terminal bud of branch cuttings. The column shaped form, ‘Tropic Coral’, may not reproduce true to form from seed and should thus be propagated from cuttings.

Management. Erythrina variegata generally requires little maintenance. Once established, seedlings grow rapidly, usually to 3 m in one year. Cuttings typically produce more and larger side branches than seedlings; they should be pruned when young if upward growth and a clear bole are desired.

Limitations
This species is a host to the fruit piercing moth Othreis fullonia, a destructive insect pest in the Pacific region. The larvae feed on the tree and the adults ‘pierce’ important commercial fruits such as oranges, guava, papaya, banana and grapes, causing serious economic losses (Muniappan, 1993). The light wood, with 60 to 65% moisture content, is not useful as a fuel. Even when dry, it produces smoke when burned.