The African winterthorn is famous for its unusual phenology. It sheds its leaves with the rains and is green during the dry season, favoring crop production beneath its canopy and re ducing the need for a fallow period on poorer soils. 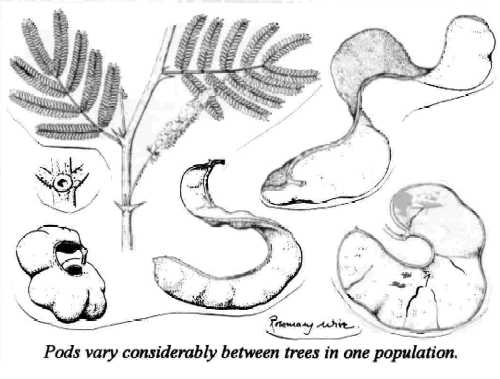 Botany
Faidherbia albida (Del.) A. Chev. (syn. Acacia albida Del.) is a monotypic genus in the legume subfamily Mimosoidae. Normally a deciduous tree to 15m it can reach 25m or more in southern Africa, with a large rounded crown and spreading branches, and trunk diameters of 1m or more. It is distin guished by its phenology, whitish twigs and paired thorns, blue green bipinnate leaves lacking a petiolar gland, but with glands between nearly all its 2-12 pinnate pairs. The inverted phenology does not occur in seedlings until their tap roots are well into the water table.

Flower buds appear soon after leaves on current season’s growth. About 100 creamy white flowers occur on spikes up to 16 cm long, but most abort and normally 5 or less mature into pods 3-4 months later (Zen-Nlo & Joly in Van Den Beldt 1992). Pods (11-30 cm long x 1.4-6.7 cm wide) are orange to reddish brown, often coiled or twisted, and contain up to 30 seeds. Seeds are dispersed by herbivores eating the indehis cent pods or by the pods floating down rivers. Populations in Cameroon show levels of outcrossing from 50-100%, with variation in a population throughout the flowering season. It is a diploid species (2n = 26) over most of its range; a poly ploid (2n = 52) has been recorded from Israel (Halevy 1971).

Distribution and Ecology
Its natural range extends throughout dry tropical Africa into the Middle East and Arabia, from 270 m below sea level in Palestine up to 2500 m in Sudan (Wickens 1969). It has been introduced into India, Pakistan, Nepal, Peru, Cyprus, Cape Verde and the Ascension Islands. It grows in a wide range of climates and habitats, either scattered or gregarious, in closed canopy woodland or open savanna and in cultivated lands. It is usually a pioneer on alluvial flats but can form part of a fire climax vegetation in the west African savannas, where optimal conditions are between 500-800 mm annual rainfall. In east Africa it grows well with 1800 to 8 mm or less, provided it taps underground water. It is susceptible to frost damage.

The species develops into large populations on deep sands and alluvia in the Sahelian belt, heavy vertisols in the Ethiopian highlands, and around many of the rift valley lakes or riverine and valley bottoms in east and southern Africa. It withstands flooding for a number of months along the Zambesi and Nile rivers and in paddy fields.

Uses
Agroforestry. The mulch created by falling leaf litter and the canopy shade at planting time creates as improved microclimate (better rainfall infiltration, reduced evapotranspiration and temperature extremes) resulting in increased crop yields (Charreau & Vidal 1965 and Poschen 1986 in CTFT 1988). Geiger et al. (in Vandenbelt 1992) argue that the fertility effect may in part be due to the tree developing on more fertile microsites rather than creating them. Animal dung and urine commonly accumulate under these shade trees.

In Zimbabwe, average leaf fall was calculated at 0.73 t/ha/yr at 11 trees/ha (Dunham 1989) compared with 0.58-0.97 t/ha/yr at 10 trees/ha in Senegal. Small leaflets rapidly decompose and increase the soil organic matter. In sandy Senegalese soils, mineralized carbon increased by 73%, and total N and available P almost doubled under the canopy com pared with open fields (Charreau & Vidal 1965 in CTFT 1988). The species is well suited to subsistence farming when the crop is a cereal (millet, sorghum and maize). Groundnuts yields can be depressed under the canopy from increased vegetative growth due to excess N in relation to P & K. Trees also integrate well in the rice paddy fields and are used as shade for coffee. Analysis of economic returns from cereal cropping under F. albida in the eastern highlands of Ethiopia showed an income gain of 82% was possible where cropping was under 65 trees/ha compared to treeless fields (Poschen
1986 in CTFT 1988).

Fodder. The nutritional value of leaves and fruit is well documented. Pods fall towards the end of the dry season when fodder is scarce; leaves and branchlets are lopped around this time. Fruit production is highly variable be tweentrees and between years. Average pod production ranges from 6 to 135 kg/tree/yr in the Sudanian zone. In Zimbabwe (Mana pools) 2 trees averaged 161 kg/tree/yr (Dunham 1990), and a single tree varied from 40-339 kg/yr. Average pod production in the Mana woodland was 590 kg/ha/yr at 11 tree/ha. The pods fall over a period of months. In west Africa pods are sometimes shaken down, collected, and fed to animals or sold in markets or at roadsides.

Trees are lopped in a number of countries for leaves and fuelwood, but this in turn affects the pod production and can extend foliage retention into the rainy season. Leaves, pods and seeds contain 200, 150 and 260 g total protein/kg of dry matter; total protein digestibility can reach 73%. Tannins limit digestibility, but incorporating pods into low quality fodder enhances ingestion without reducing digestibility. Milling the pods increases digestion of seeds.

Other uses. While the wood is used for fuel, it is lighter (specific gravity 0.6-0.7) and less suitable than many African acacias. Because of its size, the wood is locally used for dugout canoes, mortars, doors and some light carpentry but it is susceptible to borers. Cooked seeds are eaten as a human famine food both in Ghana, Nambia, Zambia and Zimbabwe. Flowering later than most plants, it is a useful source of pollen and nectar for honey bees, and log beehives are made from its bark. Widely used for local medicines, Ovambo Namibians use its bark for toothbrushes and is reputed to contain Fluorine. Thorny branches are used for fencing.

Establishment and Growth
Hard coated seeds store well under dry conditions, and are often extracted by pounding the pods in a mortar. Pretreatment is needed for rapid uniform germination. Mechanical scarification works best for small lots. Dipping seed for 5-15 minutes in conc. sulphuric acid or covering the seed with boiling water then allowing to cool for 24 hours are also effective. There are 7,000-20,000 seeds/kg, the seeds are smaller in west Africa than those from the east and south. Seeds can be sown directly or nursery planted, ideally using long poly tubes (30×8 cm), with regular watering and frequent mechanical root or air root pruning (CTFT 1988). Seedlings can be transplanted 3-6 months later. Spacing at 10×10 m is common, but varies with moisture availability and local farming traditions. Establishment in farmers’ fields affords protection and weeding as the species is vulnerable to competition. Tractor ploughing between mature trees can promote coppicing from damaged roots.

Extremely variable growth rates have been recorded because of genetic and site variation. Isozyme studies at OFI & CIRAD-Fôret indicate a large genetic diversity within the species, distributed into 3 major areas, west, southern and north eastern Africa with the latter being a key area of diversity. Larger seeded east and southern African provenances initially grow faster than the west African provenances and have a higher shoot/root ratio, but can collapse after a couple of years in the more arid west Africa where water tables are deep. 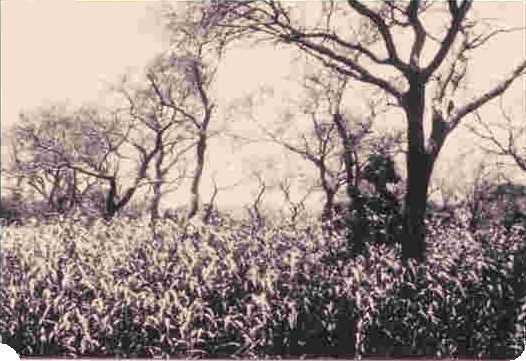 On average 1-1.5m annual height growth has been recorded on favourable sites in Africa. Clonal propagation from shoot and root cuttings and from callus has been developed although elite stock needs to be identified. Seed from a broad range of provenances is available from members of the African Acacia trials network (OFI, CIRAD-Fôret, DFSC, FAO).

Symbiosis
Faidherbia albida nodulates with Bradyrhizobium bacteria, common in tropical soils, and has VA mycorrhizal associa tions. It develops both surface and deep tap roots and in sandy Sahelian soils the highest densities of Bradyrhizobium were found at the water table 30-35 m below the surface. In moister sites abundant nodules can be found near the surface (Dupuy & Dreyfus in Van Den Beldt 1992).

Limitations
Apart from damage from foraging animals and rodents, the principal pests and diseases are insects and nematodes. Bruchid beetles can destroy up to 50% of the seeds. Seedlings are attacked by sap sucking insects or cochineal bugs, and nematodes (Meloidogyne javanica, M. icognita) favored by the moist nursery conditions. Caterpillars of the moth Crypsotidia conifera can defoliate adult trees by up to 50% in Nigeria and Zimbabwe. For control methods see CTFT (1988). Insect galls (leaf and flower) and parasitic plants occur sporadically in its native range. It is less susceptible to fungal diseases due to its inverted phenology, but leaf blight (Rhizoctonia solani) has been recorded on nursery plants in India. Felled timber is susceptible to a variety of wood borers. It is vulnerable to competition in establishment. The thorns can be deterrent to farmers not used to them.