NFTA 89-04, September 1989
A quick guide to useful nitrogen fixing trees from around the world 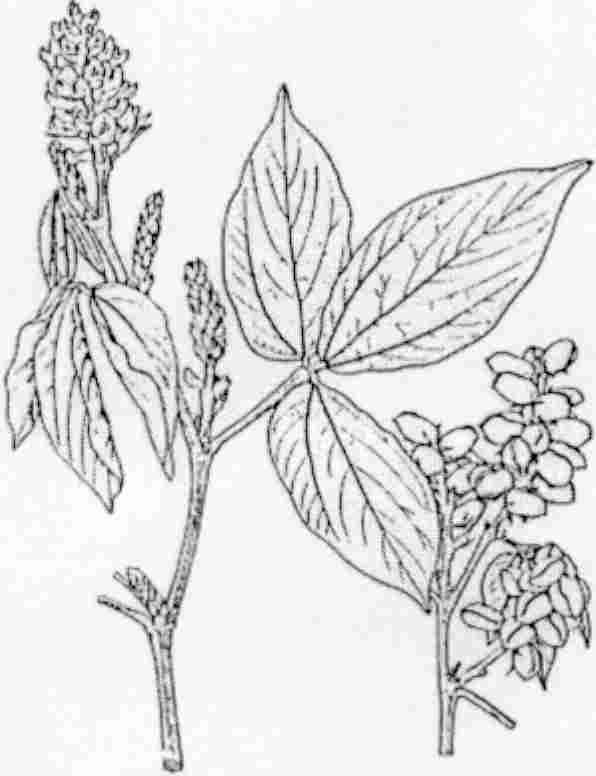 BOTANY: Flemingia macrophylla (Willd.) Merr., a member of the Papilionoideae sub-family of the Leguminosae is known under many aliases. The most important synonym is F. congesta and the genus also has been called Moghania. The authors usually cited in connection to F. macrophylla (Prain, Kuntze) have not validly published the name (Gillet. 1971). Flemingia is a woody, leguminous, deep rooting, shrub, up to 2.5 m in height. Leaves are trifoliate. Leaflets are papery, with a glabrous upper surface. Flowers are in dense racemes with greenish standards with red blotches or stripes. Pods are small and turn brown when ripening, dehiscent, generally with two shiny black seeds in the vessel. Flemingia is native to Asia, but is considered naturalized in Sub-Saharan Africa (Asare et al 1984).

ECOLOGY: F. macrophylla can be found from sea level up to 2000 m. The minimum rainfall required is about 1100 mm, while the species has been found to thrive under equatorial rainfall conditions in the Cameroons (2850 mm). Flemingia is a hardy plant that can resist long dry spells, and it is capable of surviving on very poorly drained and occasionally water-logged soils. The species is naturally found growing along watercourses in secondary forest and on both clay and lateritic soils. Keoghan (1987) reports that in Indonesia it has outstanding adaptation to acid (pH 4.6) and infertile sods with high soluble aluminum (80% saturation) 1987). It grew well in a soil with a pH of 4.5 in Costa Rica (Bazill 1987). The plant is tolerant of light shade and is moderately able to survive fires.

WEED CONTROL: Probably the most interesting feature of the species is the relative resistance of its leaves to decomposition. Approximately 40% of a mulch layer made of flemingia leaves (4 tons DM per hectare), was still left after 7 weeks, compared to 20% for Leucaena leucocephala (Budelman, unpublished). The flemingia mulch formed a relatively solid layer that effectively prevented germination of weed seeds and/or stunted their early development for 100 days.

In experimental rubber plantations in Ghana, a flemingia mulch reduced the number of required weedings per year from six to two (Anon. 1964). Temperatures at a soil depth of 10 cm were 7-8 C lower in a mulched plot (5000 kg DM per ha) than under bare soil. Soil moisture under a flemingia mulch has been shown to be significantly higher than under mulches of Gliricidia sepium and Leucaena leucocephala.

An alley farming trial in Nigeria compared the ability of fallows and mulches of flemingia, Cassia siamea and Gliricidia sepium to control weeds. The trees/shrubs were not cut during a 2-year establishment period. In a 120-day test of the decomposition rate of foliage from the first cutbacks from these hedges, cassia lost 46% of its dry matter, flemingia 58%, and gliricidia 96% (Yamoah et al. 1986a). For later prunings over two maize cropping seasons, gliricidia prunings decayed completely in a 120-day period, cassia lost 85%, and flemingia 73%. However, cassia showed the greatest potential for controlling weeds during both the 2-year fallow and the two maize crops, primarily because of the greater shade cast by its canopy during the establishment period.

BIOMASS PRODUCTION: At 10,000 plants per hectare, flemingia produced a yearly average of 12.4 tons of leaf DM over 4 quarterly cutting intervals.

FODDER VALUE: Flemingia appears to have some value as a dry season browse (Skerman 1977), although its digestibility value is less than 40% (Brewbaker and Glover 1987). Palatability of immature herbage is considerably better than that of old, mature, herbage (Keoghan 1987). Reported crude protein values range from 17.9% (Laquihon, pers. comm.) and 14.5 to 183% (Asare 1985). A 14-week cutting interval and 35-cm cutting height produced the highest leaf DM yield in a fodder production trial in Ghana (Asare 1985). Increasing the cutting interval from 12@14 weeks decreased crude protein contents, however (Asare 1985).

A qualitative evaluation trial in a pine plantation in Costa Rica indicated that flemingia was one of several species worthy of further study as a shade tolerant forage legume for silvopastures (Bazill 1987). Shrubby legumes were considered especially useful toward the end of the tree rotation, when densely shaded grasses and herbaceous legumes are not vigorous enough to overcome grazing and trampling.

Skerman (1977) reports that flemingia with centrosema was selected as the most promising for mixing with grasses for temporary pastures on arable land in Ghana, and that in Malaysia it is used to support creeping legumes. 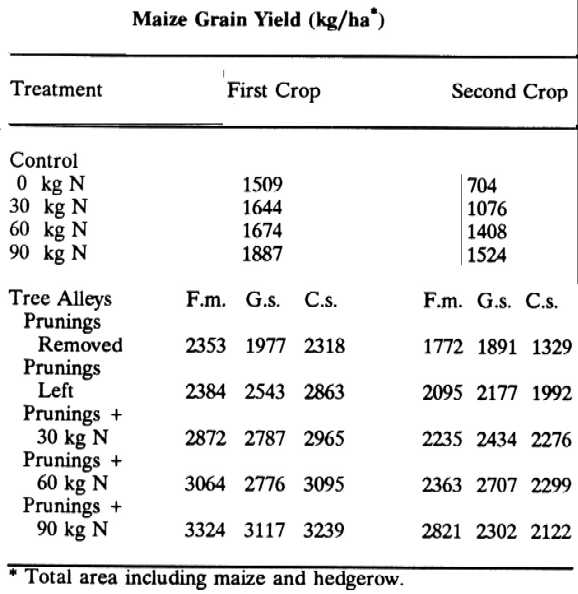 OTHER USES: Although much of flemingia’s biomass is not woody, fuelwood can be a secondary product. A 2-year-old stand with a spacing of 0.5 x 4 m produced 6.8 tons of dry woody stems/ha in Nigeria (Yamoah et al 1986b). The shrub is used in India as a host plant to the Lac insect, and is sometimes intercropped with food crops during its establishment period (Purkayastha et al. 1981). Glandular hairs from dried pods yield a powder that imparts a brilliant orange color to silks (Allen and Allen 1981). Hill tribes in India use the roots in external applications against ulcers and swellings (Bennet 1978). ‘ne species has been used a covercrop for coffee in the Ivory Coast and Cameroon, sisal plantations in Tanzania, cocoa plantations in Ghana and the Ivory Coast (experimental stations), and rubber in Sri Lanka and Malaysia.

ESTABLISHMENT: There are 45,000 to 97,000 seeds per kg. Tests at NFTA indicate that the standard hot water treatment ensures the best germination. Chandrasekera (1980) found that treatment in concentrated sulfuric acid for 15 minutes provided better germination than hot water. Young plants grow slowly and need care (weed control) during the first two to three months. NFTA has limited quantities of seed available for trials.

PESTS AND PROBLEMS: Flemingia is an off-season host for the podfly, Melanagromyza obtusa, an important pest of pigeonpea, especially in central and northern India (IPN 1985).

NOTE TO READERS: Flemingia macrophylla is a relatively unstudied species just beginning to be tested and used in many areas. Much remains unknown about its environmental requirements, uses and management. Anyone working with this species is urged to contribute information that could be included in a later edition of this NFT HIGHLIGHT or NFTRR.

Asare, E.O. 1985. Effects of frequency and height of defoliation on forage yield and crude protein content of Flemingia macrophylla. In Proceedings of the XV International Grassland Congress, August 24-31, 1985, Kyoto, Japan.