NFTA 90-07,
December 1990
A quick guide to useful nitrogen fixing trees from around the world 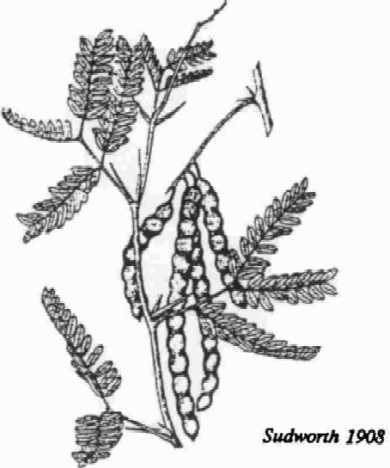 Botany.
Mesquite has spiny branches and leaves with 7-18 sets of paired leaflets. Its seed pod resembles the common pea or bean, 10-30 cm long and 5-10 mm diameter. The flower is a yellow inflorescence with many spikes. Hybridization is common and the taxonomy of mesquite is difficult (Hilu et al. 1982). Genetic variability is high with good potential for selection of individuals and ecotypes and plant breeding. The trees are self-fertile.

Ecology.
Honey mesquite will grow in a wide range of soils and is moderately salt and frost tolerant. It thrives under very high temperatures (> 38oC) and survives in areas with very low precipitation ( < 2M mm annually), but it is usually found in areas with groundwater reserves. This tree has been found to occur in Death Valley with only 50 mm annual rainfall (Hilu et al. 1982). In its drier, western range it occurs along streams and in low-lying areas; in areas with more rainfall it occurs on open range or in chaparral. Uses.
Food: Honey mesquite pods were a primary food of the residents of the SW North American deserts (Felger 1977). Pods are quite sweet and whole pod composition is 80% carbohydrate, 13% protein, 25% fiber, and 3% fat (Zolfaghari et al. 1982). The pods are easy to collect and store and, unlike most beans, are edible without cooking. Mesquite pods are still used as a food and beverage in Mexico. Processing and use is described in Meyer 1984 and Meyer et al. 1986. Pods could prove useful for production of flour, wine, tempe, and tofu products. R.S. Felger has proposed that the pods of this dryland-adapted tree will one day become as important as corn, rice, and wheat to the world food system. Bees favor the flowers, and mesquite honey is highly valued for its flavor.

Fodder: Grinding improves the use of honey mesquite pods for fodder. Sheep, goats and pigs are able to use a higher percentage of mesquite pods in their diet than are cattle and horses. In 1965, 40,000 tons of pods were used as feed in Mexico (Lorence 1970). Leaves of mature honey mesquite are browsed by cattle only on deteriorated rangeland.
Fuel: Mesquite wood (17,000 BTU/kg), chips, and charcoal are excellent fuels, and the wood smoke lends a pleasant flavor to cooked foods. Annual production on dry, low quality sites may be < I t/ha, but with sufficient water (even though slightly saline) trees can grow rapidly and yield > 5 t/ha/yr (Felker et al. 1983).

Hardwood: Mesquite wood is very dense, specific gravity 0.7+, and has very balanced shrinkage on drying (Rodgers 1986). These properties make it excellent for woodworking. Mesquite is also used for fencing.
Other products: Mesquite has been used for a variety of medicinal purposes, including lice control treatment of sore throat and treatment of skin sores and ulcers (Felger 1977). Mesquite produces quality gums which may be economically valuable (Meyer 1984).

Other products: Mesquite has been used for a variety of medicinal purposes, including lice control treatment of sore throat and treatment of skin sores and ulcers (Felger 1977). Mesquite produces quality gums which may be economically valuable (Meyer 1984).

Soil improvement:
The refinement of a modern management system of intercropping with mesquite based on traditional practices (Lawton and Bean 1968) should receive high priority. The deeply-rooted, open-canopied trees may provide little competition for field crops and can fix 30-40 kg N/ha with 30% canopy cover (Jarrell et at. 1982). Soils under honey mesquite are enriched with nitrogen (Abrams et al. 1990). Mesquite may be established as tree crops for alley cropping, windbreaks, or timber belts.

Propagation.
Mesquite pods ripen simultaneously. They should be picked when the seed rattles in the pod, and stored in a dry place. Bruchid beetles can be killed by freezing or fumigating the pods. Mesquite seeds store well maintaining excellent viability for years or even decades. There are about 30,000 seeds/kg. A modified commercial meat grinder with a plate with holes I cm in diameter is recommended for cleaning. The seeds have a very tough coating which must be scarified for germination by chipping or cutting, acid treatment, or exposure to boiling water. Acid, however, will damage seeds if cuts in the seed coat are made by mechanical cleaning. Seeds germinate best at temperatures between 20-40oC and can germinate within six hours of wetting at 34oC (Bainbridge and Virginia 1989). Preliminary studies of honey mesquite propagation from cuttings, tissue culture, and air layering suggest that these vegetative reproduction techniques are possible (Bainbridge and Virginia 1989).

Scarified or sprouted seed should be planted in a well drained soil mix If small containers are used, transplant seedlings 2-3 weeks after germination to avoid disturbing the dominant tap root. Young seedlings can have root to shoot ratios as high as 10:1 (Mooney et al. 1977). Larger transplants can be grown in deep containers (7.5 cm wide by 100 cm deep) or in plant bands
(4 cm x 40 cm).

Silviculture.
Although mesquite is very drought tolerant best growth is achieved in areas where the root system can reach groundwater. In areas with low rainfall especially in fast-draining soils, irrigation may be required during establishment. Buried clay pot and deep pipe irrigation have considerable potential for establishing mesquite in hot desert regions (Bainbridge and Virginia 1989). Soils with compacted or hard pan layers should be deep ripped or worked with an auger to 1-3 m and planting strips cleared of competing vegetation. Direct seeding is also possible, if adequate soil moisture can be maintained for germination.

Root symbioses.
Mesquite forms symbioses with rhizobia and VA mycorrhizae. The active root nodules can occur many meters deep (Virginia et al. 1984,1986; Jenkins et al. 1989). Nitrogen levels in the soil under plantation-grown mesquite were much higher than same-aged P. chilensis or P. alba (Abrams et al. 1990). Seedling rhizobial inoculation can be done with a liquid culture, clay or peat based inoculum, or with small amounts of soil from the active root zone under healthy, established trees nearby (Bainbridge and Virginia 1989). Fertilizer (especially phosphorus) may increase mesquite growth on poor soils, but both P and N can depress microbial symbionts and fertilization may be detrimental in the long term.

Pests and Problems.
Pods are commonly damaged by bruchid beetles. Mesquite hosts mistletoe and infection may be extensive on older trees. Trees rarely suffer significantly from other diseases and pests, although psyllids may be a problem in some areas, and spider mites have been a problem in glasshouse studies. When planted in southern Texas, var. torreyana from California, but not var. glandulosa, is subject to stem fungal diseases (P. Felker, pers. comm. 1990). Fencing or seedling protectors will usually be needed to protect young, transplanted mesquite seedlings from rabbits or other grazing animals. To ensure good tree form, the leader should be protected against grazing. As with other Prosopis species, mesquite can become a serious invader on disturbed lands or overgrazed rangelands.