NFTA 90-01, May 1990
A quick guide to useful nitrogen fixing trees from around the world

In the early years of its planting, leucaenas were often called ‘miracle trees” for their success as fast-growing, multipurpose, nitrogen fixing trees in the tropics. Several leucaena species are characterized by rapid growth, are highly palatable to animals, and produce dense firewood. Today, a more balanced view exists of this versatile group of trees. A major pest, the psyllid, has infested leucaena stands around the world with particular susceptibility expressed by varieties of Leucaena leucocephala. Research, however, has identified psyllid-tolerant varieties and hybrids, and psyllid populations in leucaena stands are declining over time, apparently due to natural agents. 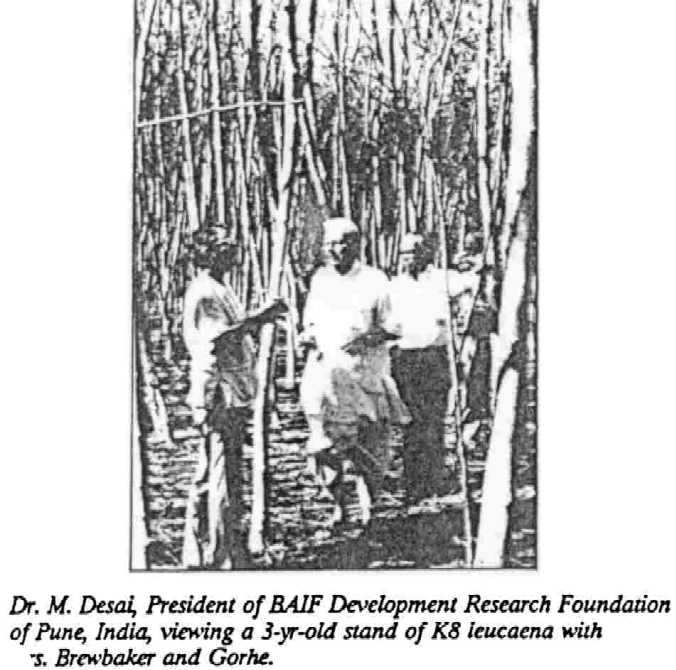 Leucaenas vary widely in leaf and tree shape, ranging from shrubs to stately trees. Leaves are alternate and bipianately compound. Flowers range from bright yellow (RETU, GREG) and pink (DIVE, PALL) to white (all others). Clustered vertical brown pods, 8-25 cm in length, are a distinguishing mark. LEUC and tetraploid varieties of DIVE are self-pollinating, while all others are outcrossing.

COMMON NAMES: Few countries lack their own names for Leucaena. ‘Guaje” in Latin America, “subabul” or ‘kubabul’ in India, “ipil-ipil” in Philippines, “lamtoro” in Indonesia and “yin hue whan” in China are among those better known. The Hawaiians named it “koa haole’ the “foreign koa” (the native Hawaiian koa is Acacia koa), and leucaena varieties developed in Hawaii are named K8, K636, etc., “K” for koa.

ECOLOGY: The species range naturally from Peru (TRIC) to Texas (RETU), from sea level to over 2000 m elevation, and in areas with annual rainfalls between 500 and 2000 mm. Leucaenas are associated with soils of pH 5-8, and are not found on waterlogged soils. The leucaenas fail on highly acid soils, where aluminum completes with calcium and other cations for exchange sites in the soils.

GENETIC IMPROVEMENT: The genus is considered an interbreeding complex, and breeding efforts are concentrated on producing interspecific hybrids. LEUC has been crossed successfully with all other species except GREG. Over 50 species hybrids are now under study in Hawaii for growth, form, psyllid resistance, cold tolerance and fodder quality. Many hybrids have high commercial potential notably in cooler climates and on certain acid soils where LEUC is an economic failure. New varieties are increasingly available from breeding programs in Hawaii, Australia, Taiwan and Indonesia.

ESTABLISHMENT: Depending on species, leucaenas have 10-80,000 seeds/kg. Leucaena seeds have hard coats that need pretreatment to enhance germination. Seeds can be mechanically scarified, either by nicking the seed coat or treating with boiled water. Leucaena can be direct seeded or planted as container grown seedlings, stump cuttings or bare root seedlings. In, areas where they have not grown before, leucaenas require inoculation with specific Rhizobium in order to nodulate and grow well.

USES:
Wood. Under suitable conditions, leucaenas have produced wood yields similar to the best of
tropical trees. Mean annual wood increments fall in the range of 20-60 m3/yr in short rotation (3-5 yr) trials. Wood of a 4-yr-old tree has about 46% moisture and a specific gravity of 0.52. This medium hard wood serves well for posts, house-building, utensils and parquet flooring. It is an excellent pulpwood (Hu 1987), and a preferred fuelwood that burns with little smoke or ash. Charcoal is of high yield and quality.

Fodder. Leucaena is perhaps best known as a fodder plant for ruminant animals, with high acceptability and dry matter digestibility (55-70%). Some of the newer species undergoing testing (DIVE-, PALL) may have lower digestibilities. Goats and cattle make superior gains on grass supplemented with 20-30% leucaena, which cm be fed solely when necessary.

Mimosine is a toxic amino acid in leucaena foliage (2-6% dry matter) that causes hair loss and other damage in non-ruminant animals. A breakdown product of mimosine, DHP, can cause problems in ruminant animals. A bacterium found in the gut of ruminants in areas where LEUC is native or naturalized can detoxify DHP. The bacteria can now be obtained from Australian scientists at CSTRO and used for rumen inoculation. Leucaena can be used to color the egg
yolks of poultry, due to its high content of vitamin A precursor carotenoids. However, it is not a nutritional supplement to poultry without pre-preparation.

Alley farming, shade and species mixtures. The leucaenas have been model trees for alley farming, a system in which trees are planted in crop fields and managed as bedgerows. Crops grown in the ‘alleys’ formed by the trees benefit from the nitrogen-rich leucaena leaves applied as green manure. Fresh litter has higher nitrogen (3-4%) than dried leaves (1%). Leucaenas coppice readily-, best results are realized from cutting heights of 50 cm or above. The leaves defoliate from cut branches and wilt rapidly after harvest. Leucaena has soil and rainfall preferences similar to most annual food crops, making a good hedge for maize, sorghum, cassava and the taller grain legumes (Kang et al. 1984).

Leucaena is used to shade crop plants such as coffee and cacao in Indonesia and Costa Rica. It has also been planted in species mixtures in tree plantations in Brazil and Hawaii to increase wood production of nonfixing species such as Eucalyptus (Schubert et al. 1988).

Foods, gums and other products. Green pods of several leucaenas (ESCU, MACR, LEUC) are marketed for food in Mexico, but little eaten elsewhere. Tender young vegetative shoots are often sold as a vegetable in S. E. Asia. Seeds are made into tempeh in Indonesia. More should be known of the goiter-causing DHP before food uses are widely recommended. Gums
from leucaena bark have been the subject of extensive study for their similarity to gum arabic; gum yields appear high in certain species hybrids. The seed gum of leucaena is also a unique galactomannan with potential medical uses. The production of liquid protein extracts from leucaena leaves is, however, complicated by gum- precipitation problems.

THE LEUCAENA PSYLLID: Heteropsylla cubana Crawford is a tiny jumping plant louse that attacks leucaenas. It is the subject of a previous NFT Highlight (SM5). The psyllid is travelling around the tropics from its home in Latin America, where it does EMW significant damage to LEUC, probably from control the psyuid by native insect predators. Useful predators being deployed abroad include the beetle Curinus coeruleus and the parasitic wasp Psyllaephagus nr. rotundiformis.

Management practices influence psyllid resistance. In some species, repeated cuttings can result in higher damage to juvenile leaves; weather patterns can also affect the degree of damage. Species exhibiting a relatively higher degree of resistance to psyllid damage than LEUC include COLL, DIVE, ESCU, GREG, PALL, RETU and SALV. Interspecific hybrids such as KX1 and KX2 have shown high psyllid resistance in Asia and the Pacific.

Pound, B. and L.M. Cairo. 1983. Leucaena: Its cultivation and use. Overseas Development Administration, London.