NFTA 92-05, October 1992
A quick guide to useful nitrogen fixing trees from around the world

Leucaena diversifolia is the second-best known species in the genus Leucaena. Through numerous international tree trials, it has gained a reputation for aggressive growth at cool or high elevation sites where L. leucocephala performs poorly. It is a common companion tree to coffee in much of Indonesia and Mexico. L. diversifolia has moderate or high resistance to both psyllids and seed beetles, and is low in mimosine. Its forage digestibility is somewhat lower than L. leucocephala. It produces straight boles, and is desirable for paper and charcoal production. 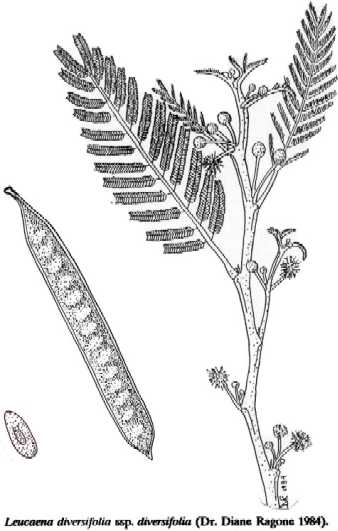 Botany
L. diversifolia (Schlecht.) Bentham (Leguminosae, subfamily Mimosoideae) is a medium- sized tree, often growing 10 to 20 m in height and 10 to 40 cm in diameter. L. diversifolia typically grows as a single stem tree with a long straight bole and slender uplifted branches that terminate in horizontal twigs. Some diploids produce branches at 180 degrees to each other, giving the trees a planar or two-dimensional appearance.

The leaves of L. diversifolia are easily distinguished from L. leucocephala by high numbers of small leaflets. The leaflets are 1 to 2 mm wide and nearly 1 cm long. The apex of the leaflet is usually off-center and pointed. Flower heads are borne in clusters at leaf axils and average under 1 cm diameter (0.5-1.8 cm) on the day before flowering. Unlike L. leucocephala flowers, the styles of L. diversifolia extend past the anther halo. Flowering is profuse, beginning in late spring and continuing until mid-fall. Flower color ranges from bright red to light pink. Young pods can turn bright red in the sun, accounting for the Mexican name ‘guaje rojo” or red leucaena (Brewbaker 1987b).

DIV4 pods mature in about 90 days, while those of DIV2 mature in 80 to 160 days. L. diversifolia seed weigh about one third (about 20 seeds/gram) of L. leucocephala seed. Seeds of the DIV2 are commonly smaller than those of DIV4.

L. diversifolia is not frost tolerant. Early indications suggest that L. diversifolia is drought-sensitive. It performs best on fertile (maize-growing) soils, but also colonizes infertile ones. The species is not normally found on acid soils but some can tolerate moderate acidity (Hutton 1984). Some diploids have been discovered growing among pines near Siguatepeque, Honduras. The species does not appear to be tolerant of saline or sodic soils. It tolerates partial shade and seasonally heavy rain.

DISTRIBUTION. The native distribution extends from Eastern and Central Mexico (Veracruz and Puebla) south through Guatemala, Honduras and into Nicaragua. The tetraploid is native only in a small region of central Veracruz, Mexico near Jalapa. No diploids grow in this area, although they probably occur in southern Veracruz. The center of diversity of the diploids is Guatemala. Oaxacan (Mexico) diploids are different in tree form (shrubby), pollen (large) and pubescence (heavier) from their Guatemalan kin, and may withstand periodic drought.

The naturalized distribution of the species includes the Caribbean, Africa and S.E. Asia. The tetraploid was probably established in Jamaica early in this century. Diploids (probably Guatemalan) were brought into the Ivory Coast, Cameroon and Java, Indonesia in the late 1800s. The Indonesian populations appear to be agronomically superior and may be partially inbred; if so they could be invaluable in hybrid seed production.

Forage. In one study, foliar digestibility of L. diversifolia lines were 10-20% less than that of L. leucocephala. The higher tannin content of the foliage may increase bypass protein levels in ruminants. Bypass protein is important to ruminants because the protein is protected from degradation in the rumen, but available for absorption in the small intestine, which is metabolically efficient. Mimosine content (1.5-2.5%) is about half that of L. leucocephala (4%). Levels of more than 50% of the forage in animal diets are not recommended.

SILVICULTURE. Seed can be scarified by, a 5-7 minute soak in concentrated sulfuric acid, a 3 minute soak in 75oC hot water, or mechanical scarification. L. diversifolia fixes nitrogen with Rhizobium, and has a specificity comparable to that of L. leucocephala. Little is known about its mycorrhizal needs; these are also assumed to be comparable to that of L. leucocephala.

Seedling vigor of L. diversifolia is poor, especially of the tetraploids and small-seeded diploids (Sorensson et al. in submission). Seeds may take a week to fully germinate, and early growth rates are half that of more vigorous leucaenas. Seedlings are typically transplanted into the field eight to twelve weeks after germination, when they should be 15 to 30 cm tall. Vegetative propagation from cuttings and grafts has generally failed although tissue culture is successful.

PESTS & DISEASES. L. diversifolia are generally resistant to insect pests in the field. Tetraploids show moderate psyllid resistance, but defoliate during heavy pest outbreaks (Brewbaker 1987a, Bray and Woodroffe 1988). Some diploids are extremely resistant to psyllids.

Both tetraploids and diploids show high resistance to seed beetles Araecerus levipennis and A. fasciculatus (Braza 1988). Damage to unprotected seed from A. levipennis in Hawaii is often one-quarter that to seed of other susceptible leucaenas.

HYBRIDS. Most interspecific combinations between and within L. diversifolia and other species are successful (Pan 1985, Sorensson and Brewbaker in submission). The best known hybrid is that between tetraploid L. diversifolia and
L. leucocephala. It is called ‘KX3’. It has a broader genetic base than either parent and often outyields them. Like the parents, the hybrid is self-fertile and seedy.

Bray, RA. and T.D. Woodroffe. 1988. Resistance of some Leucaena species to the leucaena psyuid. Tropical Grasslands 22:11-16.

Brewbaker, J.L. 1987b. Guide to the systematics of the genus Leucaena (Mimosoideae). Lucaena Research Reports 7(2):6-20.