Leucaena Psyllids – A Review of the Problem and its Solutions

Psyllids have caused severe damage since late 1982 to Leucaena in tropical and subtropical areas outside their native range in the Americas. Many farmers, especially in parts of South and Southeast Asia, have been particularly hurt by these “jumping plant lice” that have defoliated their fodder and green manure trees. More damage is expected as these psyllids spread around the world. However, components of an Integrated Pest Management Program – genetic resistance and biological control – are rapidly being developed and indicate that the psyllid problem is surmountable. 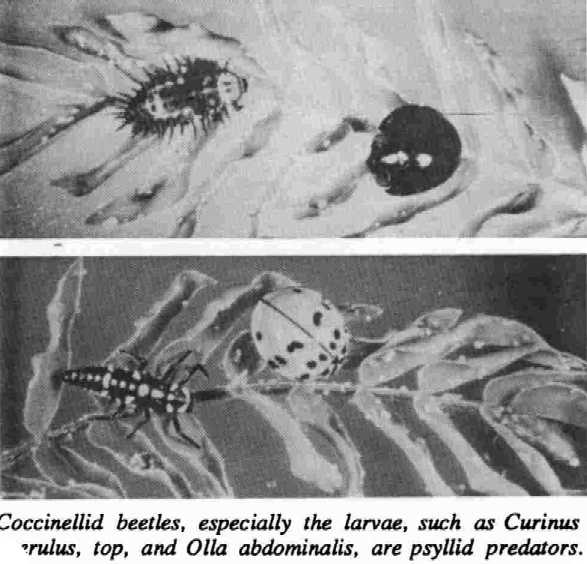 PSYLLID IDENTIFICATION: Leucaena psyllids, Heteropsylla cubana Crawford, are tiny insects (1-2 mm) in the family Psyllidae (Homoptera). Eggs are yellow, found primarily on young terminal leaves, and hatch in 2 to 3 days. Nymphs, which resemble aphids, undergo five instars over eight to nine days. Adults are two to dime times the size of the largest nymphal instar. Their reported color has ranged from green to brown to whitish. They use stout legs to jump before taking flight when disturbed. Females begin laying eggs 1 to 3 days after becoming adults.

PSYLLID DISTRIBUTION: The Leucaena psyllid is native to the Caribbean, Mexico and Central and South America. Moving as uninvited passengers on aircraft or in high altitude winds, they arrived in Hawaii in 1984. By 1986, they were reported in Australia, the Pacific Islands and Southeast Asia (Thailand, Malaysia, Indonesia, Philippines). In 1987 they arrived in Sri Lanka, making their way to Burma, China and India in 1988. They undoubtedly will move into Africa.

DAMAGE: Psyllid damage is greatest when juvenile foliage development is rapid, as on hedges managed for green manure and/or fodder. Nymphs cause the primary damage by sucking sap from young foliage. Leaflets turn yellow, curl, and wilt. The deposition of honeydew encourages the growth of sooty molds. Complete defoliation of terminal shoots can occur under heavy psyllid infestation. Trees usually survive unless they are subject to other severe stresses, such as a drought. Damage usually has been the most severe just after the psyllids invade an area. Trees were almost bare in Hawaii during the first year of attack, which coincided with a severe drought. Defoliation has occurred rather cyclically since then.

POPULATION DYNAMICS: Psyllid population trends tend to vary from site to site, and seem to depend on a complex set of interactions between leucaena growth, weather (particularly moisture), psyllid mortality factors, and other influences. In a study of two sites in the Philippines, psyllid populations built up during the rainy season, but leucaena usually outgrew whatever damage occurred (Villacarlos et al. 1988). When leaf growth slowed in the dry season, the already high psyllid populations caused the most severe damage. Psyllid populations dropped to very low levels at the end of the dry period due to the lack growing young shoots. Psyllid population fluctuations and damage were much more severe at the site with a more pronounced dry season. Entomogenous fungi, which require moist conditions, apparently helped keep psyllid populations in check at the wetter site.

In Australia, the number of adults rapidly built up from almost none to large numbers within three to four days of rain (Bray and Woodroffe 1988). Adults had either been present on the lower leaves, migrated from leucaena in the surrounding area, or traveled from more remote stands. The most important environmental factor for this build-up appeared to be moisture and its effect on plant growth. Without actively growing young shoots to feed on, damaging levels of psyllids could not arise.

From July 1987 through June 1988 in Hawaii, three major defoliations occurred in a psyllid trial (Wheeler 1988). Correlations between psyllid numbers and temperature and rainfall were very low, but a higher correlation was found with rainfall. The build-ups in psyllid populations took approximately two weeks. The first indications were greater numbers of eggs on juvenile leaves, followed by higher numbers of nymphs and adults, and then defoliation.

GENETIC CONTROL: The psyllid outbreak emphasizes the importance of a diversified genetic base to reduce the impact of pest infestations. Some people have developed the unwarranted belief, however, that leucaena should no longer be used. The psyllid epidemic has been caused primarily by excessive use of only one genotype of Leucaena leucocephala. This diverse genus has a large degree of variability in form, growth and psyllid resistance, and it still has much to offer.

The international Leucaena Psyllid Trial Network organized by NFTA has identified germplasm that is resistant under fodder management (Glover 1988, Wheeler 1988). L. pallida showed the highest psyllid resistance followed by the hybrids KX1 (L. pailida x L. diversifolia) and KX2 (L. pallida x L. leucocephala) and L. diversifolia (K784 & K785). Leucaena diversifolia (KI56) and the hybrid KX3 (L. diversifolia x L. leucocephala) showed resistance at some sites and susceptibility at others. The giant L. leucocephala varieties managed for fodder production were heavily damaged at all sites when psyllid populations were high. L. leucocephala K636 performed better than the other L. leucocephala varieties because of its ability to recover faster from psyllid damage. New hybrids are being developed at the University of Hawaii in collaboration with NFTA. New leucaena plantings should involve a number of tolerant or resistant varieties.

OPTIONAL TREES: Calliandra, Gliricidia and Sesbania spp. are among the attractive local and exotic alternatives to leucaena (IDRC 1988). Since all species have insect pests, overuse of any particular genotype should be avoided. 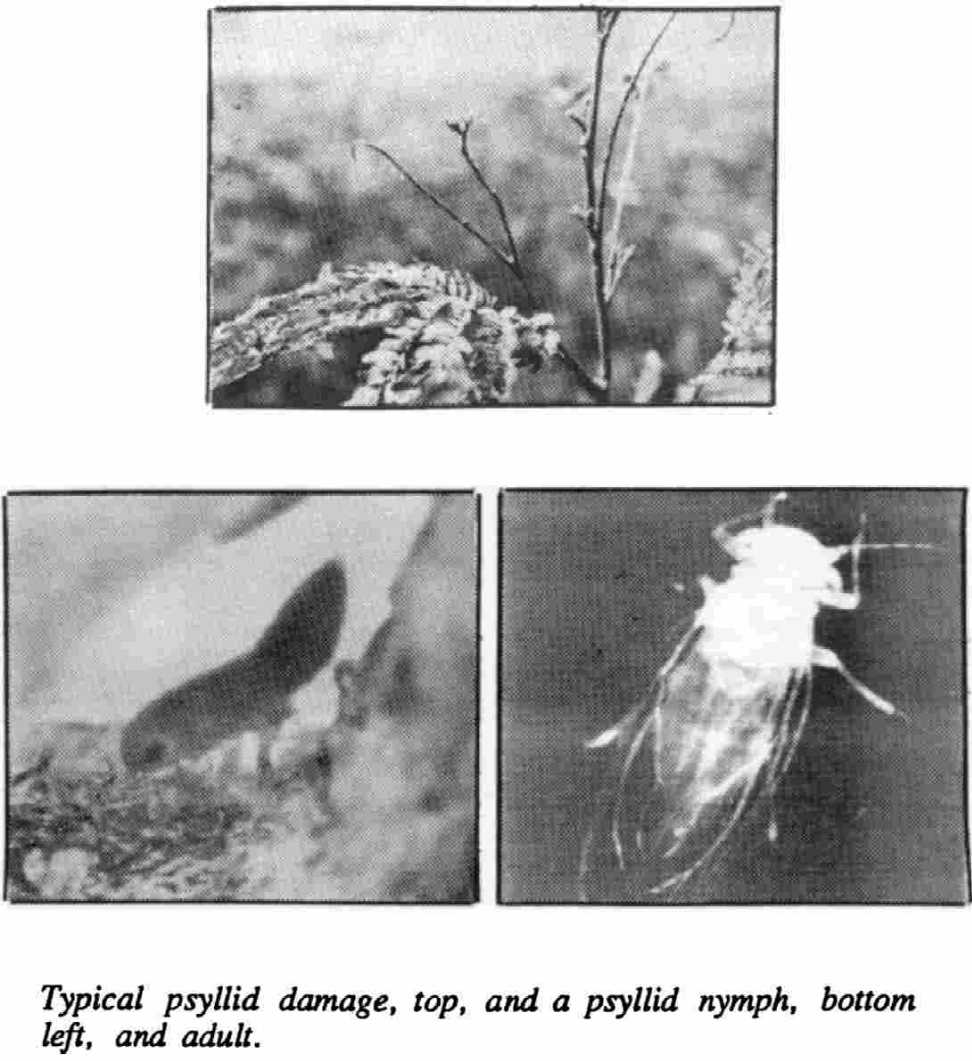 BIOLOGICAL CONTROL: Natural enemies of the psyllid normally have provided effective control in leucaena’s native range (Pound and Martinez 1983). Many general predators in areas invaded by psyllids also have been observed preying on them, although it is difficult to determine how effective they are in controlling psyllid populations (IDRC 1988).

Introducing host-specific predators or parasites could help solve the problem in some regions. Two coccinellid beetles, Curinus coeruleus Mulsant and Olla abdominalis (Say), were introduced to Hawaii in the 1920s to control mealy bug infestations on coconuts. Their populations increased substantially since the arrival of the psyuid. Curinus larvae have contributed greatly to the reduction of psyuid populations in most localities (Funasaki 1988). It appears that Curinus is able to control high populations of psyllids, but it may not be able to move into an area of rapid population increase fast enough to prevent early damage to leucaena (Waterhouse and Norris 1987). The Curinus beetle has been introduced into several Asian countries with successful establishment and partial control of the pest.

Host-specific parasites are preferred over general predators for introductions, since they pose less of a threat to other insects and plants. The parasitic wasp Psyliaephagus sp. nr. rotundiformis from Tobago was released on several islands in Hawaii in 1987. Numerous parasitized nymphs have been observed at several sites since February 1988. However, two hyperparasites, which are parasites of parasites, also have been observed on this wasp (Funasaid 1988).

Bray, R.A., and T.D. Woodroffe 1988. Resistance of some Leucaena species to the Leucaena Psyllid Tropical
Grasslands 22:12-16.

Hsieh, Huann-Ju, Yu-Cheng Chang and Fuh-Jiunn Pan. 1987. The potential of entomogenous fungi as a factor in control of
psyllids in Taiwan. LRR7(2):81-82.