Mimosa scabrella – The Tree that Fueled the Railroads of Brazil

NFTA 88-01, March 1988
A quick guide to useful nitrogen fixing trees from around the world

In the early 1900s Brazil’s steam locomotives ran on wood from plantations of Mimosa scabrella, commonly known as “Bracatinga”. Today, this fast-growing species is being planted in highland – areas around the world for fuelwood, lumber, charcoal, honey, fence posts, pulp, as shade for coffee tress, and as an ornamental. 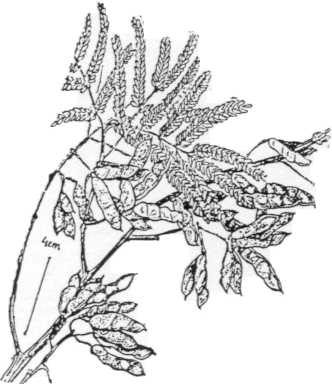 Botany
Mimosa scabrella Benth. (synonym M. bracaatinga Hoehne) is a member of the Mimosoideae subfamily of legumes. Mature trees reach 15-20 m in height and up to 50 cm in diameter with a straight bole and sparse, broad crown (Duke, 1981). Shrubby varieties are also found which are 4 – 7 m in height with a dense crown. The tree has small bipinnately compound leaves with tiny leafints, small white flower heads and small, narrow flat pods separated into joints that split open upon drying (Little, 1932). Throughout the year it sheds large Tiantities of nitrogen-rich leaves that decompose rapidly and form a very good liumus (NAS, 1979).

Ecology
Native to the cool, subtropical plateaus of southeastern Brazil, bracatinga thrives in low temperatures ranging from 12-18 C and tolerates infrequent frosts. It rarely occurs in areas with mean annual temperatures above 23 C. Bracatinga prefers an annual rainfall. above 1000 inm with no more than four months of less than 100 nm per month. It can tolerate strongly acidic soils, pH 4.8 to 5.1, deficient in P and K with a high aluminum content (Haeffner and Salante, 1981). It will not tolerate ket soils and growth is greatly affected in compacted, degraded pastures (Campos, 1984).

Establishment
Seeds (65,000/kg) remain viable for at least 3-5 years when stored in cold chambers. To obtain rapid and uniform germaination, seeds are scarified by puring boiling water over them and stirring gently for 3 minutes. Seeds can then be soaked in tap water for 24-48 hours to accelerate germaination. Direct seeding is possible with frequent weeding (NAS, 1980).
Successful establishment is also possible with bare-root seedlings. Nursery grown plants are ready for field transplanting in 2-4 months, or when seedlings are 15-20 cm in height and 8-12 mm in diameter.

There is a considerable amount of genetic variability in the species (Fonseca, 1982). Variation in growth and thickness of bark were detected between six seed sources collected in its native range. It has been suggested that M. scabrella is cross-pollinating.

FUELWOOD AND CHARCOAL:
Fuelwood plantations in Brazil are commonly planted at spacings of 2 x 2 or 3 x 3 m and harvested on 3-7 yr. rotations (Haeffner and Salante, 1981). Mean annual increments ranged between 8 and 36 M3/ha for 6 year old plantations in southern Brazil (Ahrens, 1981). In the deep, fertile, volcanic soils of Costa Rica mean annual increments of 45.7 M3/ha are reported (Campos and Bauer, 1985). Bracatinga also makes good charcoal, but it produces a large amount of ash (Lisbao, 1981).

OTHER WOOD PRODUCTS: The heartwood is hard with specific gravity reports ranging from 450 to 670 kg/m3 and is tinted a grayish- rose color (Lisbao, 1981). Sapwood is pinkish. The wood is used for lumlber and is straight-grained and medium textured with a moderately rough surface without luster. Tests of young plantation-grown wood show it can be pulped with sufficient quality for printing and writing paper. Fiber length is 1.2 mm. Stakes also are used for fence posts and in tomato production.

SHADE TREE: Highland coffee plantations in Guatemala and Costa Rica use bracatinga as a shade tree for coffee. Planted in Costa Rica at a spacing of 4 x 5 m in deep, fertile, well-drained, fertilized coffee plantations, it reaches 5-6 m in height and 8- 11 cm in diameter at breast height in 16 months (Picado, 1985).

INTERCROPPING: In its native region, bracatinga is often found growing in association with corn and beans (Barembuen, 1985). In the highlands of Kenya, has been planted along contour lines 8 to 30 m apart with corn for fuelwood production. It is not a good hedgerow species because it does not coppice.

OTHER USES: Commonly referred to as “the tree with many white feathers,” it makes a beautiful ornamental, avenue tree or living fence. Abundant flowering make it excellent for honey production As a pioneer species it established pure, dense stands throughout vast areas in Brazil’s Parana area after the native forests (Araucaria angustifolia) were cut and burned (Hoehne, 1930), indicating its reforestation potential (EMBRAPA, 1981).

A comprehensive research program with M. scabrella was initiated in 1980 by the Instituto de Pesquisas e Estudos Florestais (IDEF) and the Departmento de Silvicultura at the Universidade de Sao Paulo, Sao Paulo, Brazil.