Plant gums have been important items of international trade for centuries in the food, pharmaceutical, adhesive, paper, textile, and other industries. Of the plant families that produce gums, which are contained in seeds or exuded from damaged bark, the Leguminosae is the most important. Many species in this family are already being utilized, and others produce gums of unexploited commercial potential. 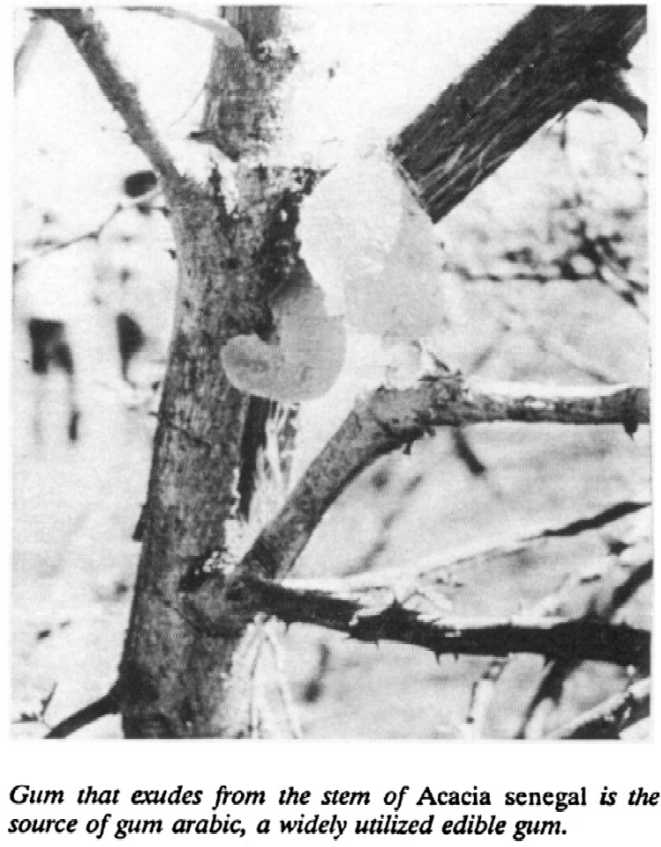 GUMS FOR FOOD USES
Gum Arabic: Acacia senegal (L.) Willd. is the classical, defined source of gum arabic, a highly water-soluble gum of relatively low viscosity. It is the only acacia gum toxicologically tested to establish its safety as a food additive. Applications include confectionery, medicated lozenges/pastilles, encapsulation of dried flavors/fragrances, and emulsification of citrus oils.

Acacia senegal is native, to the and Sahelian regions of Africa and the Middle East (NAS 1979). Gum arabic is often the principal source of revenue for semi-nomadic African people who gather it from wild, untended plants. Trees are grown commercially (“gum gardens”) or in state forests in the Sudan from nursery seedlings or in direct seeded plantations spaced at about 4 x 4 m. Tapping, which consists of slitting the bark and collecting the walnut-sized gum globules three weeks later during the dry season, begins about 5 years after planting and continues for about 15 years. An average annual yield is 250 g/tree, although production may range from a few grams to 10 kg (NAS 1979) or 0.2 to 6.7 kg (Duke 1981). Tree improvement programs and better management might increase quality and production. Gum arabic’s export price in Sudan, which produces about 85% of the world’s supply, was $3,450/ton (Oct. 1987), but the current trend is towards a lower price.

Commercial high tonnage gum arabic production requires severe physiological stress from water depletion and heat. Gum formation has been regarded as a natural response of trees under dehydration stress to store a strongly hydrophilic form of reserve carbohydrate. Gum is known to be formed at leaf-fall and translocated to roots even though the tree has not been “tapped.”

Despite this drought resistance mechanism, two droughts (1973-75 and 1983-1985) decreased production and killed many trees. Gum shortages increased prices and led to the development of more cost effective modified starches, celluloses and biosynthetic/fermentation products that can replace or extend gum arabic. Consumption has dropped from 70,000 tons in 1972 to 20,000 tons today. For some applications, these alternative hydrocolloids are not as satisfactory as gum arabic, but research is continuing (Anderson 1987). This should not prohibit the extensive planting of A. senegal in and zones, however. For ecological reasons alone. A. Senegal also produces firewood, food for animals and people, and other products (NAS 1979). There is always the possibility that some, at least, of the gum that can be collected will be marketable, especially if more systematic and widespread production decreases prices, hygiene and storage standards improve, research identifies new uses of natural gums, and the marketing strategies of the Sudan are improved with a decrease in the present excessively high rate of export tax (40%).

Gum Tragacanth: Asiatic Astragalus species are the defined source of gum tragacanth, widely used in pharmaceuticals and cosmetics; as a thickening agent in syrups, salad dressings and sauces; in textile sizing; and as an adhesive (Allen and Allen 1981; NAS 1979). The gum comes from bushes that grow in the and mountains of countries from Pakistan to Greece, particularly Iran and Turkey. Plants are widely scattered and gum is usually collected unsystematically by villagers. Plants develop a mass of gum in the center of the root, which swells in the summer heat. If the stem is slit, a ribbon of soft gum is exuded. Over the past few years gum tragacanth demand and hence production has declined, partly because of its high cost (up to $80/kilo in 1985- 87). As a result demand fell in 1988 to a few hundred tons and prices fell by up to 50%. Its deliberate cultivation in appropriate regions may be rewarding. However, little is known about the environmental and genetic factors that enhance gum yields and quality.

GUMS FOR NON-FOOD APPLICATIONS
Gums without a long history of safe use and toxicological evaluation, and not already included in international lists of permitted food additives will probably never be included (Anderson and Farquhar 1982). The cost of toxicological evaluations is prohibitively expensive — at least $1 million — and can take 8-10 years to complete, followed by 2-3 years evaluation by international regulatory committees with no guarantee of final approval. Although these non-food gums are of little commercial interest internationally, they may be used for local technological applications.

Gum Tahla: Acacia seyal Delile, a large, thorny tree of the Sahel, is one of several acacias that produces gum tahla, a water-soluble gum traditionally used for non- food applications such as lithographic formulations, textile and paper manufacture, foundry moulding sands, and explosives. Other globose-flowered acacias (e.g., A. hockii, A. sieberana, A. ehrenbergiana, A. drepanolobium, A. abyssinica, A. nilotica, and A. arabica (frequently misquoted, especially in India, as the source of gum arabic) may also contribute to the gum parcels commonly offered in West and East Africa. All such species give poor quality gum, usually dark, with a high tannin content, and of poor solubility. About 3000-5000 tons are exported annually. The October 1987 price was $1100- 1300/ton. There is currently a world surplus of poor quality, dark gum from many botanical sources in India, Africa and South America. A. seyal is also a useful source of firewood, lumber and sheep and goat forage in arid areas with 350 mm or more of annual rainfall (NAS 1980). Other Acacia species that produce gums with possible commercial non-food uses include A. auriculiformiss, A. berlandieri, A. hebeclada, A. mellifera, and A. saligna (NAS 1979).

Prosopis Gum: Gum from Prosopis species was collected and marketed in Mexico, South America, and the southwestern United States from the 1940s to the 1960s. The comparatively low viscosity of prosopis gum’s aqueous solutions made it a useful substitute for gum tahla and technological grades of gum arabic. In general, the analytical parameters of the prosopis gums are similar to tahla gum (Anderson and Farquhar 1982; Anderson et al 1985). Mesquite (common name for Prosopis spp. in the Amereicas) gum is no longer readily available, probably because of eradication programs in areas where mesquite is considered a thorny pest. Nevertheless, there may be agroforestry opportunities in areas where windbreaks or soil stabilization and enrichment are desirable (Felker and Bandurski 1979).

Sesbania Gum: Some Sesbania species produce exudate or seed gums (NAS 1979; Evans and Rotar 1987). S. grandiflora, the closely related S. formosa and to a lesser extent S. sesban and other species, exude gum from cut or damaged bark. It has been used as a substitute for gum arabic in some applications. However, seeds are the best source of gum from sesbanias. India and Pakistan have investigated using S. sesban and particularly S. bispinosa as alternative sources of guar gum (produced by Cyamopis tetragonolobus), which is used in making textiles, paper products and for thickening and stabilizing solutions. Guar gum of specified quality is permitted for use in foodstuffs and this market is increasing steadily.

Leucaena Gum: Leucaena may become an important gum producer. Chemical analysis of gums from L. leucocephala, L. pallida and their hybrids indicate distinct similarities to gum arabic (Anderson 1986; Anderson and Douglas 1988) in terms of chemical composition, although the water-solubility of the leucaena gums evaluated so far has been greatly inferior to that of gum arabic. Further chemical analyses are in process and the study of gum production management and yields are now needed.