NFTA 92-08, December 1992
A quick guide to useful nitrogen fixing trees from around the world

Olneya tesota, called Desert Ironwood, Tesota or Palo fierro, is a conspicuous tree in much of the Sonoran Desert of southwestern North America. Valued for its wood, this long-lived desert tree has potential for development as a tree food crop for hot and climates. 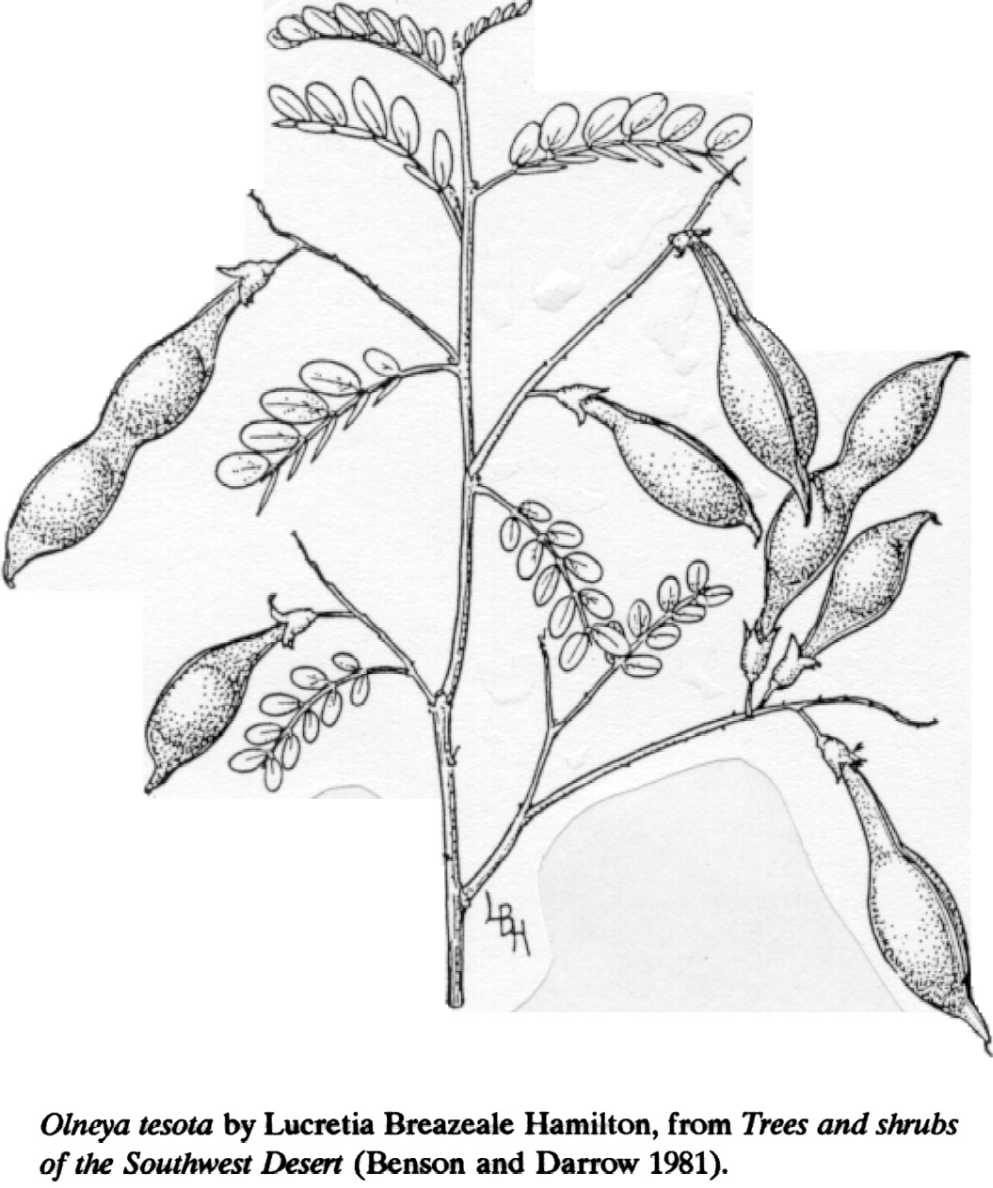 Botany
Olneya tesota A. Gray (Leguminosae, subfamily Papilionoideae) is the sole member of the genus Olneya. It grows as a small tree to 10 m in height and spread, commonly with several trunks. The trunks can attain a diameter up to 60 cm on very old individuals. Young twigs up to 10 or 15 mm thick are green. The bark of limbs is gray and smooth, becoming fissured and eventually shredding on older limbs and trunks. Painfully sharp, paired spines, 3-11 mm long occur at each node.

The foliage is cold and drought deciduous but trees in favorable locations may remain nearly evergreen. The once-pinnate leaves are up to 6 cm long with 6 to 20 grayish green leaflets. Leaflets are 7 to 20 mm long. Pink to lavender pea-like flowers, 15 mm long, appear in short, dense racemes or panicles in the late spring. In some years they cover the trees with dense masses of color. While most individual trees flower each year, flowering appears to be heavy only about two years in five. The pods ripen in the summer and contain one to several round seeds 5-6 mm in diameter. Mature pods rapidly dehisce.

ECOLOGY. Olneya tesota is adapted to hot and climates. Average rainfall over its range varies from 75- 400 mm. The tree occurs from below sea level to approximately 900 m elevation, most often in sandy and rocky soils of plains, slopes and along dry washes. Its Ph limits are unknown, but it grows well in soils with a range of 7 to 8.5.

Along its range, O. tesota is a dominant component of many plant communities. In the more and portions of its range it is restricted to dry desert watercourses where storm runoff increases the available moisture. The largest individuals are found in these habitats, often forming woodlands with other desert trees including Cercidium floridum, Prosopis glandulosa var. torreyana, P. velutina, Acacia greggii, and others (Felger 1992). Seeds require rainfall or storm runoff during the hot season to germinate. Few seedlings which germinate away from the protective cover of other plants survive rodent predation.

Olneya tesota tolerates some freezing but generally sustains stem damage below -6o C. Prolonged exposure to lower temperatures may cause severe damage or death. It tolerates summer temperatures of 45o C. Because of its preference for warmer sites, O. tesota has been used as an indicator plant in choosing locations for citrus plantations (Little 1950). The trees are long-lived, perhaps attaining 200 years of age. Dead stumps can persist for decades. The trees serve as a source of food and shelter for many species of wildlife. Other desert plants, including shrubs, vines, cacti, and annuals, often grow in the microclimate beneath the canopy of O. tesota.

DISTRIBUTION. Olneya tesota is endemic to the Sonoran Desert Region. It is found in central and southwest Arizona and southeast California, USA, much of the Baia California peninsula, western Sonoran and extreme northwest Sinaloa, Mexico (Hastings et. al 1972).

USES. Human Food. The seeds of O. tesota have been used for food by native Americans. Fresh, uncooked seeds have a taste similar to soybeans (Glycine max). Felger and Moser (1985) report that the Seri Indians of Sonora, Mexico, cooked the seeds in water, emptied the water and then cooked the seeds a second time in fresh water to remove an unpleasant smell. The cooked seeds were eaten whole, or ground and salted. The seeds contain Canavalin a mild toxin (Rosenthal 1977). Roasted seeds have been used as a substitute for coffee.

Wood. The wood is very hard, dense and durable. It will not float in water. Olneya tesota is cut for fuelwood, charcoal and carvings. The heartwood is dark brown and takes a beautiful polish. The trees do not respond well to coppicing. Larger trees are usually killed by this practice and recovery of younger plants is slow. Widespread cutting of O. tesota has seriously reduced the numbers of these trees in areas of Mexico. 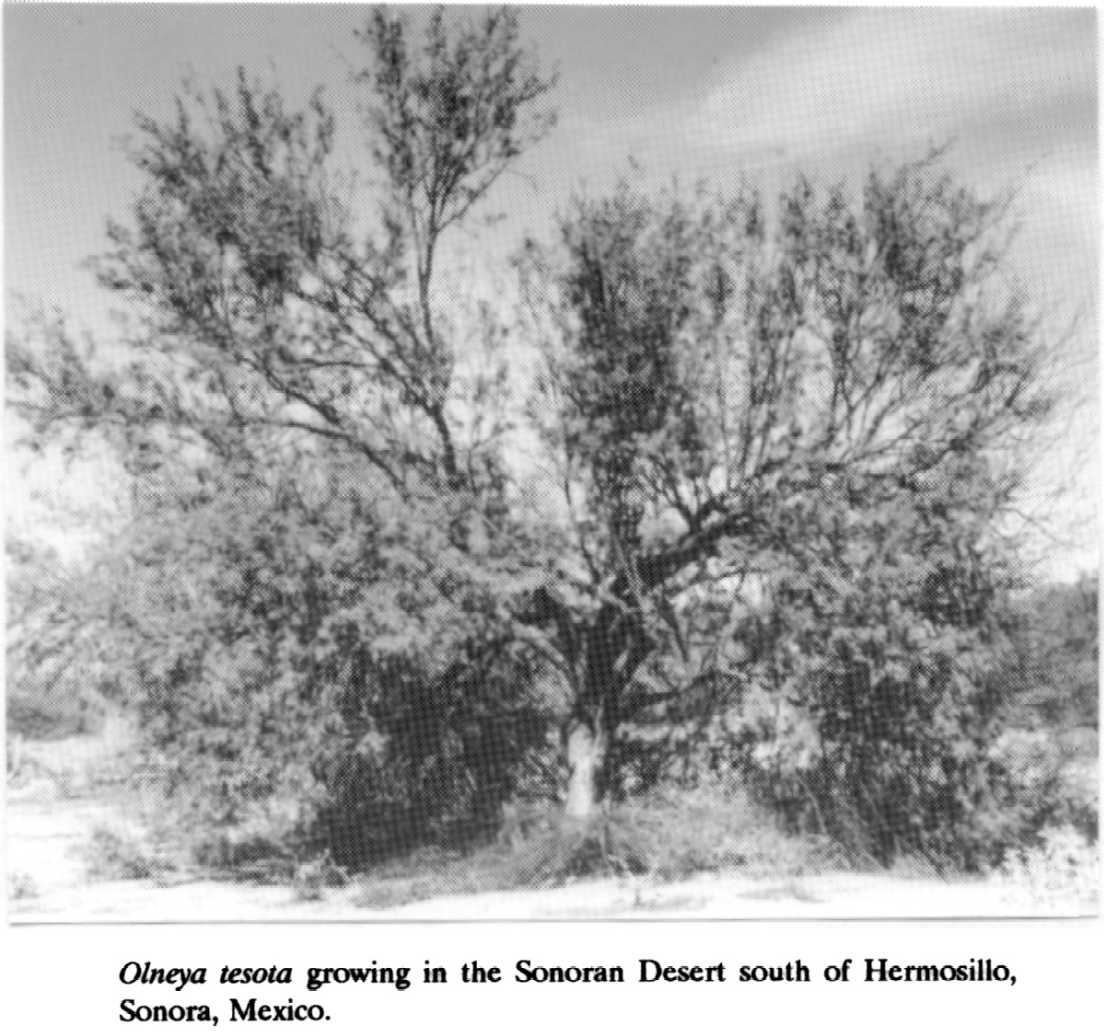 Other uses. Wildlife and domestic livestock browse the foliage to some extent (Allen and Allen 1981). Olneya tesota is cultivated as a landscape tree in hot and regions of southwestern United States. The nearly evergreen foliage, dense shade, showy flowers and attractive form make it well suited for a variety of landscape functions. Trees up to 8 m tall have been successfully transplanted by side-boxing.

SILVICULTURE.
Propagation. Olneya tesota is propagated from seeds. Scarification of the seeds enhances uniform germination but fresh seeds will germinate without scarification. Optimum temperature for germination appears to be 25-30o C. Fresh seeds often have 80-90% germination. Emergence usually occurs in 4-12 days. Seedlings can reach 25 cm tall in their first season.

Seed Production. Optimum conditions for fruit production are not fully documented. Unless supplemental irrigation is available in and regions, O. tesota grows slowly, prolonging the time it tales for the tree to reach flowering size.

SYMBIOSIS. Felker and Clark (1981) report that O. tesota seedlings grown in nitrogen free media produced nodules when inoculated with soil taken from beneath wild trees. Allen and Allen (1981) indicate that modulation has been reported from cultivated trees of O. tesota in Zimbabwe.

LIMITATIONS. Desert Mistletoe (Phorodendron californicum) can be a serious problem on O. tesota in its natural range. Heavy infestations can weaken and even kW mature trees. Control can be achieved by periodically removing the clumps of mistletoe.

Young plants may be severely damaged by browsing, particularly by rodents. No significant disease problems have been reported. The plants do not appear to be fire resistant. The spiny stems can be a nuisance to people working around the plants.

RESEARCH NEEDS: Methods of vegetative propagation should be investigated to provide a convenient method of propagating selected cultivars. Trial plantings are needed to determine how this species may perform under field conditions.

Hastings, J.R., R.M. Turner and D.K. Warren. 1972. An atlas of some plant distributions in the Sonoran Desert. The University of Arizona, Institute of Atmospheric Physics, UA-IAP-TR-72-21, Tucson, Arizona.

Rosenthal G. A. 1977. The biological effects and mode of action of L-canavaline, a structural analogue of L- arginine. Ouarterly Review of Biology 52:155-178.