NFTA 95-04, June 1994
A quick guide to useful nitrogen fixing trees from around the world

Ougeinia dalbergioides Benth. (Leguminosae, Subfamily Papilionoideae) is a monotypic genus formerly classified as Ougeinia oojeinensis and Dalbergia ougeinesis. It is a valuable timber and fodder species restricted to India. The natural forests containing this tree have been severely degraded by timber exploitation. Ougeinia dalbergioides is most commonly called sandan. 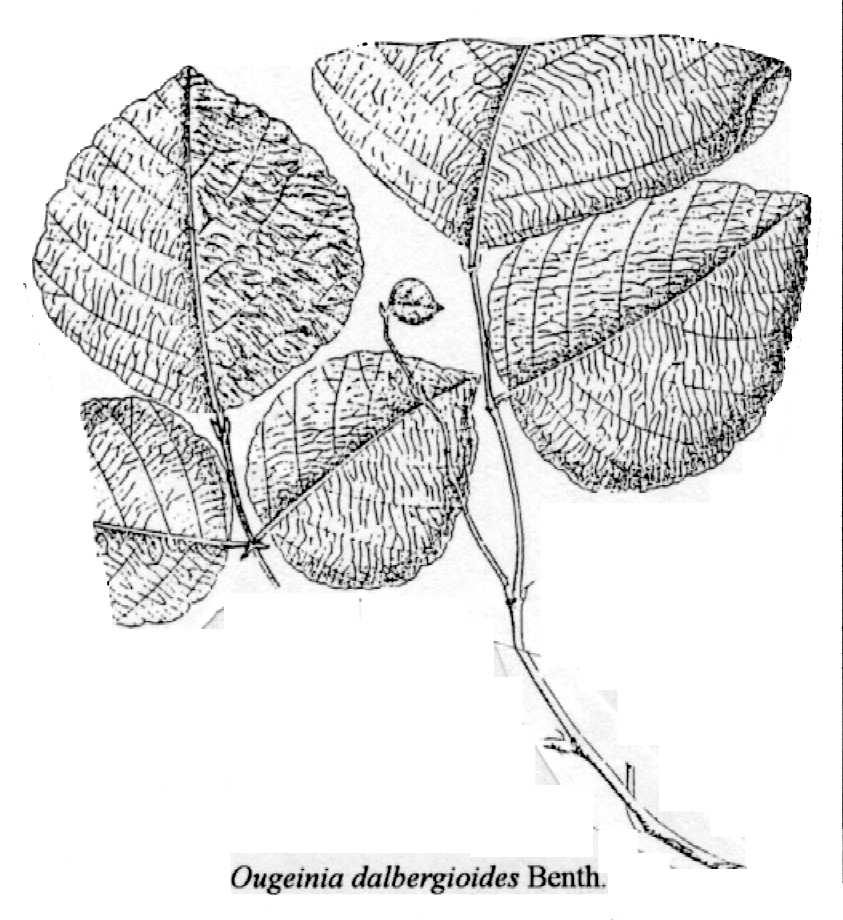 Botany
Ougeinia dalbergioides is a medium-sized semi-deciduous tree, commonly attaining 40-50 cm in diameter breast height (DBH) and 7-14 meters in height (Troup 1921). The stem is often crooked, but in some areas the tree is straight. The bark, varying from pale pinkish-brown to dark bluish gray, is somewhat rough and exfoliates in irregular thin soft scales. Leaves are pinnately trifoliate, smooth above and lightly pubescent below. The obovate leaflets are generally 6-12 cm long and 2-15 cm wide, but size varies greatly. Leaf margins are entire.

The light-pink to white flowers emerge in clusters from February to May. The previous years branches generally do not bear flowers. Branches bearing flowers are leafless, while others retain leaves. Flowering trees are conspicuous and afford a beautiful sight.

Pods have a distinct scam, are 5-10 cm long and 1 cm wide. They mature and ripen in May to June and fall chiefly in June. Normally, pods remain closed until seeds germinate. Mature pods yield 2-5 viable seeds. The smooth brown seeds are 10-12 mm long and 5 mm wide. Trees do not seed heavily each year (Troup 1921).

Ecology
Ougeinia dalbergioides is native to sub-tropical regions of India. It is common at elevations of 300-1500 m. At higher elevations it remains a small tree. The optimum mean annual temperature in its habitat ranges from 20-47oC with a relative humidity from 49-90%. The optimum rainfall appears to range from 950-1900 mm. This species is not found in wet regions. Characteristic of limestone soils, sandan grows well on dry exposed sites and eroded hills (Troup 1921). It also occurs on alluvial soil, red clay, black cotton, and rocky soil. Its best growth and greatest size is attained in the lowlands on alluvial soils. Sandan is a component of mixed deciduous and sal (Shorea robusta) forests. It is associated with pines at the higher limits of its elevation range.

Distribution
Ougeinia dalbergioides is found in the sub-Himalayas foothill and plains of the Punjab eastwards to Bhutan. It is also common in Central and Northern India and in some parts of Southern India. It is an important species in Uttar Pradesh and Madhya Pradesh.

Uses
Wood. Ougeinia dalbergioides yields a valuable timber. The sapwood is grey and narrow, the heartwood is light golden brown, hard, strong, heavy and elastic-specific gravity is 0.84 and average weight is 865 kg/cubic meter. The wood air seasons slowly without much degradation. The wood can be kiln-seasoned without difficulty, but requires slow and careful drying. Planks 2-5 cm thick require 16-20 days to season (Pearson and Brown 1932; Trotter 1944). The wood does not require preservative treatment. It is difficult to work, but turns well and takes polish readily. Though originally considered difficult to peel, it is now frequently utilized for plywood. The timber of this species is superior to teak (Tectona grandis) in terms of shock resistance, shear strength and hardness (Pearson and Brown 1932). Sandan timber is used in the manufacture of agricultural implements, construction timbers, furniture and textile mill implements. It is also a specialty timber for marine plywood. It is a good fuel with a calorific value of 4900-5200 Kcal/kg (Krishna and Ramaswand 1932).

Fodder. The leaves are highly valued as cattle feed. Farmers lop side branches, but often spare the main limbs to assure good growth and future supplies of fodder. In some areas, natural stands of this species are such important fodder resources, timber harvesting is forbidden. Leaves contain 12- 15% crude protein (Singh 1982).

Other uses. Bark fibers are suitable for making rope (Pearson and Brown 1932; Trotter 1944). The bark is used as a fish poison and to reduce fevers. A sap exudate is used to make a medicine to treat dysentery. The tree is a host plant for lac producing insects. The resulting shellac is of high quality (Purkayastha and Krishnaswamy 1958).

Propagation
Ougeinia dalbergioides is readily propagated from seed. The seeds do not retain their viability for long and should be used within 12 months of maturity. Once collected seed should be properly dried and stored in sealed containers. A kilogram contains 28,000-33,000 seeds. To maximize germination, pods should be broken into fragments containing one seed and soaked in water for 24 hours before sowing (Uniyal and Nautiyal 1992). Seed should be sown 1 cm deep. Germination occurs in 3-8 days. Direct sowing is very successful and highly recommended (Troup 1921; Kadambi and Dabral 1955).

Nursery-propagation accelerates seedling growth, however the large taproot of sandan makes transplanting difficult. Establishment by stump sprouts gives good results. One-year old seedlings with root-collar diameters of 5 cm are recommended. For stump production, seedlings should be cut 2-3 cm above the root-collar and 20-25 cm below. Propagation by root cuttings is successful, but stem cuttings yield poor results.

Silviculture
Young trees and seedlings need a moderate amount of shade. However, once established O. dalbergioides requires full sunlight for its best development. Although young trees are drought and frost sensitive, mature trees are hardy. A tree spacing of 3 x 6 m is recommended for timber production.

Mean annual growth increment averages between 3-20 mm in DBH. Trials in Srinagar indicate keeping seedlings free of heavy weed competition for 34 years will improve growth and survival. Under this management scheme, trees attained heights of 4-5 m and DBH of 10.5 cm in 6 years. Conversely, heavy weed competition can kill seedlings. Sandan coppices well and produces abundant root-suckers. This characteristic is particularly useful for controlling erosion along steep banks and eroded hillsides. Fast-growing coppice and root-suckers attain 7-10 m in height and 12-17 cm in DBH after 20 years. Coppice and root-suckers can be managed for timber production. In Madhya Pradesh forests are commonly managed simultaneously for sandan and teak production. The exploitable diameter for O. dalbergioides timber is generally 30 cm.

Symbiosis
As with many other leguminous plants, Ougeinia dalbergioides forms nitrogen fixing symbiosis with Rhizobium bacteria. Reliable estimates of its nitrogen fixing capacity are not avaflable.

Genetic Variation
A variant of this species has been reported to occur at a frequency of 4% in Srinagar. Variants differ morphologically from the normal plants by producing narrower leaves with 4- 6 leaflets instead of three. The morphological difference has been retained by trees established in an arboretum in 1985 (Purohit et. al 1987). These plants grow 30% slower than the normal plants. Detailed investigations on the physiology of variant plants are in progress.

Purkayastha, B. K. and S. Krishnaswmny. 1958. Trials of Albizia lucida and Ougeinia dalbergioides as new lac hosts for the baisaklu crop in Chota Nagpur. Indian Forester 84(3):137.