NFTA 89-05, September 1989
A quick guide to useful nitrogen fixing trees from around the world

By whatever common or scientific names it is known, Paraserianthes falcataria (L.) Nielsen is a valuable multipurpose tree for the humid tropics. One of the fastest growing of all tree species, it is used for pulp and other wood products, fuelwood, ornamental plantings and shade for coffee, tea and cattle. Potential uses for which it is being tested include alley farming and intercropping in forest plantations. 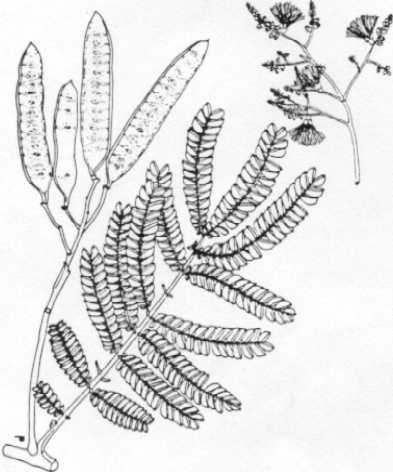 BOTANY: “Falcataria” belongs to the Leguminosae (subfamily: Mimosoideae). It is most widely known by its former name, Albizia falcataria but it also has been called A. moluccana and A. falcata. “Falcate’ means “curved like a sickle,” referring to its leaflets. Leaves are alternate, bipinnately compound, and 23-30 cm long. Flowers are creamy white, and pods are narrow, flat, 10-13 cm long and 2 cm wide. This is a large tree that regularly reaches 24 to 30 m in height and 80 cm in diameter. When grown in the open, trees form a large, umbrella-shaped canopy. Crowns are narrow when this light-demanding species is grown in plantations of 1000 to 2000 trees/ha. Trees regularly produce large quantities of seeds after reaching 3 to 4 years of age.

ECOLOGY: Falcataria occurs naturally in Indonesia, Papua New Guinea, and the Solomon Islands from 10° S to 30° N. In its natural habitat it grows from sea level to 1200 m above sea level with an annual rainfall from 2000-4000 mm, a dry season of less than 2 months, and a temperature range of 22° to 34° C. Although it is likely to perform better on alkaline soils (NAS 1983), there are many examples of it growing well on acid soils.

Correlation and multiple regression analysis show that topsoil depth is the most important indicator of site quality for falcataria (Dalmacio 1987). The most productive sites had at least 19-26 cm of well drained topsoil with at least 3-8% organic matter and an exchangeable potassium of 0.36 meq/100 g of soil.

ESTABLISHMENT.- Seeds (42,000/kg) germinate easily and only require an overnight soaking in water. For more uniform germination, seeds can be treated with hot water, or dipped in concentrated sulfuric acid for 10 minutes followed by water for 15 minutes (NAS 1983). Seedlings are ready for planting in about three months and grow so fast in the field that one complete and three spot weedings during the first year are sufficient.

Liming the soil from pH 6.5 to 7.0 did not improve growth or modulation (Ordinario 1986). Providing both nitrogen and phosphorus produced a marked increase in early growth in a red-yellow podzolic soil deficient in each nutrient (Moloney et al. 1986).

SYMBIOSIS: Nodulation by Rhizobium occurs in most soils with sufficient moisture and a pH ranging from 5.5 to 7.0. Inoculation enhanced growth and modulation in potted grassland soils. Nodulation of inoculated seedlings decreased with the application of 100 kg N/ha and was totally suppressed with the application of 2.00-300 kg N/ha (Garcia et al 1988). Falcataria also is associated with endomycorrhizal fungae, which when inoculated enhance its growth and modulation (de la Cruz et al 1988).

GENETICS: At the Paper Industries Corporation of the Philippines (PICOP) plantations in Mindanao, introduced provenances performed better than local provenances. Nuevo (1976) reported that branching habits are an inherited trait. In terms of wood properties, tree to tree variation tends to be larger than variation due to stand locations and gross morphological classes.

USES: Falcataria is perhaps best known as a pulp crop (NAS 1979, Hu 1987). Other wood uses include fiber and particle board, packing cases, boxes, matches, chop sticks and light furniture. Wood is difficult to saw and not strong or durable.

Its thin crown provides partial shade to coffee, tea, and cacao. It also is used as a windbreak for bananas. Trials in Hawaii have indicated its usefulness as an intercrop with eucalyptus, especially in wetter areas. After four years, eucalyptus grown with falcataria in a 50:50 mixture at a spacing of 2 x 2 m were 58% taller and 55% larger in DBH than in pure eucalyptus stands (Schubert 1985). In other trials with 34 and 50% falcataria, total biomass was equal to or better than that of pure stands (Schubert et al 1988).

Falcataria also is grown as an ornamental, although it seldom lives more than 50 years (APCF 1987) and its brittle branches can be a problem in windy areas. Raharjo and Cheeke (1985) reported that foliage scored well in some palatability tests with rabbits and poorly in others. 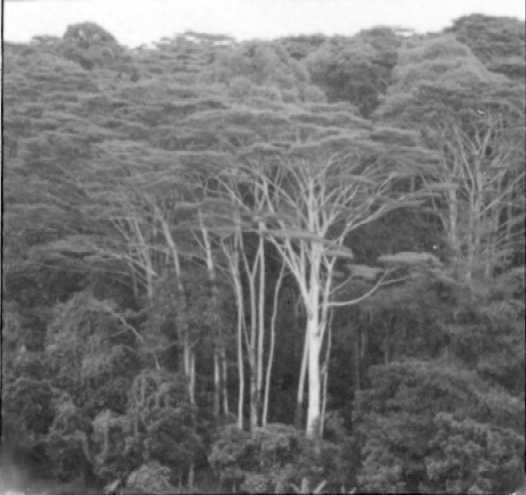 P. falcataria is one of the fastest growing of all tree species, reaching 7 m in height in one year under ideal conditions

Its wood is soft and generally light in color with a reported specific gravity range of 0.20 to 0.49 (NAS 1979; Little, undated). Ecotypes with denser wood have been found at PICOP plantations. Despite its low specific gravity and caloric value, its fast growth and vigorous coppicing ability make it worth considering as firewood (NAS 1983). It is used as firewood in Western Samoa, the Philippines and Java, where it is frequently planted in home gardens for fuelwood and timber with herbaceous and fruit crops. It makes a good charcoal.

DISEASES AND PESTS: Seedlings are susceptible to root rot caused by Betrydiplodie and Sclerotium (Domingo 1977). Leaf spots are caused by Phyllachora pterocarpil and Pestalotia species. Stem and branch canker is caused by Coticum salmonicolor (Quinones 1980, de Guzman 1974). Pests such as larvae of yellow butterflies (Eurema sp.) have been reported to attack plantations in the Philippines, Malaysia and Burma (Domingo 1977). The stem borer, Kysomerafestiva sp., is an important pest in Burma, Indonesia and Vietnam (Domingo 1967). Shoot pruner beetles (Callimetopus sp.) occasionally have caused significant damage to trees in the Philippines (Braza 1988).

PROBLEMS AND LIMITATIONS: Since falcataria is easily damaged by high winds, most successful plantations in the Philippines are found in areas not frequently hit by typhoons. The tree regenerates so easily by natural seeding on any clearing that it can spread rapidly and become a pest. However, falcataria is very susceptible to herbicides. Soil erosion in falcataria plantations can be a problem, and it is not a recommended species for steep hillsides (NAS 1983).