Pentaclethra macrophylla : a multipurpose tree from Africa with potential for agroforestry in the tropics

NFTA 95-05, September 1995
A quick guide to useful nitrogen fixing trees from around the world

Pentaclethra macrophylla Benth., the oil bean tree, is the sole member of the genus occurring naturally in the humid lowlands of West Africa. It is a leguminous tree (family Leguminosae, sub-family Mimosoideae), and recognized by peasant farmers in the southeast of Nigeria for its soil improvement properties. A related species viz. Pentaclethra macroloba (Wild) is native to South America (Norris 1969). Pentaclethra macrophylla has been cultivated in Nigeria since 1937 (Ladipo 1984) and for many years in other West African countries where its seed is relished as a food. Pentaclethra macrophylla was not known to nodulate until recently (Ladipo et al. 1993). With the diverse native uses of this species, and the present research effort on it, its utility could be further enhanced for agroforestry development in the humid tropics. The species is relatively fast-growing and seedlings will achieve a height of 1.5 m in the first year on good sites.

Botany
Trees grow to about 21 meters in height and to about 6 m in girth (Keay 1989). The tree has a characteristic low branching habit and an open crown which allows substantial light under its canopy. This characteristic accounts for the trees use in combination with food crops on farms and particularly in home gardens in south east Nigeria.

The bole produces a reddish-orange coloration after a slash is made. Stem form is usually crooked and buttressed. Some straight-stemmed and less buttressed trees, which can pass for good timber, are occasionally seen in the forests. Bark is grayish to dark reddish brown (Keay 1989), thin and patchy with irregular pieces flaking off.

Leaves possess a stout angular petiole. The compound leaves are usually about 20-45 cm long and covered with rusty hairs giving a scurfy effect particularly along the upper surface but this eventually falls off. There are 10-12 pairs of stout opposite pinnae. The middle pairs are 7-13 cm long and also have rusty hairs along the central grove. There are usually 12-15 pairs of opposite stalkless pinnules (leaflets), each 12-15 cm long 5-10 mm broad, with the middle pairs longest. Leaflets often have a rounded tip but are sometimes notched; the base is unequal. Flowers are creamy-yellow or pinkish-white and sweet smelling. Flowering commences at variable periods within West Africa. The main flowering seasons is between March-April with smaller flushes in June and November. Fruits are available at most periods of the year because the large woody pods are persistent.

The pods are 40-50 cm long and 5-10 cm wide. Fruit splits open explosively with the valves curling up. This is the form in which they appear on most trees. Usually, pods contain between 6-10 flat glossy brown seeds which may vary in site. The seed are up to 7 cm long. This is the edible product and source of the oil; hence the name ‘the oil bean tree’.

Distribution and Ecology
Pentaclethra macrophylla occurs from Senegal to Angola and also to the Islands of Principe and Sao Tome. This multipurpose tree is endemic to the humid and some parts of the sub-humid zones of West Africa. It does not occur in the highlands although, growth can be good where rainfall is adequate and temperatures are never cooler than 18°C. The annual mean temperature requirement is about 25°C and rainfall between 1000-2000 mm. After about 2-years growth in the forest, trees become relatively fire resistant and resprout readily when lopped.

The natural distribution of P. macrophylla suggests that it is endemic to relatively acid soils. The species will also tolerate water logging as in the low altitudinal riverine areas of southeast Nigeria,
Togo and Cameroon.

The unusual feature of leaf loss during the wet seasons has been observed in the field on some individual trees of Pentaclethra macrophylla and this could be an important trait for selection for farmers. Although no provenance trials of this species have been conducted, tree phenotype in natural populations shows considerable variation in crown shape, fruit morphology and seed size. 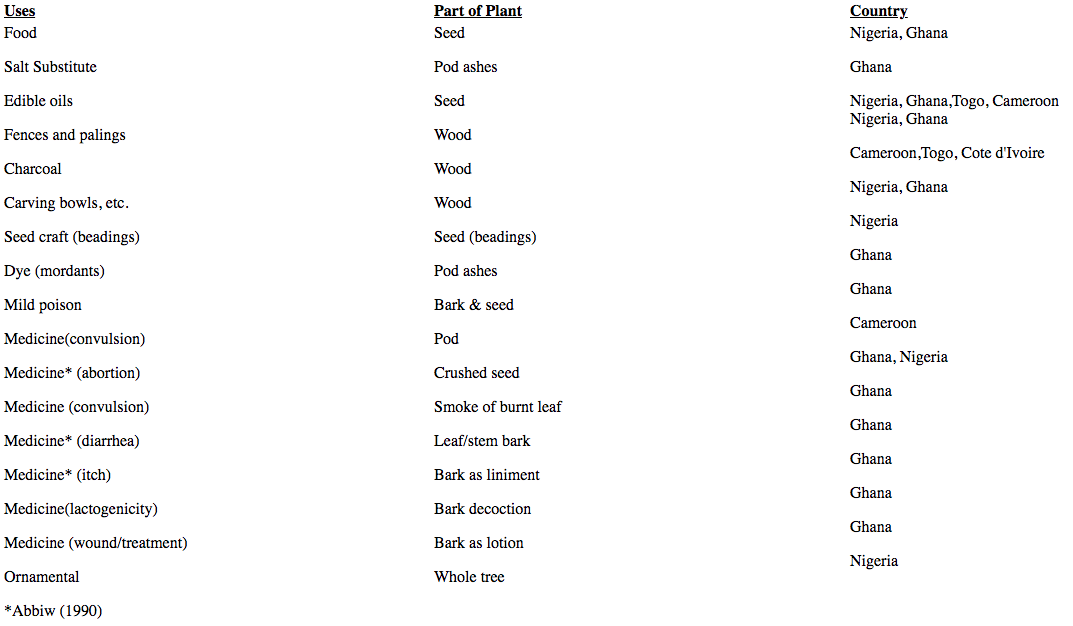 Pentaclethra macrophylla is planted on the fringes of compound farms mainly for its edible seed. Okafor & Fernandez (1987) described the species as a major component of this agroforestry system. Its empty dry fruit pods are used as fuelwood for cooking. Leaves are shed during the dry season and farmers believe this contributes to soil fertility within the home garden. Pentaclethra macrophylla wood is highly suitable for fuelwood and charcoal making (other uses are listed on Table 1). Farmers protect this species on farms because of its open crown form which does not inhibit crop plants grown under its canopy. Litter drop is appreciable. The species is believed to enhance soil nutrient and organic matter content.

The seed is large with approximately 50-80 seeds per kg. Because seeds are edible, they are not usually available for seedling production. When available in the open market, they are usually non-viable because of their short longevity (recalcitrant). Consequently seed should be planted immediately. Storage at 15°C can extend longevity for about three months. Seed pre-treatment is required. Mechanical scarification and soaking in water for 24 hours will enhance germination.

Adult trees are easily marcotted (air layered), but only juvenile stem cuttings will root if treated with IBA (20 ppm). Seedlings produced in nurseries and hardened-off before out-planting make the best planting material.

Pests & Diseases
No serious pest and disease problems are known but stem borers have been recorded on some old trees and mild defoliation of juvenile seedlings is not uncommon. The species is reported to be termite resistant.

A publication of the Forest, Farm, and Community Tree Network