NFTA 92-01, March 1992
A quick guide to useful nitrogen fixing trees from around the world

Many N-fixing trees are alternately praised and cursed. Hardy, tenacious, seedy, and able to provide their own nitrogen, they often colonize soils and sites that are difficult or impossible for other trees. Pithecellobium dulce is such a tree.

Pithecellobium dulce is a thorny tree which can become weedy. In Hawaii it has a reputation as a pest in grass pastures, but normally only when fields have been left nitrogen-starved. It is a tree with many uses; food (sweet pods), firewood, honey, fodder, soap oil, tannin, hedges and shade–and it can survive hostile climates. The generic name refers to the curly pod, that mimics an ape’s earring (pithekos ellobium), and the species name “dulce” refers to the sweet pod. 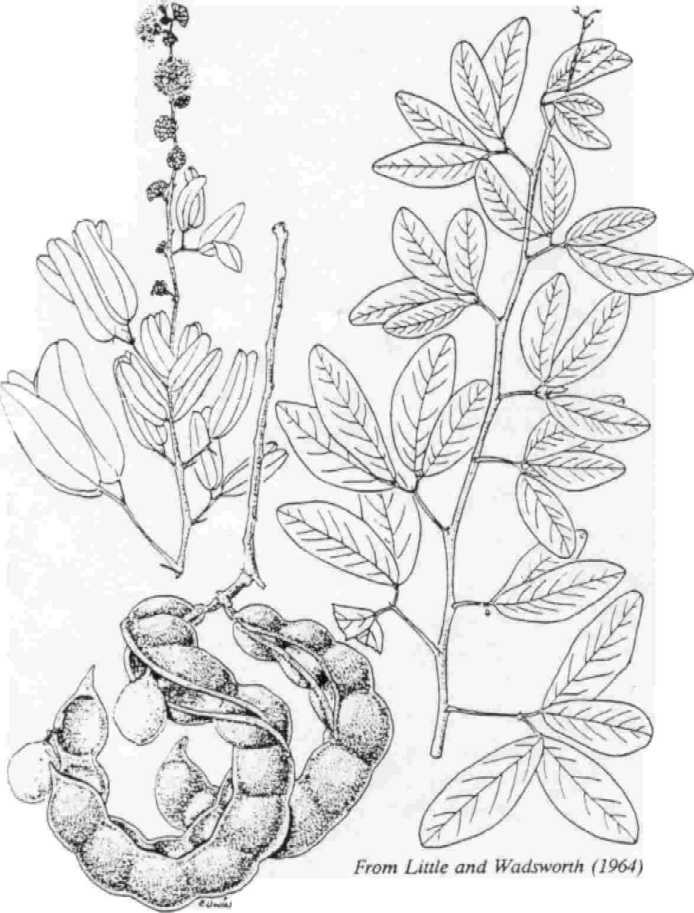 The height of P. dulce is commonly 10-15 meters, but ranges from 5 to 18 m. They are broad-spreading with irregular branches. The bark is grey, becoming rough, furrowed, and then peeling. Leaves are bipinnate, and leaflets oblong to 4 cm in length. Thin spines are in pairs at the base of leaves, and range from 2 to 15 mm in length. Leaves are deciduous. However, new leaf growth coincides with the loss of old leaves, giving the tree an evergreen appearance.

The flowers are in small white heads 1 cm in diameter. Each flower has a hairy corolla and calyx surrounding about 50 thin stamens united in a tube at the base. Flowering begins in 3-4 years and is seasonal (April in Hawaii). The pods are pinkish, 1-1.5 cm wide, about 12 cm long, and become spiral as they mature. Seeds are about 10 per pod (9,000 to 26,000/kg), black and shiny, hanging on a reddish thread from the pod. The pod splits along both margins.

DISTRIBUTION: This hardy American tree is native along coasts from California through Mexico to South America, but is now found throughout the tropics. Pithecellobium dulce followed the Spanish galleon route (with leucaenas, gliricidias and other nitrogen fixing trees) through the Pacific and Asia to Africa.

It is now common and naturalized in India and tropical Africa, especially along coasts. It is notably weedy in the Caribbean islands (including Cuba, Jamaica, Puerto Rico, and St. Croix), and in Florida and Hawaii, USA, but less so where population and animal pressure keep it contained.

ECOLOGY. Pithecellobium dulce thrives in dry warm climates where annual rainfall is 400 to 1650 mm. It is typical of lowlands, but can be found at elevations above 1,500 m in Mexico and East Africa. This species is found on most soil types, including clay, limestone, and sands. Pithecellobium species are noted for their tolerance of heat, salinity, and impoverished soils. They are also tolerant of drought conditions.

FOOD AND FODDER. Names like “dulce’ (sweet) and “Manila tamarind ” reflect the wide use of the pods as food. Pods contain a pulp that is variously sweet and acid. commonly white but also red. The seed and pulp are made into a sweet drink and eaten roasted or fresh. In India. the seeds are used fresh or in curries. The pods are relished by monkeys and livestock. The
flowers are attractive to bees as source of pollen. The resulting honey is of high quality. Although the pods are attractive fodder to most animals. the leaves are browsed but not considered an important animal fodder.

WOOD: The wood of P. dulce is strong and durable vet soft and flexible. It can be used in construction and for posts. The reddish-brown heartwood is dense and difficult to cut. It is commonly used as fuel. although due to smokiness and low calorific values (5,500 kcal/kg) it is not of high quality. The short spines and irregular. crooked growth make it less attractive for
wood uses.

OTHER USES: The tree is used extensively as a shade or shelterbelt tree with a great tolerance of arid and harsh sites. It coppices readily and can be managed as a hedge. Coppicing often increases the occurrence of thorns. This characteristic makes hedges of P. dulce excellent for livestock fences, but problematic for other uses.

Pithecellobium dulce is also very popular as an ornamental and is used in topiarv (plant sculpturing). Trees with variegated leaflets are available as ornamentals in Hawaii. When wounded, the bark exudes a reddish-brown gum similar to gum arabic that dissolves in water to make a mucilage. The bark can also be used for tanning and produces a yellow dye.
Seeds contain an oil that can be used in soap-making or as food, and the residue ran be used as animal feed. Medicinal uses are known but not common.

SILVICULTURE AND GROWTH: Seed viability is Long under dry cool storage. No pretreatment is necessary for seeds to germinate, although nicking may improve And hasten the process. Germination occurs quickly, Normally in 1-2 days. Application of Rhizobium inoculum To seeds is suggested prior to sowing. Successful propagation by cuttings has also bbeen reported.

Pithecellobium dulce normally competes successfully with other vegetation. It often establishes in grass ecosystems without the benefit of weed and grass control. Few data are available on its relative growth rate, but it appears to be intermediate in growth to the slower Prosopis spp. and the faster Leucaena spp. Height growth can reach 10 meters in 5-6 years under good environmental conditions.

SYMBIOSIS: Pithecellobium dulce forms root nodules with Rhizobium bacteria. Nodulation is common in all types of soil, but quantitative data on fixation has not been reported.

PESTS AND PROBLEMS: The sharp thin spines can be fierce on young shoots and often limit plant utilization. Spines are reportedly absent in some trees; pastures and cropland. P. dulce can be a tenacious weed. Coppice regrowth is rapid. and the tree is not easily killed once established.

The tree is evidently not deeply rooted and is subject to blow-down. Superficial rooting is not common in drier soils, thus blow-down is less of a problem under such conditions. The sap is said to cause irritating skin welts and severe eye irritation (the latter is common to sap or juice from many legume trees and their fruits). The heavy smoke created by burning limits its usefulness as fuelwood. Pests include the thornbug and several boring and defoliating insects.