NFTA 97-03, June 1997
A quick guide to useful nitrogen fixing trees from around the world

Pongamia pinnata (L.) Pierre has also been called Derris indica (Lam.) Bennet and Pongamia glabra Vent., all of these three names are still commonly found in literature. According to Lewis (1988), this species may eventually be transferred to genus Millettia. Pongamia pinnata is one of the few nitrogen fixing trees (NFTS) to produce seeds containing 30-40% oil. It is often planted as an ornamental and shade tree. This species is commonly called pongam, karanga, or a derivation of these nams. 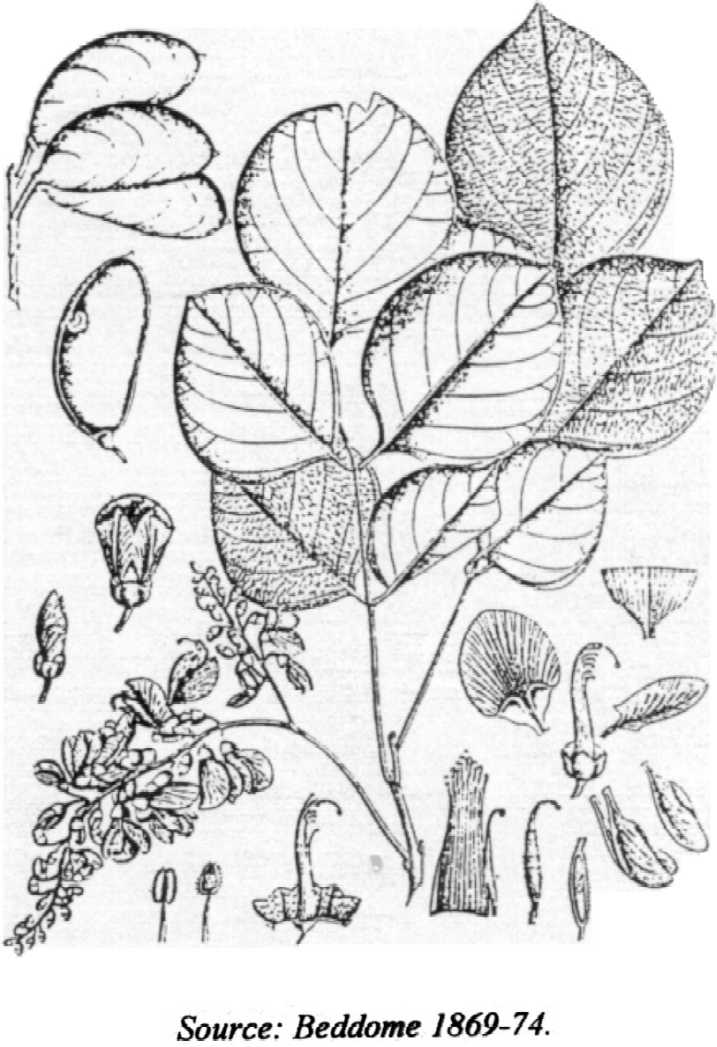 Botany
Pongam (Legununosae, subfamily Papilionoideae) is a medium sized tree that generally attains a height of about 8 m and a trunk diameter of more than 50 cm. However, Troup
(GOI 1983) reports trees attaining heights of 18 m. The trunk is generally short with thick branches spreading into a dense hemispherical crown of dark green leaves. The bark is thin gray to grayish- brown, and yellow on the inside (GOI 1983). The taproot is thick and long; lateral roots are numerous and well developed.

The alternate, compound pinnate leaves consist of 5 or 7 leaflets which are arranged in 2 or 3 pairs, and a single terminal leaflet. Leaflets are 5-10 cm long, 4-6 cm wide, and pointed at the tip. Flowers, borne on racemes, are pink, light purple, or white. Pods are elliptical, 3-6 cm long and 2-3 cm wide, thick walled, and usually contain a single seed. Seeds are 10-20 cm long, fig oblong, and light brown in color.

Ecology
Native to humid and subtropical environments, pongam thrives in areas having an annual rainfall ranging from 500 to 2500 mm. in its natural habitat, the maximum temperature ranges from 27 to 38°C and the minimum 1 to16°C. Mature trees can withstand waterlogging and slight frost. This species grows to elevations of 1200 m, but in the Himalayan foothills is not found above 600 m (GOI 1983).

Pongam can grow on most soil types ranging from stony to sandy to clayey, including Verticals. It does not do well on dry sands. It is highly tolerant of salinity. It is common along waterways or seashores, with its roots in fresh or salt water. Highest growth rates are observed on well drained soils with assured moisture. Natural reproduction is profuse by seed and common by root suckers

Distribution
The natural distribution of pongam is along coasts and river banks in India and Burma. Native to the Asian subcontinent, this species has been introduced to humid tropical lowlands in the Philippines, Malaysia, Australia, the Seychelles, the United States (Little undated), and Indonesia.

Uses
Wood. With a calorific value of 4600 kcal per kg, pongam is commonly used as fuelwood. Its wood is beautifully grained and medium to coarse textured. However, it is not durable, is susceptible to insect attack, and tends to split when sawn. Thus the wood is not considered a quality timber. The wood is used for cabinet making, cart wheels, posts (NAS 1980), agricultural implements, tool handles and combs (GOI 1983).

Oil. A thick yellow-orange to brown oil is extracted from seeds. Yields of 25% of volume are possible using a mechanical expeller. However, village crushers average a yield of 20% (ICFRE, undated). The oil has a bitter taste and a disagreeable aroma, thus it is not considered edible. In India, the oil is used as a fuel for cooking and lamps. The oil is also used as a lubricant, water-paint binder, pesticide, and in soap making and tanning industries. The oil is known to have value in folk medicine for the treatment of rheumatism, as well as human and animal skin diseases. It is effective in enhancing the pigmentation of skin affected bv leucoderma or scabies (ICFRE undated).

Fodder and feed. Opinions vary on the usefulness of this species as a fodder. Troup (GOI 1983) reports that the leaves are eaten by cattle and readily consumed by goats. However, in many areas it is not commonly eaten by farm animals. Its fodder value is greatest in arid regions. According to Singh (1982) the leaves contain 43% dry matter, 18% crude protein, 62% neutral detergent fiber, 40% acid detergent fiber, and in vitro dry matter digestibility of 50%. The presscake, remaining when oil is extracted from the seeds, is used as a poultry feed.

Other uses. Incorporation of leaves and the presscake into soils improves fertility. Dried leaves are used as an insect repellent in stored grains. The presscake, when applied to the soil, has pesticidal value, particularly against nematodes. String and rope can be made from the bark fiber.

Pongam is often planted in homesteads as a shade or ornamental tree and in avenue plantings along roadsides and canals. When planted as a shade or ornamental tree, branch pruning may be necessary to obtain a trunk of appropriate height. It is a preferred species for controlling soil erosion and binding sand dunes because of its dense network of lateral roots. Its root, bark, leaf, sap, and flower also have medicinal properties.

Silviculture
Pongam is easily established by direct seeding or by planting nursery-raised seedlings or stump cuttings of 1-2 cm root-collar diameter. Propagation by branch cuttings and root suckers is also possible. In peninsular India, the seeding season is April to June, and the seed yield per tree ranges from about 10 kg to more than 50 kg. There are 1500-1700 seeds per kg. Seeds, which require no treatment before sowing, remain viable for about a year when stored in air-tight containers.

Seed germinates within two weeks of sowing. Seedlings attain a height of 25-30 cm in their first growing season. Transplanting to the field should occur at the beginning of the next rainy season when seedlings are 60 cm in height (GOI 1983). Seedlings have large root systems. Soil should be retained around the roots during transplanting. Seedling survival and growth benefit from annual weed control for the first three years after transplanting.

The spacing adopted in avenue plantings is about 8 m between plants. In block plantings, the spacing can range from 2 x 2 to 5 x 5 m. Pongam seedlings withstand shade very well and can be interplanted in existing tree stands. This species can be regenerated bv coppice management. Information on management practices to maximize seed or biomass production is not available and should be investigated. Because it tolerates moderate levels of salinity, pongam is an ideal candidate for saline soil reclamation.

Symbiosis
Nodulation is reported in pongam (Dayama, 1985). In nurseries and in the field the presence of nodules on uninoculated pongam, seedlings is common. Therefore, this species may not be specific in its Rhizobium strain requirement.

Limitations
Pongam attracts many pests and diseases. Some of the important pests are Parnara mathias, Gracillaria sp., Indarbela quadrinotata, Myllocerus curvicornis, and Acrocercops sp. (Anon. 1994). Attacks by these insects cause whitish streaks and the formation of galls on affected leaves. The lateral spread of roots of this species, about 9 m in 18 years, is greater than most other tree species (Misra and Singh 1987). Moreover, it produces root suckers profusely. Because of these characteristics, pongam is unsuitable for agroforestry and has the potential to become a weed if not managed carefully.