Prosopis alba and Prosopis chilensis are native to the semi-arid regions of north- western Argentina and northern Chile. Locally they are called el arbol or, the tree, because of their widespread occurrence and importance. Since these species have often been confused in the literature, it is useful to treat them together. Once leaf patterns have been observed, differences between species become obvious. 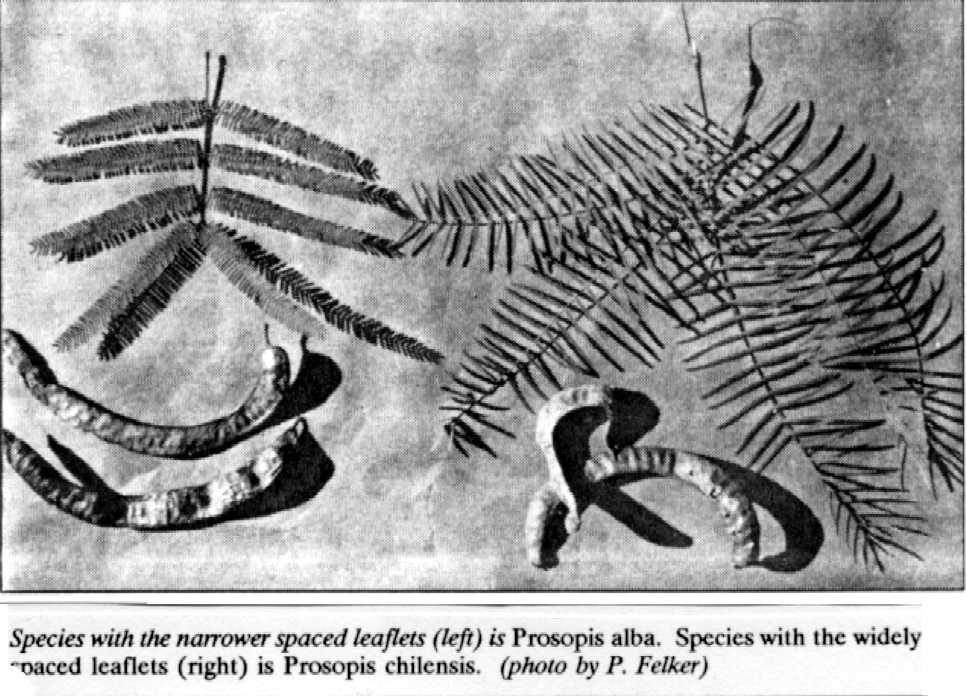 BOTANY
Prosopis alba (Grisebach) and P. chilensis (Molina Stuntz) (subfamily Mimosoideae, family Leguminosae) are small to medium-sized trees up to 12 m in height and 1 m in diameter. Both species have thorny and thornless variants. The most distinguishing feature between the two are the number and spacings of leaflets.

The trees have compound leaves each with numerous leaflets along several pairs of pinnae. P. alba usually has 2-3 pairs of pinnae (but up to 4 or 5) with 30-50 sets of 10 min long leaflets per pinnae (Burkart 1976). P. chilensis generally has fewer leaflets per pinnae (about 10-29) and usually no more than two pair of pinnae per leaf. In P. alba, the 1-2 mm wide leaflets nearly touch the pinnae, while in P. chilensis, leaflets are about 1 cm apart.

Abundant, greenish-white to yellow flowers occur on spike-like racemes. Pods of both species are beige to off-white, from which the species name alba, or white, originates. In contrast, other Argentine species have red-tinged to dark purple pods (P. flexuosa and P. nigra).

The pods of P. alba are typically 20 cm long, 4-5 mm thick, and 20-25 mm wide. They are sickle-shaped with the entire pod occurring in the same plane. Although P. chilensis pods are the same color, they are shorter (about 15 cm) and not as wide (about 15 mm). The pods of P. chilensis are seldom flat and have a tendency to be rolled up along the long axis. P. alba pods also usually have a thicker mesocarp indicating a greater pod sugar content. The name P. chilensis has been incorrectly applied to the North American species P. glandulosa and P. velutina and to the naturalized P. juliflora that occurs in the Sudan.

ECOLOGY
Over 20 species of Prosopis occur in the semiarid and and regions of northwestern Argentina, making Argentina the center of genetic diversity for Prosopis, although probably not the center of origin (Burkart 1976). P. alba is native to the plains and low sierra of subtropical Argentina, extending into Uruguay, Paraguay, southern Brazil, and Peru (Burkart 1976) up to 1,500 m elevation.

In Argentina, P. chilensis grows in regions that experience lower winter temperatures and lower rainfall than P. alba
(E. Marmillon, pers. comm.). In areas with groundwater between 3 and 10 m below the surface, such as in drainage channels and along groundwater sinks, P. chilensis may occur in areas with less than 250 mm rainfall. If no groundwater is available, annual rainfall must exceed 350-400 mm for large trees (25-100 cm diameter) to occur. Trees of both species have been identified that grew in seawater salinity (Rhodes and Felker 1987).

Over most of the trees’ range the climate is subtropical with annual temperatures averaging about 20° C. In northern Argentina along the border with Paraguay, the frosts are light (-3 or -4° C), but further south near Cordoba occasional frosts of -12° C occur. When grown in Texas, nearly all spineless trees of P. alba froze, to ground level with frosts of -l2oC. Both species occur m areas that experience 45° C, so high temperature stress is not a problem.

USES. Wood: The wood of these trees is relatively dense (about 700-800 kg/m3) and makes an excellent fuel whether burned directly or first converted to charcoal (Tortorelli 1956). The timber is valued for furniture, doors, cobblestones, and parquet floors. The reddish/brown wood has a volumetric shrinkage much lower (ca. 5%) than that of other quality furniture woods (ca. 15%). As a result, joints in furniture have much less tendency to open during conditions of changing humidity.

Fodder. The pods but not the leaves of the trees are readily eaten by domestic livestock. Pods are high in sugar (about 35%) (Oduol et al. 1986) and contain 10-12% crude protein. Seeds are sometimes ground into a concentrate for animal feed. Large trees, 40 cm in basal diameter and 7 m in canopy diameter, may produce 40 kg of pods under optimal conditions. Because of water constraints, tree spacings must be considerably greater than canopy diameters.

Food: The pods of both trees are eaten by native peoples, especially as a ground flour. Contemporary milling techniques and product formulations with, Prosopis flour has been described (Sounders et al. 1986). Bees produce honey from the flowers.

Other uses: The large size of the trees and more rapid growth than other Prosopis (e.g., P. glandulosa) have led to widespread use of P. alba and P. chilensis for shade, windbreaks, and as ornamentals in Argentina and in Arizona and California, USA. They also contribute nitrogen and organic matter to soils (Johnson and Mayeux 1990). These trees are candidates for erosion control and soil stabilization in and lands.

SILVICULTURE. Establishment: Seeds are difficult to extract from the gummy pulp. Prosopis pods can be ground in a meat grinder after drying pods in an oven at 52oC overnight, which will also serve to scarify the seeds. For good germination seeds require scarification of the seed coat with a file or knife. There are about 36,000 seed/kg.

PROBLEMS AND PESTS. Twig girdling insects (Oncideres spp.) cause minor damage to these trees. An undescribed “disease” causes the terminal shoots to die. Over a period of years this necrosis gradually spreads downward and eventually may kill the entire tree. These Prosopis can become weeds in heavily grazed areas.

Johnson, H.B. and H.S. Mayeux. 1990. Prosopis glandulosa and the nitrogen balance of rangelands: extent and occurrence of modulation. Oecologia 84:176-185.