NFTA 91-04, July 1991
A quick guide to useful nitrogen fixing trees from around the world

Prosopis cineraria is a versatile species, providing fodder, fuel for timber, and shade, as well as affecting soil improvement and sand dune stabilization. It is commonly used in dryland agroforestry in India and Pakistan. The tree is known locally as jandi or khejri (India), jand (Pakistan), and ghaf (Arabic). Its synonym is P. spicigera. 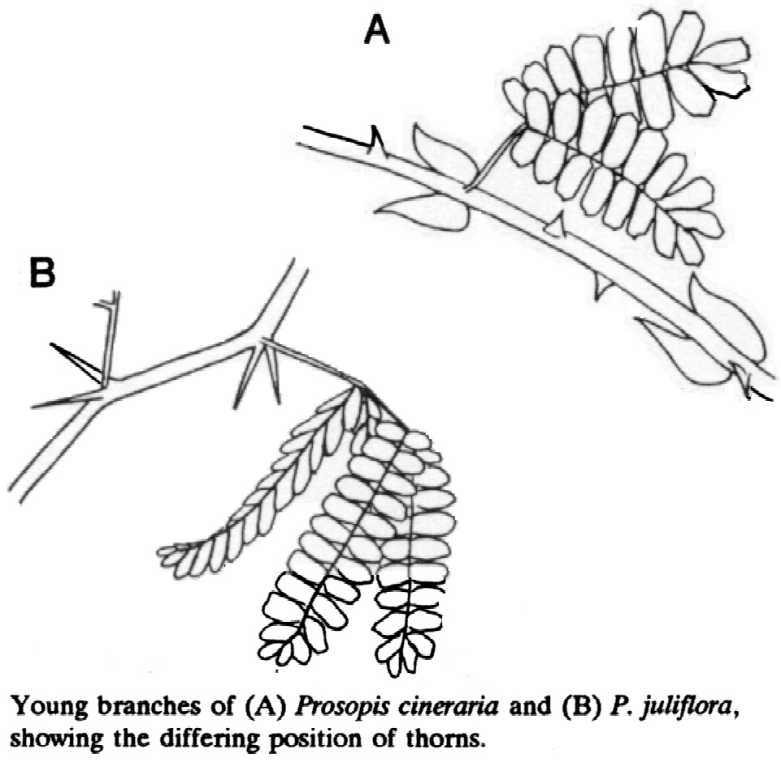 Botany
Prosopis cineraria (L.) Druce (family Leguminosae, subfamily Mimosoideae) is one of 44 species of leguminous trees and shrubs in the genus. It is a small thorny, irregularly branched tree, 5-10 in high. Evergreen or nearly so, it forms an open crown and has thick, rough gray bark with deep fissures.

Leaves are alternate, bipinnately compound with 1-3 pairs of pinnae. Each pinna has 7-14 pairs of leaflets, 4- 15 mm long and 2- 4 mm broad. The thorns are straight with a conical base and distributed sparsely along the length of the stem. They first become visible when the seedlings are 6-8 weeks old. In this respect, P. cineraria differs from the thorny New World species of Prosopis (e.g., P. juliflora) which have thorns in pairs at the nodes but thornless internodes.

Ecology
P. cineraria occurs naturally in the dry and and regions of India, Pakistan, Afghanistan, Iran, and Arabia. It is one of the principal species on higher and older alluvium in the Indus river valley. It is extremely drought tolerant, growing in areas with as little as 75 mm annual rainfall generally 150-400 mm (FIN 1991), with dry seasons of eight months or more (NAS 1980).

Slightly frost hardy and tolerant of temperatures up to 50oC, it grows at altitudes from sea level to 600 m. The tree is found in alluvial and coarse, sandy, often alkaline soils where the pH may reach 9.8. In vitro studies have confirmed the modulation of P. cineraria with Rhizobium.

In areas such as the Wahiba Sands in Oman there exist isolated, ancient P. cineraria trees. It also grows gregariously on sand. Under less extreme conditions, P. cineraria, often in association with Acacia tortilis, may form open dry, woodlands, which are important communities within the desert ecosystem. There is considerable phenotypic variation between individuals in crown shape, growth rate, and branching. Ecotypes growing in highly saline coastal areas have also been identified.

Fodder: The leaves are an available, excellent, and nutritious fodder, readily eaten by many animals including camels, goats, and donkeys. The tree produces leaves during the extremely dry summer months when most other trees are leafless. Leaves contain 13.8% crude protein, 20% crude fiber, and 18% calcium (FFN 1991). The pods also provide a good fodder, containing a dry, sweet pulp.

Food: Pods are eaten as a vegetable in the human diet in some areas. In Rajasthan, green pods called sangri are boiled and dried (FFN 1991). The flowers are valuable for honey production. The bark can be used in leather tanning and yields an edible gum. Bark and flowers are used medicinally (NAS 1980). In times of famine, the powdered bark has been mixed with flour and made into cakes (Bhandari 1978). 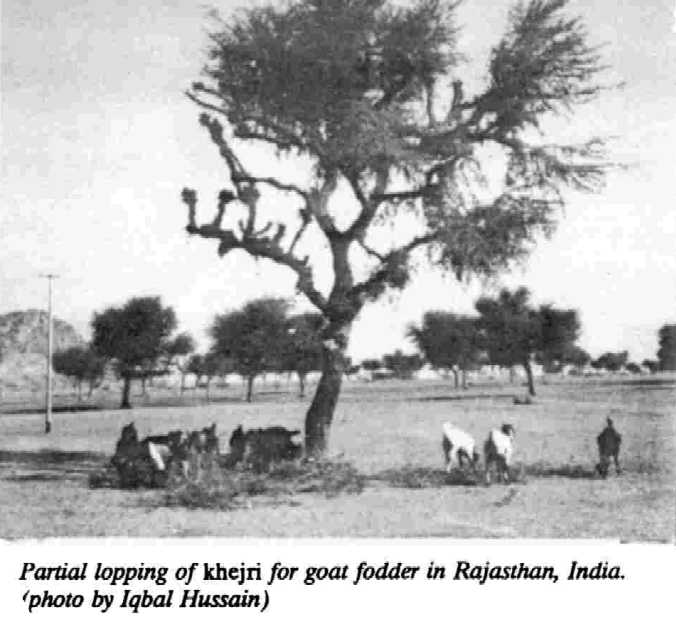 Land use: P. cineraria effectively stabilizes sand dunes and can withstand periodic burial (Gates and Brown 1988). Because of a deep taproot, trees are not believed to compete for moisture or nutrients with crops grown close to the trunk. During the growing season it casts only light shade and is therefore suitable as an agroforestry species. Farmers in and and semi-arid regions of India and Pakistan have long believed it to increase soil fertility in crop fields. Yields of sorghum or millet increased when grown under P. cineraria, as a result of higher organic matter content, total nitrogen, available phosphorus, soluble calcium, and lower pH (Mann and Shankarnarayan 1980). Other crops traditionally grown amid scattered khejri are maize, wheat, and mustard.

SILVICULTURE. Seeds (25,000/kg) remain viable for decades in dry storage and establish well with 80-90% germination (Mahoney 1990). Soaking seeds in tepid water for 24 h is recommended as a pre-germination treatment. The round end of the seed may also be scarified by scratching or nicking with a file or knife.

P. cineraria is difficult to propagate by cuttings, although treatment with rooting hormones has proved successful in India. Propagation by root suckers and by air layering has been reported. Recent attention has also been given to micropropagation of this species, but it appears that in vitro propagation is more difficult with P. cineraria than with many other Prosopis species. The tree is also considered slower growing than other Prosopis.

Seedlings are raised in a nursery and transplanted when 2-3 months old at the onset of the rainy season. Trees can be planted in close lines as a hedge with I m spacing between trees (Mahoney 1990), but tree densities of 50-100/ha are recommended for both agroforestry and silvopastoral systems. One or two weedings are necessary during the first year owing to slow initial growth rate. Early pruning to encourage straight growth is recommended (NAS 1980). The tree responds well to irrigation, tolerating up to 50% sea water.

The tree coppices readily (NAS 1980). Maximum yields of fodder are obtained when the trees are pollared on a three-year-rotation. Villagers traditionally lop their trees in winter and store the sun-dried leaves for dry season fodder.

RESEARCH. Although P. cineraria plays a vital role as an agroforestry species in some parts of its natural range, little success has been achieved in planting it elsewhere. Further work is needed to establish the range of conditions under which it might prove useful. P. cineraria displays considerable genetic variation, particularly in populations close to the edge of its natural range, which are often threatened by overgrazing. Genetic conservation of this valuable resource is considered a priority.

LIMITATIONS. Desert locusts (Shistocarica gregaria) and Melolonthidae beetles attack the foliage, and bruchid beetles feed on the mature dried seeds. Termites (Odontoteomen obesus), white grubs (Halorachia spp.), and the gallfly (Goccidomulid galli) are also important pests. There is little information on diseases of P. cineraria. This NFT is not suitable for planting in riverine areas or subhumid environments where it can become an aggressive colonizer and spread rapidly.

Leakey, R.R.B. and F.T. Last. 1980. Biology and potential of Prosopis species in and environments with particular reference to P. cineraria. J. Arid Environments 3:9-24.