NFTA 87-05, October 1987
A quick guide to useful nitrogen fixing trees from around the world

Some trees must be valued simply because ‘they are there,’ filling important vacuums in nature. The hostile environment this scraggly tree occupies is hot, dry and saline. Under these conditions, Prosopis pallida and its sister species produce nutrient rich pods for animals and the world’s finest charcoal. They also fix nitrogen to enrich the soil around them.

Native to incredibly dry coastlines of Peru and Ecuador, P. pallida was spread in the 19th century to African and Pacific nations and later throughout Asia. It often dominates arid, saline coastlines, while other saline-tolerant trees like the casuarinas are riverine or restricted to shores with subsoil moisture. The tiny leaflets presumably intercept fog to obtain much of their moisture along S. American coasts. 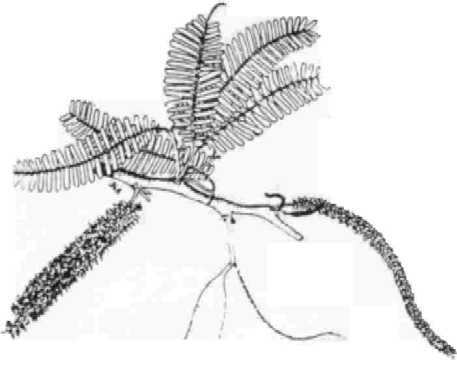 BOTONY:
P. pallida (H. & B. ex Willd.) H.B.K. is one of about 40 species of this genus many of them quite similar. It is much like P. juliflora (Sw.) DC., a smaller Central American tree now widespread internationally and often weedy (Burkart 1978). Common names include ‘kiawe’ (Hawaii) and ‘algarrobo’ (S. America). Its better known temperate relatives are called “mesquite” it is a wide-spreading tree to 18 m in height and 80 cm in diameter with sinewy branches reminiscent of twisted ropes. On poor sites it is shrubby. Spikes of small pale-yellow mimosoid flowers are followed by abundant tan pods 12-24 cm in length. Most trees have sharp spines, but about 12% of Hawaii’s trees are thornless.

FUELWOOD AND CHARCOAL:
Prosopis spp. are justly famous for charcoal and fuelwood (marketed as “mesquite” from related temperate species). Kiawe’s wood is very dense (old trees to .85 specific gravity) and is challenging to cut but burns slowly almost smokeless and with little ash (NAS 1980). Its charcoal is superb.

WOOD:
Heartwood of kiawe is dark reddish-brown and sapwood is light yellow. It is used for fence posts that are durable and decay-resistant but susceptible to termite attack. Although dense and strong the wood is relatively easy to work (eggs mallets).

FODDER:
Mature pods of P. pallida produced annually, are sweet and high in energy with adequate digestibility and protein (12%). Pods can thus form a significant dry season fodder after grasses have dried down. When pods are fed as an exclusive diet, however cattle become malnourished and lose weight. Trees are largely cross-pollinated, and produce few pods when grown in isolation. The sparse thorny foliage is not a good fodder, and seeds are indigestible.

HONEY AND FOOD:
Kiawe is a source of nectar that makes an excellent honey that was once a major commercial product of Hawaii (Neal 1965). Trees flower seasonally in dry areas, but may flower for longer periods when rooted in subsoil moisture. Pods of kiawe are sweeter than most other species. They can be made into a syrup, “algarrobina,” as a natural thickening for foods and beverages. They are reported also to serve as a medicinal for dysentery.

OTHER USES:
The principle use of kiawe is as cover for erosion control on arid land and shifting dunes. Thornless trees should be carefully chosen for beach parks; a thornless composite is being produced in Hawaii. Bark has been used for tanning, and exuded stem gums for glue and varnish.

ECOLOGY:
Most Prosopis spp. tolerate drought and thrive under 250-600 mm of annual rainfall, although growth improves greatly with more moisture. Rooting is commonly shallow and spreading but can be deep in arid soils. Trees do not tolerate frost.

PRODUCTION:
Kiawe has not been widely planted. Seeds should be scarified (nicking, hot water) for best germination. Seedling growth is very slow, to 1 m annually. Natural reseeding of the species is common in low-rainfall regions with saline soils. Trees survive coppicing, but may grow back as many-branched shrubs.

PESTS AND PROBLEMS:
The bruchid beetle (Algarobius prosopis) often invades kiawe pods. Several other insects including psyllids, can defoliate trees. Posts of kiawe are durable, but are subject to attack by teredos, a shipworm, when used as pilings in the water. Rooting is shallow in many soils and windstorms can topple the trees. Growth is very slow compared to other trees under adequate moisture conditions. Trees rarely survive slow fires. Trees appear highly variable genetically and are almost uniformly poor in form. Taxonomy is debated, and the relationships of P. pallid and P. juliflora needs clarification.

Contact author J.L. Brewbaker and staff of NFTA in Hawaii for abstracts of references cited, or further information and seeds.