FACT 99-03, June 1999
A quick guide to multipurpose trees from around the world

Pterocarpus erinaceus is a deciduous legume tree of African savannas and dry forests famous for producing one of the finest woods in its native region. It also produces leafy fodder high in protein, which makes an excellent animal feed crucial for the survival of livestock during the dry season. The tree produces showy and attractive golden-yellow flowers and has considerable potential as an ornamental. Increasing demand for its high-value timber and fodder threatens existing natural stands. However, the tree fruits abundantly and is easy to propagate, making it a good candidate for reforestation programs. 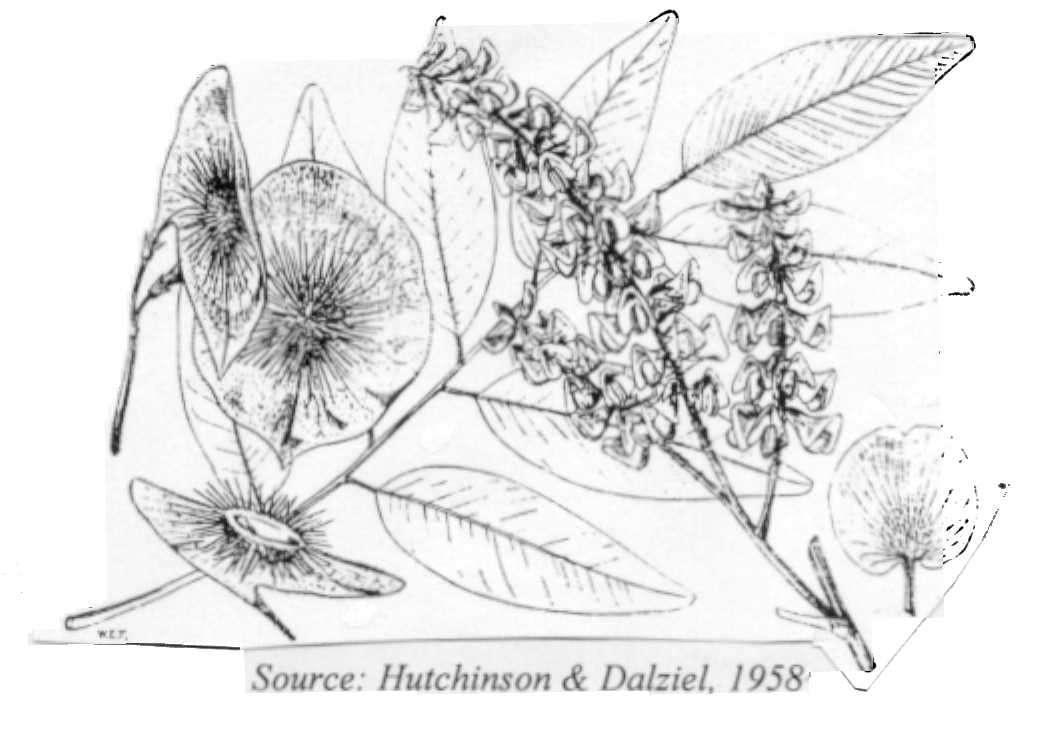 Botany
Pterocarpus erinaceus Poir. (Leguminosae, subfamily Papilionoideae) is a small to medium-sized tree 12–15 m tall with a diameter of 1.2–1.8 m. In the drier part of its range it has an open, spreading form and is low-branching, but under favorable rainfall and soil conditions, much larger specimens with clean straight boles 6–8 m long or more can be found (Lely 1925). Exceptionally tall trees reaching 35 m height have been reported (von Maydell 1983). The bark of the trunk is dark gray and rough, with scales that curl up at the ends. Its branches are light gray and smooth. The leaves are once-compound, imparipinnate, and 30 cm long. There are 10–15 alternate or subopposite leaflets, 6–11 cm long and 3–6 cm wide (Hutchinson et al. 1958, Lely 1925). The flowering tree is showy and very attractive, with masses of golden-yellow flowers that completely cover the canopy. In its native range, Pterocarpus erinaceus flowers from December to February (ICRAF 1998). The fruit is 4–7 cm in diameter, indehiscent, and broadly winged, giving it a “flying saucer” appearance. “Pterocarpus” means “winged fruit,” from the Greek “pteron” (wing) and “karpos” (fruit). The young fruits are light green and turn light brown when dry. The seeds are kidney-shaped to oblong.
Pterocarpus erinaceus has been referred to as Pterocarpus angolensis DC and Pterocarpus echinatus DC. It is known under many common names including vene, madobia, and kino.

Ecology
Pterocarpus erinaceus is found in open dry forests of semiarid and subhumid lands with mean annual rainfall of 600–1200 mm and a moderately to very long dry season that can last 8–9 months. Mean annual temperature in the tree’s natural range is 15–32ºC, but it tolerates high temperatures reaching over 40ºC. The tree grows at low altitudes (0–600 m) and thrives even on shallow soils. It is drought tolerant and once established it survives yearly dry seasons. It also survives the yearly savanna bush fires and readily colonizes fallow lands. Parkia biglobosa and P. erinaceus are believed to be surviving species of the former dense, dry forest of the sudanian zone (Aubreville 1950).

Distribution
Pterocarpus erinaceus is found throughout West and Central Africa, ranging from Senegal in the west to the Central African Republic in the east. It is distributed up to 14ºN but is a stunted, small tree at this latitude, where another species, Pterocarpus lucens, takes over and becomes more abundant. Southward, the range extends to the limit of the humid forest in Cote d’Ivoire and the humid coastal savannas in Guinea, Togo, and Benin, where a gallery-forest species, Pterocarpus santalinoides, is common along rivers and temporary watercourses. The species is not known to have been introduced outside its native region.

Uses
Wood and wood products. Virtually unknown to commerce outside of its native range, Pterocarpus erinaceus provides some of the finest wood from dry forests of the region. The wood is a beautiful, rich rose-red or dark brown, mottled with dark streaks (NAS 1979). It has a handsome, fine-grained appearance and is used for furniture (including stools and benches), decorative paneling, and parquet flooring. It is also used as construction wood and in carpentry for doors and window frames. It makes very good charcoal, which is highly valued by local blackmiths.

Leaf fodder silvopastoral systems. Pterocarpus erinaceus provides high-quality leaf fodder with an average nutritive value in dry matter of 5.3 MJ kg-1 net energy, 16–19% crude protein, and 0.15% phosphorus. Pastoralists traditionally lopped wild trees in silvopastoral systems to feed their livestock during the dry season. Increasingly, this fodder is brought to urban and semi-urban markets for sale. In Bamako, the capital city of Mali, more than 1400 tons of fresh pterocarpus leaves are sold annually to feed urban livestock, especially sheep. This supply is far short of the demand; 7500-–8000 tons is needed annually to feed the estimated 11,000 sheep in the city (Anderson et al 1994). Because of the huge demand, the tree is so heavily lopped that it is now difficult to find in the periphery of Bamako, where it used to be readily available. Vendors of pterocarpus fodder are now forced to travel up to 50 km to find trees that still have leaves to harvest (ICRAF 1997, Bonkoungou et al. 1998).

Agroforestry fodder bank. Pterocarpus erinaceus is a good species for fodder bank technology, which involves intensive coppicing through periodic cuttings. A pterocarpus fodder bank trial established at Nyenkentoumou (800 mm annual rainfall) in Mali by the International Centre for Research in Agroforestry (ICRAF) and their national partners shows that the species resprouts well when cut at a height of 50 cm at the end of the rainy season and remains green in the dry season. Trees do not resprout well when cut at ground level (ICRAF 1997). Results of biomass production from the trial indicate that a 0.25 ha fodder bank of pterocarpus can feed a herd of 6 tropical livestock units (1 TLU is equivalent to 250 kg animal live weight).

Other uses. Medicinal uses are many, including the use of leaves as a febrifuge, the bark for tooth and mouth troubles, and bark and resin as astringent for severe diarrhea and dysentery. The grated root is mixed with tobacco and smoked in a pipe as a cough remedy. The resin, kino, is used for dyeing cloth to produce a dark purple color.

Siviculture
Propagation. Pterocarpus erinaceus is a prolific seed producer and is easy to propagate by planting nursery-raised seedlings or rooted cuttings. The fruit, an indehicent pod, must be cracked open. There are about 3500 unshelled seeds per kg (19,800 per kg if shelled). The recommended seed pretreatment is immersion in water at room temperature for 18–24 hours, or in sulfuric acid for 30–60 minutes and then in tap water for 5–10 minutes (Roussel 1996). Germination occurs within 6–10 days. Seeds are sown in pots (2–3 seeds per pot) or in nursery beds at spacing of 20 x 30 cm or 30 x 30 cm. Watering is done twice a day, morning and late afternoon, at 10 liters per 20 m2 of planted area. Seedlings develop a deep taproot, which must be pruned frequently, first done 6 weeks after seed sowing, then every 3 weeks afterwards. Outplanting can be done with both potted seedlings and bare-root seedlings, as stumps or entire seedlings. Rate of survival is high, but growth is slow. Diakité (1991) reported a yearly height increment in Mali of 11–15 cm during the first year and 25–42 cm the second year. The recommended size for the planting hole in dry zones is 40 x 40 cm at 5 x 5 m spacing for woodlots or 1 x 2 m for fodder banks.

Limitations
Seedlings must be well protected against rodents and crickets. Newly established plantations require 4–5 years protection from browsing by livestock and wildlife. Although the species survives yearly bush fires, frequent and severe burnings may permanently scar the trunk.

Research
Strong intraspecific growth differences have been observed in several trials with P. erinaceus, suggesting possible genetic variability (ICRAF 1997). Domestication research to characterize the extent of variation and to develop low-cost propagation techniques is needed. The management of trees in woodlots and fodder banks is not well documented. Research to investigate the specificity of the P. erinaceus-Rhizobium symbiosis and the quantity of nitrogen fixed in different management systems is also needed.