NFTA 92-02, March 1992
A quick guide to useful nitrogen fixing trees from around the world 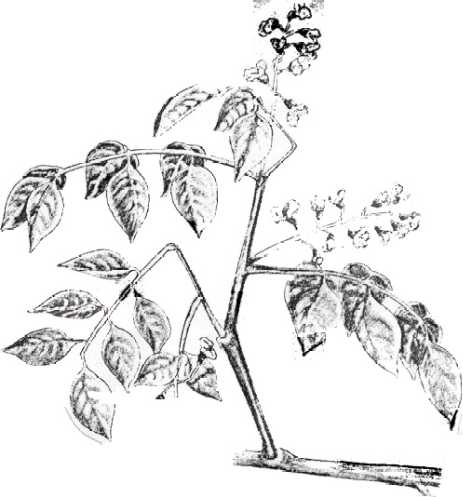 Pterocarpus indicus foliage and flower, taken from Plants of the Philippines (1980).

Botany
Pterocarpus indicus Willd. (Leguminosae, subfamily Papilionoideae) is a big tree, growing to 33 m in height and 2 m diameter. The trunks are usually fluted and buttressed to 7 m diameter at the base. The crowns are large and bear many long branches that are at first ascending, but eventually arch over and sometimes droop at the ends. Trees with long willowy, drooping branches are particularly conspicuous and attractive in Singapore and some parts of Malaysia and Hawaii. Elsewhere the drooping habit may not develop.
The leaves are compound-pinnate, bearing 6-12 alternate leaflets. The leaflets are rather large, 7 x 3.5 to 11 x 5.5 cm and ovate to elliptic in shape, with a pronounced acuminate tip. The flowers are yellow, fragrant, and borne in large axiuary panicles. When flowering, the buds do not open in daily sequence. Instead, as buds come to full size, they are kept waiting, to be triggered into opening.

The opened flowers last for one day. After that, several days may pass before another batch of accumulated ‘ready’ buds open. The nature of the trigger is unknown. Whole avenues of such trees blooming in unpredictable synchrony making a splendid display. Local drivers have learned to slow down on the flower-carpeted roads to avoid skidding. The fruits, which take four months to mature, are disc-shaped, flat, and have winged margins. About 5 cm across, the fruit have a central woody-corky bulge containing several seeds (ptero-carpus means winged fruit). Unlike most legumes, the Pterocarpus fruit is indehiscent and dispersed by wind. It also floats in water and can be water-dispersed.

There are 1-3 seeds in each fruit. The seeds are difficult to extract, but will germinate readily through built-in weaknesses in the fruit wall; hence each fruit is able to function like a seed, but produces 1-3 seedlings. There is no advantage to extracting the seeds because the germination time and percentage are practically the same between whole fruits and extracted seeds.

In a non-seasonal humid tropical climate such as in Kuala Lumpur and Singapore, the trees are generally evergreen, but in regions with seasonal rainfall, the trees are deciduous.

Distribution. The genus Pterocarpus consists of 20 species distributed throughout the tropics (Rojo 1977). P. indicus has a wide range from southern Burma to the Philippines and throughout the Malay Archipelago to New Guinea and the Solomon Islands. There is considerable morphological and ecological variation when viewed throughout its range, but because of extensive clonal propagation, the trees planted in any given locality tend to be uniform. In Malaysia, its natural habitat is by the sea and along tidal creeks and rivers. Elsewhere (e.g., Papua New Guinea), it occurs in inland forests. In the Moluccas (Manupatty 1972- 1973), four varieties are locally recognized, which occupy a range of habitats from the coast to subnmontane forests and seasonal swamps.

Propagation. P. indicus may be propagated by seed, which germinate in 8-100 days, but the initial growth of seedlings and saplings is relatively slow. Propagation by cuttings is preferred, especially for ornamental planting (Wong 1982). P. indicus is unique among big timber trees in that the capacity for rooting of stem cuttings is not lost with age. Stem cuttings can be taken from trees of any age and size. Indeed, cuttings of diameter 6 cm or larger will root better than cuttings of smaller diameter. Young leaf-bearing stems will not root at all. For roadside planting, the cuttings used are in the form of stakes 1.5-3 m long and as much as 10 cm diameter. Such stakes produce up to 10 radiating shoots at the top, making a symmetrical crown very quickly, above pedestrian height. Few species can match P. indicus in the ability to produce well-crowned instant trees within one or two years. If large stakes fail to root, it is usually because of water-logging or accidental movement of the stakes during the tender rooting period. These problems can be avoided by rooting the stakes in loamy soil in large well-drained containers, while tied securely to a simple supporting framework. The stakes root in about 3 months and can be reduced to as short as 10 cm length, but such cuttings would take longer to develop into trees.

Timber. The timbers of all species of Pterocarpus are highly valued. P. indicus timber is moderately hard (.52 specific gravity), moderately heavy, easy to work, pleasantly rose-scented, takes a fine polish, develops a range of rich colors from yellow to red and has conspicuous growth rings, which impart a fine figure to the wood. Remarkably, such growth rings are developed even in the non-seasonal humid tropics. In Java and the Moluccas, giant burrs on the stem give rise to finely figured gnarl wood (also called wavy or curly wood). In the Moluccas, P. indicus is also the source of linggua kasturi, a highly valued red wood with the scent of sandalwood (Burkill 1935); this is perhaps a pathological condition. Traditionally, Pterocarpus has been so much in demand for cabinet class furniture that nearly everywhere its existence in the wild is precarious.

Silviculture. P. indicus behaves like a pioneer and grows best in the open. Seedlings are slower growing than cuttings and exhibit considerable variation in vigor. A strict cuuing program would be necessary to ensure that only the best stocks are planted out. Rooted cuttings can be established readily on nearly all kinds of soils, from coastal sands to inland clays, in urban and garden situations, and even in quite small planting holes dug into pavements. However, establishment trials in forest areas have had mixed results and some have failed. The reasons are not clear.

With a little practice, it is easy to distinguish a healthy tree by its luxuriant foliage from one that is thinly leafed and stressed. Under favorable conditions, trees in Singapore have been known to grow an average of 13.3 m in height and 1.55 m in girth in 11 years, or an average annual increment of 1.2 m height and 14 cm girth. Urban trees in Singapore are fertilized with compound fertilizer at the rate of 0.5, 1, and 1.5 kg per tree per annum in the first, second, and third years of growth. Subsequently, they get 3-5 kg per tree per annum depending on their size. The fertilizer is spread evenly on the soil under the tree crown and is applied once a year. Where the area of the soil is smaller than the crown (e.g., for trees planted in pavements and road dividers), the fertilizer is divided into two or more smaller applications (Wong 1982). As an urban tree, P. indicus is relatively wind-firm and seldom suffers branch breakage.

Pests and diseases. P. indicus trees in Singapore and Malaysia suffered extensively from an unknown disease between 1875 and 1925. The leaves of affected trees wither4 the branches died back, and after 2-3 months the whole tree would die (Corner 1940). Sometimes, whole avenues were wiped out. Strangely, the disease then disappeared and has not recurred. There are at present no serious pests and diseases.

Other species of Pterocarpus. Other well-known species are P. dalbeigioides of the Andamans Islands in the Bay of Bengal, P. marsupium of India and Sri Lanka, P. macrocarpus of Burma, Thailand, and Indo-China, P. officinalis of tropical America, and P. soyauxii of Africa. The silviculture of some of these has been described by NAS (1979).