FACT 99-04, June 1999
A quick guide to multipurpose trees from around the world

Senna siamea Lamk. (synonyms: Cassia siamea Lamk., C. florida Vahl.; Senna sumatrana, Roxb.) is a nonnitrogen-fixing leguminous tree in the subfamily Caesalpinoideae of the family Leguminosae. It has been widely planted in many Southeast Asian countries for erosion control, windbreaks, shelterbelts, fuelwood, and polewood. It is a good ornamental tree for planting along roadsides, and it is also used in alley cropping, intercropping, and hedgerows. It is planted as a shade tree in cocoa, coffee, and tea plantations. It is commonly called Thailand shower, minjiri, or kassod and has many regional names (Brandis 1906, F/FRED 1994). 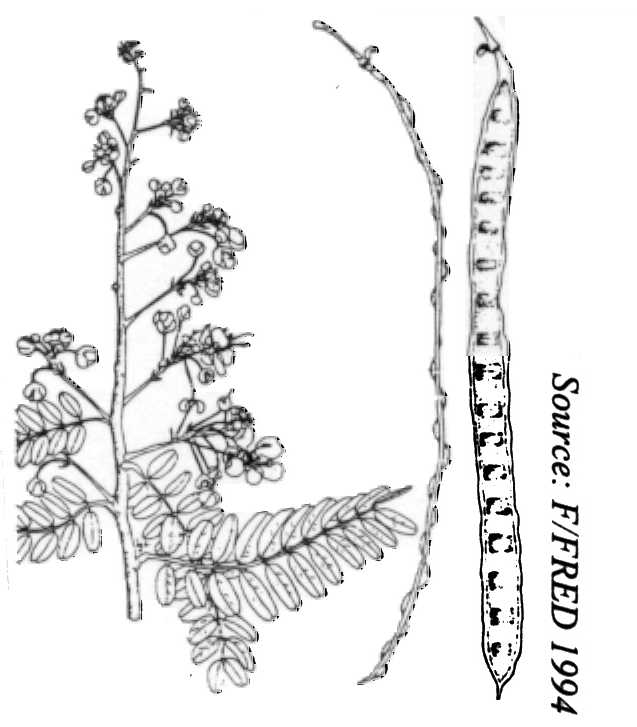 Botany
Senna siamea is a medium sized evergreen tree attaining 5 m height in and conditions (F/FRED 1994). It rarely exceeds 20 m height and 50 cm diameter at breast height (Jensen 1995). It has a dense, evergreen, irregular, spreading crown, a crooked stem, and smooth, grayish bark that is slightly fissured longitudinally. Its young branches have fine hairs. The leaves are pinnately compound with an even leaf arrangement of 7-10 pairs of ovate-oblong leaflets 7-8 cm long and 1-2 cm wide. Its flowers are yellow, borne in large terminal panicles that are often 30 cm long. The flowering period is long, and flowers may often be found at various seasons (Troup 1921). The fruit is a flat pod 15-25 cm long, thickened at both sutures, containing many seeds (Gutteridge 1997).

Ecology
Senna siamea grows well in many environments, but it grows particularly well in lowland tropics having mean annual rainfall of 500-2800 mm (optimum about 1000 mm), mean minimum temperature of 20° C, and mean maximum temperature of 31° C. In semiarid environments with mean annual rainfall of 500-700 mm it will grow only where its roots have access to groundwater and where the dry season does not exceed 4-6 months. Best growth occurs in deep, well drained, rich soils with pH 5.5-7.5. It tolerates well drained lateritic or limestone soils and moderately acid soils (pH 5.0). It is susceptible to cold and frost and generally does not grow well above 1300 in. It requires full sun (Gutteridge 1997, Davidson 1985).

Distribution
Senna siamea is native to South and Southeast Asia, from Thailand and Myanmar (Brandis 1906, Gamble 1922) to Malaysia, India, Sri Lanka, and Bangladesh (Khan and Alam 1996). It has been cultivated worldwide and is naturalized in many locations (Gutteridge 1997).

Uses
Wood. Senna siamea wood is used for furniture, poles, small timber, and fuelwood. It is hard, with specific gravity of 0.6-0.8. The sapwood is whitish, and the heartwood is dark brown to nearly black, with stripes of dark and light (Gamble 1922). The fuelwood and charcoal are highly regarded (calorific value of 4500-4600 Kcal/kg), but the wood produces a lot of smoke (F/FRED 1994).

Other uses. Senna siamea is used in intercropping systems, windbreaks, and shelterbelts. It is also used as a shade tree in cocoa, coffee, and tea plantations (F/FRED 1994). The tree produces an extensive root system in the upper layer of the soil and, in intercropping systems, can aggressively compete for nutrients and water (Gutteridge 1997). The leaves and seeds can be eaten by ruminants (Sahni 1981) but are toxic to non ruminants such as pigs and poultry. The young leaves and flowers are used in curry dishes. The species is also used for the production of honey and tannins.

Silviculture
Propagation. Senna siamea is usually propagated by seed, and plantations are often established by direct seeding (Gutteridge 1997). Mature pods should be collected from the tree when they turn brown, but mature, half opened pods may be collected from beneath the trees (Siddiqi and Ali 1994). After collection, the pods should be dried in the sun for a few days. The seeds are small and greenish-brown, and there are about 37,000-43,000 seeds per kilogram (Katoch 1992, Hor 1993). Clean seeds can be stored in air-tight containers at room temperature for years with little loss of viability. Fresh seeds generally do not need any treatment, but soaking them in cold water for 12 hours accelerates germination (Siddiqi and Ali 1994). Germination is complete within 7-20 days and germination percentage typically exceeds 70 percent. Katoch (1992) dipped the seeds in hot water for 1 minute before soaking them in cold water for 24 hours, and obtained 98 percent germination in 28 days.

In the nursery, seed may be sown in containers, or nursery beds and trays and transplanted to containers after germination. Polybags 10 x 15 cm are widely used in Bangladesh for raising seedlings. Well drained sandy- loam soil (preferably forest topsoil) mixed with manure or well-decomposed compost in a ratio of 3:1 is recommended for nursery use. In addition, 500 g each of triple superphosphate and muriate of potash may be added to every cubic meter of nursery soil. In each polybag, 2-3 seeds should be sown at a depth of 0.5-1.0 cm and covered with a thin layer of sand. Seedling growth is favored by loose soil, sufficient soil moisture, full sunlight, and absence of weeds.

Seedlings are kept in the nursery for 12-14 weeks or until they have attained a height of 25-30 cm. Root pruning and hardening off the seedlings before outplanting is beneficial. Containerized seedlings generally have better survival than direct-sown seedlings, particularly under heavy weed competition. Senna siamea can also be planted as stumps (Evans 1982).

Management. Plantations can be managed by coppicing, lopping, or pollarding (F/FR.ED 1994). For fuelwood, the recommended spacing is 1 x 1 in to 1 x 3 in, with the first harvest in 5-7 years. In hedges for alley cropping or shelterbeits, spacing between plants within rows should be 25-50 cm. For mulch or leaf production, the first cut may be 12-18 months after sowing, followed by 3-4 cuts per year thereafter (Gutteridge 1997). A small dose of NPK fertilizer in the first year helps the seedlings’ initial growth; the fertilizer level varies with the site quality. In the field, weed control is essential during the first 1-2 years. The first weeding should be 2 months after plantation establishment, or depending on the intensity of the weed growth. Weeding of noxious plants such as climbers, creepers, and vines is recommended, but less harmful weeds may be left in the field.

On good sites, S. siamea can grow to a height of 8 in and a root collar diameter of 20 cm in 40 months. In a tree trial in southern Sumatra, the species produced 1200 g of leaves per plant per year. Total yield of wood for timber, poles, and fuelwood may reach 10-15 m3/ha/year (Gut- teridge 1997).

Symbiosis
Senna siamea does not nodulate or fix nitrogen through symbiosis with Rhizobium bacteria.

Limitations
No significant pest or disease damage has been recorded, but minor damage can be caused by the wood rot Ganoderma lucidum (Khan and Alam 1996). Insects that damage seed include Caryedon lineaticollis and Bruchidius maculatipes. Seed-borne fungi reported in Thailand include Aspergillus niger and Curvularia pallescens (Hor 1993). The fungus Phaeolus manihotis occasionally causes damage to the root system (Gutteridge 1997).

Research Needs
Studies are needed to evaluate Senna siamea for timber production and to evaluate its potential as a fodder crop for ruminants.