Sustainable Rice Platform for the U.S 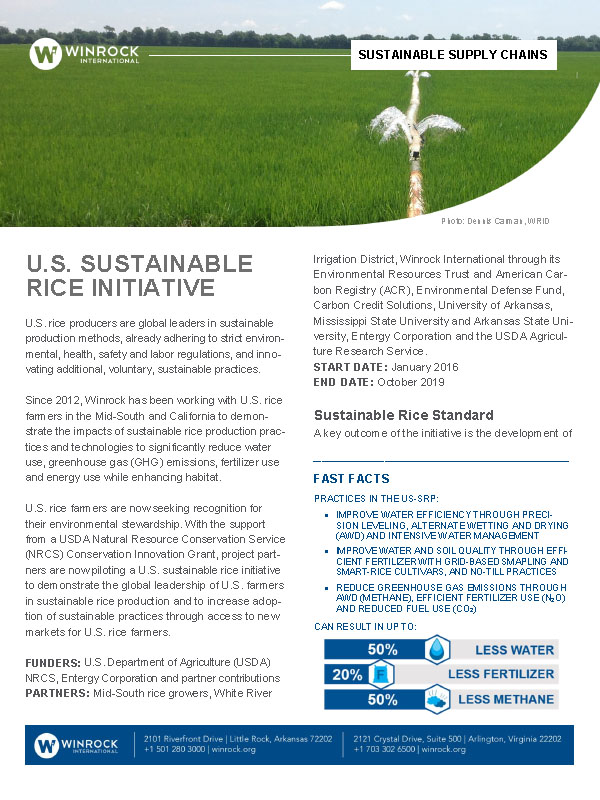 U.S. rice producers are global leaders in sustainable production methods, already adhering to strict environmental, health, safety and labor regulations, and innovating additional, voluntary, sustainable practices. Rice produced in the U.S. is arguably some of the most sustainably produced in the world. However, until now, there was no objective rigorous, and internationally recognized standard against which U.S. producers could make and market the claim of sustainably produced rice.

Since 2012, Winrock – through its Environmental Resources Trust (ERT) enterprise – has been working with U.S. rice farmers in the Mid-South and California to demonstrate the impacts of sustainable rice production practices and technologies to significantly reduce water use, greenhouse gas (GHG) emissions, fertilizer use and energy use while enhancing habitat. However, these now proven sustainability practices are not without additional cost and risk and require market-based solutions to increase adoption.

In 2016, White River Irrigation District (WRID), representing a group of Arkansas rice producers, was awarded a USDA Conservation Innovation Grant (CIG). They partnered with Winrock/ERT and others with the goal of developing an independent, credible, rigorous sustainability standard for U.S. rice to respond to increasing demands from rice buyers to meet sustainable sourcing requirements as well as consumer demands for food safety.

Rather than re-create the wheel, project partners reviewed options for existing sustainability standards that could be adapted for U.S. rice production. Ultimately, the partners decided to focus on the adaptation of the Sustainable Rice Platform (SRP).

Co-convened by the United Nations Environment Program (UNEP) and the International Rice Research Institute (IRRI), the SRP is a global standard for sustainable rice production. The first version of the SRP Standard was published in October 2015 with a focus on small-holder rice growers in southeast Asia.

The SRP was selected for adaptation for the U.S. because it is science-based, focused specifically on rice, supported by a range of international rice buyers and NGOs, and will allow for the comparison of the environmental performance of U.S. rice growers with rice growers from other regions globally.

Partners in the initiative established a Steering Committee of key industry stakeholder representatives to provide and facilitate industry and other interested party input into the adaptation of the SRP for the U.S.

The team followed the SRP Secretariat’s process for developing what are known as “National Interpretation Guidelines, NIGs”, i.e. a version of the SRP Standard questionnaire instrument adapted specifically to a country or region. The Sustainable Rice Platform (SRP) National Interpretation Guideline (NIG) for the U.S.A. (based on the SRP Standard for Sustainable Rice Cultivation v.2.1) was approved for use by the SRP Secretariat in May 2020.

U.S. producers (or producer groups) can assess their operations using the U.S. specific SRP questionnaire (the SRP NIG for the U.S.A.) . U.S. producers will use all other SRP program guidance for Assurance, Internal Management Systems, Chain of Custody, Use of Claims/Logos/Labels and overall program participation all located on the Documents page.